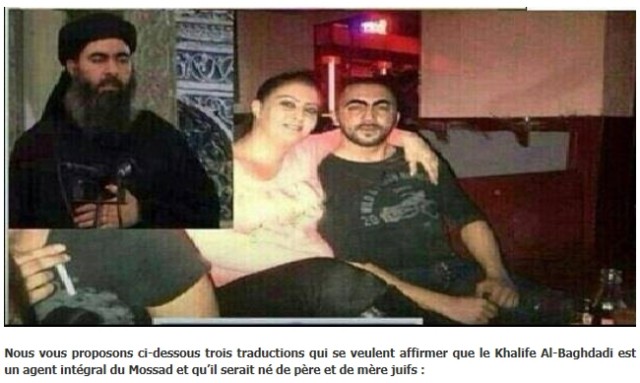 Abu Bakr al-Baghdadi, so-called  ”Caliph,”  the head of ISIL (Islamic State in Iraq and the Levant is, according to sources reputed to originate from Edward Snowden, an actor named Elliot Shimon, a Mossad trained operative.

Simon Elliot (Elliot Shimon) aka Al-Baghdadi was born of two Jewish parents and is a Mossad agent.

We offer below three translations that want to assert that the Caliph Al-Baghdadi is a full Mossad agent and that he was born Jewish father and mother:

The real name of Abu Bakr al-Baghdadi is “Simon Elliott.”

The so-called “Elliot” was recruited by the Israeli Mossad  and was trained in espionage and psychological warfare against Arab and Islamic societies.

This information was attributed to Edward Snowden and published by newspapers and other Web sites: the head of the “Islamic State” Abu Bakr al-Baghdadi, has cooperated with the U.S. Secret Service, British and Israel to create an organization capable of attracting terrorist extremists from around the world.

Another source corroborates this statement, the site Egy-press:

With photo support, a Iranian media discovers the true identity of the Emir Daash, a trained Zionist agent.

The plan: get into the military and civilian heart of the countries that are declared as a threat to Israel in order to destroy to facilitate thereafter, the takeover by the Zionist state on the entire area of the Middle East in order to establish Greater Israel.

Here are the borders of the Zionist project, the “Greater Israel” or “Eretz Israel” for short.

These facts confirm the first that came out a few days ago, confirming that the Caliph Rolex is sent to Israel to sow chaos in neighboring countries the Zionist entity. Please note that EIIL announced it a few days ago that, to want to now take the “barbarians Jews”, a reference to Zionists besiege Gaza.

Practice! Having devastated the area of Israel, it will now allow the Americans and the Israelis to show the fingers as bloody terrorists to shoot at faster to defend the Zionist state, while the same let them proliferate and act with impunity for over two months now. Prepare a project they probably from the famous Arab Spring with the destabilization of Iraq, Sudan, Tunisia, Egypt, Libya, Syria and Mali (among others). Clever!

After gathering the most fanatical of the world in one place, a veritable army of the devil is formed, filled with bloodthirsty murderers without mercy for their victims, they murder with a vengeance and in cold blood, filming their atrocities and relaying on social networks.

Got the scum. “By way of deception, thou shalt do war.” Remember that the Mossad agents were caught red handed on 9/11 were also dressed as Arabs?

oh yeah sure all that press tv says is right. So, the French who were the ones who actually provided Israel with nukes are now snitching on the Mossad. And of course, from the source who came with the same story about bin laden being a cia asset, the caliph or al Baghdadi or whatever his name is, is a Mossad agent and the mujahedeen that surround him know nothing about it. yep whatever press tv. Don’t forget to Send a check to vt

i am a muslim and i am from palestine. and its shannan not shanna. Formelrly known as the avatar banned from vt because i argue in favour of the warriors in syria, any more questions?

Infinite Unknown @Khaled Shannan (who will probably never read this):

if you support the Al-Nusra (=Al-Qaeda) terrorists destroying Syria, then Gordon Duff calling you ‘not very intelligent’ was indeed a big compliment as you are without a shadow of a doubt beyond help.

You are in my opinion one of those brainwashed Muslims that will allow and even help the elitists creating the great war (WW3) together with your brainwashed Christian and the Zionist friends.