– All of the Countries which the U.S. “Regime Changed” – Iraq, Afghanistan and Libya – Have Descended into Brutal Chaos (Washington’s Blog, July 29, 2014):

Quantifying the Effects of Regime Change

Since 2001, the U.S. has undertaken regime change in Iraq, Afghanistan and Libya.

All 3 countries are now in chaos … and extremists are more in control than ever.

In Iraq, hardcore Islamic jihadis known as ISIS have taken over much of the country – shown in red as the new “Islamic State” or self-described caliphate – using captured American weapons: 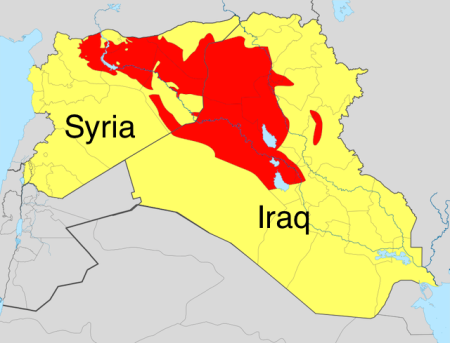 Christians are being rounded up and killed, and Christian leaders in Iraq say the end of Christianity in Iraq is “very near”. But as we documented in 2012, Saddam Hussein – for all his faults – was a secular leader who tolerated Christians.

Libya has also descended into absolute chaos.   We reported in 2012:

Al Qaeda is now largely in control of Libya.  Indeed, Al Qaeda flags were flown over the Benghazi courthouse once Gaddafi was toppled.

(This is – again – in contrast to toleration of Christians under Gadaffi.)

The Guardian noted in March:

According to Amnesty International, the “mounting curbs on freedom of expression are threatening the rights Libyans sought to gain“. A repressive Gaddafi-era law has been amended to criminalise any insults to officials or the general national congress (the interim parliament). One journalist, Amara al-Khattabi, was put on trial for alleging corruption among judges. Satellite television stations deemed critical of the authorities have been banned, one station has been attacked with rocket-propelled grenades, and journalists have been assassinated.

Ever since the fall of [Gadaffi’s] dictatorship, there have been stories of black Libyans being treated en masse as Gaddafi loyalists and attacked. In a savage act of collective punishment, 35,000 people were driven out of Tawergha in retaliation for the brutal siege of the anti-Gaddafi stronghold of Misrata. The town was trashed and its inhabitants have been left in what human rights organisations are calling “deplorable conditions” in a Tripoli refugee camp. Such forced removals continue elsewhere. Thousands have been arbitrarily detained without any pretence of due process; and judges, prosecutors, lawyers and witnesses have been attacked or even killed. Libya’s first post-Gaddafi prosecutor general, Abdulaziz Al-Hassadi, was assassinated in the town of Derna last month.

When residents of Benghazi – the heartland of the revolution – protested against militia rule in June last year, 32 people were killed in what became known as “Black Saturday”. In another protest in Tripoli last November, 46 died and 500 were injured.

Under militia rule, Libya is beginning to disintegrate. Last summer forces under the command of the warlord Ibrahim Jadran took control of eastern oil terminals …. These forces which hijacked a oil tanker this month, prompting threats from Libya’s prime minister that it would be bombed until US forces captured it this weekend. Clashes have broken out in Jadran’s home town of Ajdabiya. In painful echoes of Iraq’s nightmare, a car bomb exploded at a Benghazi military base last week and killed at least eight soldiers, and Libya’s main airport was shut on Friday after a bomb exploded on its runway.

One of the great perversities of the so-called war on terror is that fundamentalist Islamist forces have flourished as a direct consequence of it. Libya is no exception, even though such movements often have little popular support. The Muslim Brotherhood and other elements are better organised than many of their rivals, helping to remove the prime minister, push through legislation, and establish alliances with opportunistic militias.

Ominously, Libya’s chaos is spilling across the region. The country is awash with up to 15 million rifles and other weapons, and a report by the UN panel of experts this month found that “Libya has become a primary source of illicit weapons“. These arms are fuelling chaos in 14 countries, including Somalia, the Central African Republic, Nigeria and Niger.

There is a real prospect of the country collapsing into civil war or even breaking up. Unless there are negotiated settlements to its multiple problems, Libya will surely continue its descent into mayhem, and the region could be dragged into the mire with it.

No wonder western governments and journalists who hailed the success of this intervention are so silent. But here are the consequences of their war, and they must take responsibility for them.

28-year CIA veteran Paul Pillar – who rose to be one of the agency’s top analysts – wrote in May:

Just when one might have thought the mess in Libya could not have gotten worse, it has.

Saudi Arabia and several other Arab states have evacuated their diplomats from Libya, the United States is preparing for possible evacuation of U.S. personnel, and the country appears on the brink of a larger civil war.

Those in Libya closest to being called secular liberals seem to be associated with military officers of the old regime.

The intervention already has negatively affected U.S. interests, particularly in providing a disincentive to other regimes to do what Gaddafi did in negotiating an end to involvement in terrorism and an end to production of unconventional weapons.

And things have only gottenworse since then.

(It should be remembered that the U.S. helped sew the seeds of chaos in several ways.  Not only did we engage in direct military intervention against Gadafi, but also – as confirmed by a group of CIA officers – armed Al Qaeda so that they would help topple Gaddafi.)

Opium production is at an all-time high under the American occupation of Afghanistan.

And the New York Times reports this week that the Taliban are currently making huge gains in Afghanistan … in some cases expanding even beyond their traditional areas of influence prior to 2001:

The Taliban have found success beyond their traditional strongholds in the rural south and are now dominating territory near crucial highways and cities that surround Kabul, the capital, in strategic provinces like Kapisa and Nangarhar.

U.S. troops are just now leaving, and so the worst may be still to come.  In addition – as we discuss below – the U.S. previously imposed regime change on Afghanistan … and the results were bad.

The U.S. carried out regime change in Iran in 1953 … which led to radicalization in the country. Specifically, the CIA admits that the U.S. overthrew the moderate, suit-and-tie-wearing, Democratically-elected prime minister of Iran in 1953. (He was overthrown because he had nationalized Iran’s oil, which had previously been controlled by BP and other Western oil companies). As part of that action, the CIA admits that it hired Iranians to pose as Communists and stage bombings in Iran in order to turn the country against its prime minister.

If the U.S. hadn’t overthrown the moderate Iranian government, the fundamentalist Mullahs would have never taken over. Iran has been known for thousands of years for tolerating Christians and other religious minorities.

Hawks in the U.S. government been pushing for another round of regime change in Iran for decades.

Hillary Clinton and then-president Jimmy Carter’s National Security Adviser have both admitted on the record that the U.S. previously carried out regime change in Afghanistan in the 1970s by backing Bin Laden and the Mujahadin … the precursor to Al Qaeda.

And look how thatturned out.

The U.S. has heavily backed the Islamic rebels in Syria in an attempt to implement regime change in that country.  The result?

As shown by the map above, they’ve taken a third of the country as part of their “caliphate”

And the jihadis are now busily crucifying, beheading and slitting the throats of Christians. (Yup, Syria was previously known for tolerating Christians.)

Haven’t These Wars Made It Safer at Home?

But haven’t all of these wars made it safer here at home?   Nope … a top Pentagon officials says we’re no safer – and perhaps less safe – after 13 years of war.

But the U.S. doesn’t always back regime change. Sometimes we work to support regimes …

… Unfortunately, they tend to be some of the most brutal tyrannies on the planet.

Postscript:  We can probably add Ukraine to the list of regime changed countries falling into chaos and murderous extremism, given that: