Does it feel like you’re poorer? There is a simple reason why – you are! According to a new study by the Russell Sage Foundation, the inflation-adjusted net worth for the typical household was $87,992 in 2003. Ten years later, it was only $56,335, or a 36% decline… Welcome to America’s Lost Decade.

Simply put, the NY Times notes, it’s not merely an issue of the rich getting richer. The typical American household has been getting poorer, too.

The reasons for these declines are complex and controversial, but one point seems clear: When only a few people are winning and more than half the population is losing, surely something is amiss. 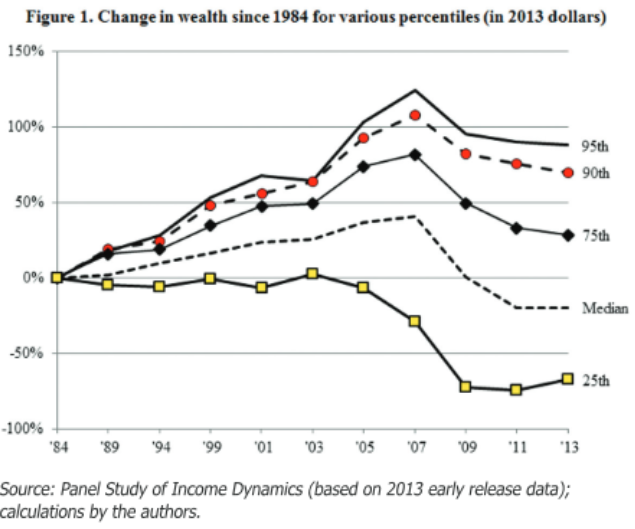 As Russell Sage Foundation concludes, through at least 2013, there are very few signs of significant recovery from the loss of wealth experienced by American families during the Great Recession. Declines in net worth from 2007 to 2009 were large, and the declines continued through 2013. These wealth losses, however, were not distributed equally. While large absolute amounts of wealth were destroyed at the top of the wealth distribution, households at the bottom of the wealth distribution lost the largest share of their total wealth. As a result, wealth inequality increased significantly from 2003 through 2013; by some metrics inequality roughly doubled.

The American economy has experienced rising income and wealth inequality for several decades, and there is little evidence that these trends are likely to reverse in the near-term.

It is possible that the very slow recovery from the Great Recession will continue to generate increased wealth inequality in the coming years as those hardest hit may still be drawing down the assets they have left to cover current consumption.

The inequality-battler-in-chief remains unaware of the greatest irony of this surging rich-getting-richer as poor-get-poorer society: