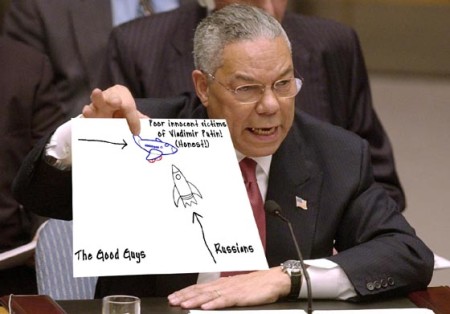 Washington has claimed that Moscow is ‘culpable’ in the Malaysian plane crash in Ukraine, as it was Russian authorities that gave the rebels heavy weapons and training. However, the claim was only backed up by reports in social media.

“We’ve seen that there were heavy weapons moved from Russia to Ukraine, that they have moved into the hands of separatist leaders,”said White House spokesman Josh Earnest. “And according to social media reports, those weapons include the SA-11 [Buk missile] system.”

Once again citing “some social media reports,” Earnest added that Russia trained the self-defense forces operating in the Donetsk and Lugansk regions.

“We do know that it was an SA-11 [Buk missile] system that was in the hands of separatists that brought down the Malaysian airliner last week. We know that Russia had been involved in training separatists to use that system.”

He added that the White House also knows that the Malaysia Airlines jet was brought down by a missile that was fired from the ground in an area “that was controlled by separatists and in an area where the Ukrainians themselves were not actually operating anti-aircraft weapons at that time.”

“So that is why we have concluded that Vladimir Putin and the Russians are culpable to this tragedy… They have been responsible for supplying the terrorists with these — or the separatists with these weapons.”

Earnest said he could not provide the latest intelligence materials, nor speak for the US intelligence service. However, he claimed that the US authorities have proof that Russia fired “heavy weapons” at Kiev troops.

“According to some social media reports but also to some intelligence assessments that have been released by the intelligence community, reports that there has been firing of Russian heavy weapons from the Russian side of the border at Ukrainian military personnel,” the state department spokesperson said.

Earnest is not the only one who is pointing the finger of blame for the Malaysia airline crash at Russia. Hillary Clinton, a former United States’ secretary of state, also claimed that it was Putin and the Russians who downed the Malaysian plane in eastern Ukraine.

“I think, if there were any doubt it should be gone by now, that Vladimir Putin, certainly indirectly – through his support of the insurgents in eastern Ukraine and the supply of advanced weapons and, frankly, the presence of Russian special forces and intelligence agents – bears responsibility for what happened,” she said in an interview with CNN.

Russia: US persists with slander campaign

Moscow, in its turn, criticized the recent comments from the White House, saying that the US has no proof of Russia’s involvement in the Malaysian airplane crash, except doubtful information from social networks.

Washington “doesn’t provide any proof or even the links to the facts which could be viewed and cited. The White House is mentioning certain “intelligence data” which couldn’t be shown and what is more ridiculous – “information from social media.”

According to the ministry, Washington has evidence drawn from “anti-Russian speculations” taken from the internet .

“It is regrettably that at the same time the US continue pushing Kiev to suppress the complaints of the Russian-speaking population. There is only one conclusion: the Obama administration is fully responsible for Ukraine’s conflict and its consequences.”

Tensions between Moscow and Washington spiraled last week, after the Malaysia Airlines plane carrying 298 people crashed in eastern Ukraine on July 17. The West has accused self-defense forces of shooting down the jet. The US believes the militias are supported by Russia.

Moscow has denied the accusations, saying it spotted a Kiev military jet near the Malaysian Boeing just before the tragedy occurred.