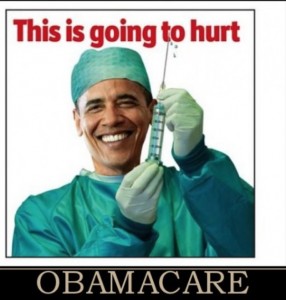 Although it hasn’t been a focus for a while, the incompetent disaster that has been the ObamaCare rollout has been well documented on this site.

Here are just a few posts on the subject:

Well the hits just keep on coming. The U.S. Government Accountability Office (GAO), recently conducted a study in which investigators attempted to use fake identities to sign up for subsidized healthcare under ObamaCare. The results are frightening. All but one phony applicant was successful. Moreover, the GAO more broadly notes that “about 2.6 million ‘inconsistencies’ existed among applicants who had chosen a health plan.”

In undercover tests of the new federal health insurance marketplace, government investigators have been able to procure health plans and federal subsidies for fake applicants with fictitious documents, according to findings that will be disclosed to lawmakers Wednesday.

The results of the inquiry by the Government Accountability Office are evidence of still-imperfect work by specialists intended to assist new insurance customers as well as government contractors hired to verify that coverage and subsidies are legitimate. The GAO also pointed to flaws that linger in the marketplace’s Web site, HealthCare.gov.

According to testimony to be delivered before a House Ways and Means subcommittee, undercover GAO investigators tried to obtain health plans for a dozen fictitious applicants online or by phone, using invalid or missing Social Security numbers or inaccurate citizenship information.

All but one of the fake applicants ended up getting subsidized coverage — and have kept it. In one instance, an application was denied but then approved on a second try. In six other attempts to sign up fake applicants via in-person assisters, just one assister accurately told an investigator that the applicant’s income was too high for a subsidy.

The GAO’s account of fictitious applicants obtaining subsidized coverage goes beyond a related problem that surfaced this spring and that the investigators also cited: The government may be paying incorrect insurance subsidies to a significant share of the 5.4 million Americans who signed up for health plans for this year through the federal marketplace.

The GAO testimony contains updates on that problem, saying that, as of mid-July, about 2.6 million “inconsistencies” existed among applicants who had chosen a health plan and that 650,000 of them had been resolved.

Just more proof of a completely disconnected and incompetent government. As if you needed any more evidence.