You can be forgiven for thinking that the world is a pretty terrible place right now, exclaims JPMorgan’s Michael Cembalest. With 11.7% of the world’s population currently at war (and a considerably larger percentage seemingly on the verge), it seemed an appropriate time to summarize the main geopolitical risk points in the world. 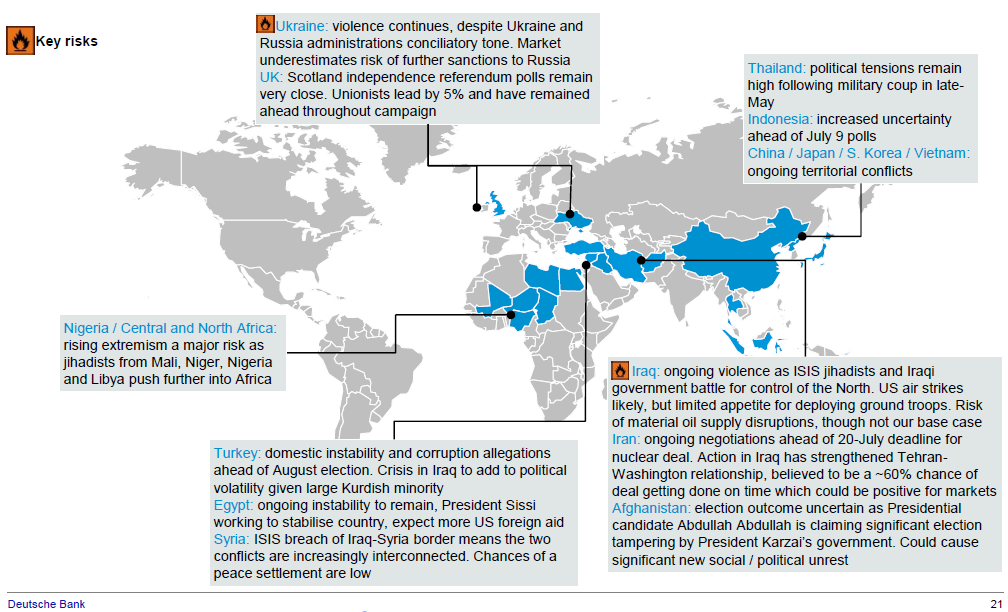 As Cembalest notes, the list is long… and growing

The downing of a Malaysian jetliner in eastern Ukraine and escalating sanctions against Russia, the Israeli invasion of Gaza, renewed fighting in Libya, civil wars in Syria, Afghanistan, Iraq and Somalia, Islamist insurgencies in Nigeria and Mali, ongoing post-election chaos in Kenya, violent conflicts in Pakistan, Sudan and Yemen, assorted mayhem in central Africa, and the situation in North Korea, described in a 2014 United Nations Human Rights report as having no parallel in the contemporary world. Only in Colombia does it look like a multi-decade conflict is finally staggering to its end. 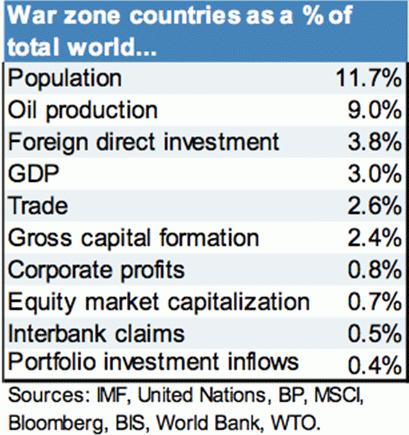 For investors, strange as it might seem, such conflicts are not affecting the world’s largest equity markets very much (for now). Perhaps this reflects the small footprint of war zone countries within the global capital markets and global economy, other than through oil production.

While markets maybe ignorant of the risk flares, economies are not as today’s durable goods orders in the US show, even the cleanest dirty shirt is starting to get soiled.

1 thought on “11.7% Of The World’s At War: Global Geopolitical Risk Mapped”