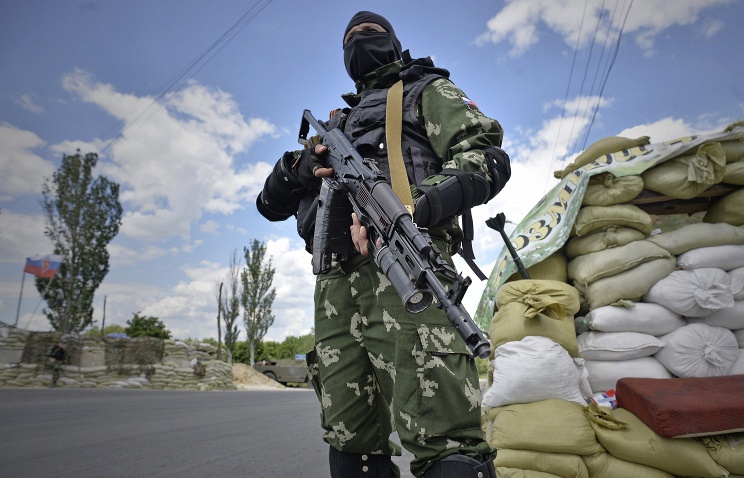 – Five Reasons The Situation in Eastern Ukraine is About to Become Much More Dangerous (SCG, News, July 17, 2014):

Though this latest phase in the Ukraine crisis might seem like a repeat of recent events, this round is more dangerous for a number of reasons. Here are five of them.

This past week the mainstream coverage of the Ukrainian civil war has focused on Kiev’s move to encircle Donetsk. However there are reports coming out of the east right now that indicate that the Ukrainian troops may have just walked into a trap. Specifically the separatists claim to have encircled western troops and have completely stalled their advance.

Note that this report is coming from those who openly support the separatists, and the claim that Kiev’s forces have been encircled has yet to be confirmed by any major outlets, however Reuters does confirm that the Ukrainian troops have suffered heavy casualties in the past 24 hours, and there are separate reports that the separatists have managed to gain control of a new town on the Russian border within that same time period.

The big picture here is that Kiev’s forces may have overextended their forces and supply lines after being lulled into a false sense of momentum by the withdrawal of separatist forces from Slavyansk. There are some who are even speculating that the retreat was a trap. It’s too early to know for sure if this assessment is accurate, but it is plausible. This is a common pattern in armed confrontation (The writings of Erwin Rommel regarding modern military tactics are very educational in this regard).

The response from Washington, to lay the blame on Putin and to impose a new round of sanctions against Russia, was so predictable you may have the impression that you’re watching a rerun from this Spring. Russia of course, reiterated their previous response: that these economic bully tactics will just have a boomerang effect. All par for the course. This phase in the crisis, however, is far more dangerous than the previous ones for a number of reasons.

Reason number one: a diplomatic solution is almost impossible at this point. Poroshenko talked a good game before coming into office, and Putin had expressed optimism after the two discussed the crisis in June. However, regardless of what was said, in the following month the Ukrainian military went on to engage in a full out bombardment of east Ukraine using airstrikes and heavy artillery. This shelling was indiscriminate, and the civilian casualties were very high. For a glimpse of what this assault looked like on the ground watch the video below (Warning: extremely brutal footage).

And this doesn’t even begin to address the full scale of the atrocities committed by western forces since this started. For example we’ve since had the massacre in Odessa which both Kiev and Washington covered up completely.

These war crimes being committed by Kiev have done left a deep psychological mark on the region, building intense hatred and distrust for the government in Kiev.

Reason number two: Putin is under heavy pressure domestically to do something to protect the Russian speakers of east Ukraine. While Kiev has been calling wolf about an imminent ground invasion periodically since this crisis began, word on the street is that Russia is considering imposing a no-fly zone in east Ukraine. Putin obviously doesn’t want to go down this road. If he did, the no-fly zone would have been implemented months ago. However if Russia does take such a measure NATO will interpret it as an act of war and the stakes will be ratcheted up yet another notch.

Reason number three: If Kiev is able to regroup and lay siege to Donetsk this will be an extremely brutal confrontation. Donetsk is a city with a population of more than a million people. The separatists have indicated that they are digging in for a fight to the death, and this would mean street to street, urban warfare. I thought briefly about comparing this to the U.S. military’s assault on Fallujah Iraq, but the idea of putting the Ukrainian military in the same class as U.S. forces is laughable. The idea the separatists could put up as fierce of a resistance as the Iraqis, on the other hand, is not. The separatist, though lacking an air force or an armored division, have still managed to down numerous Ukrainian aircraft, and according to reports and footage on the ground the separatists now seem to have Grad rockets at their disposal (see video below).

The presence of Grad rockets, and their effective use in combat operations (which implies training) may in fact indicate an escalation of covert support from Russia. Not surprising in the current context.

Reason number four: Russia is not likely to stand by and watch Kiev lay siege to Donetsk without taking action. Already we’ve seen threats coming out of Moscow hinting at a possible military response to recent moves made by the Ukrainian military. Particularly the recent shelling of a Russian town, the murder of several Russian journalists, and the incursion of Ukrainian armored vehicles into Russian territory (all accidents of course). While these incidents may seem trivial in the scheme of things, the fact of the matter is that they provide an official justification for a military response, and when it comes to war, official justifications play a far more important role than governments will ever admit.

Many analysts have speculated that the Ukrainian crisis is a trap laid by the U.S. and NATO to entice Russia to invade Ukraine and thereby weaken Russia on multiple levels. Indeed, this line of reasoning seems to be influencing Putin’s decision making process, even to the point that he is resisting domestic pressure to protect the eastern Ukrainians. Again, Putin clearly doesn’t want this situation to escalate to a full out armed conflict between Ukraine and Russia, otherwise he would have responded already, however to assume that his previous decisions can be used to predict his future actions would be very foolish.

Given the Ukrainian military’s bombing of residential areas in eastern Ukraine, Russia now has a credible argument for intervention if Kiev attempts to repeat this tactic in Donetsk. Though it’s unlikely that Russia would make the mistake of launching a full ground offensive, airstrikes on Ukrainian artillery positions and the imposition of a no-fly zone would be more than enough to tip the scales in the favor of the separatists. The United States would of course be tempted to respond in kind, but their options would be limited. It’s not in Washington’s interest to draw attention to Kiev’s military assault on the east of Ukraine. It’s bad PR, and that’s why the corporate media has imposed a virtual black out on the topic. Condemning Russia for interfering with the shelling of residential areas would open up the debate, and expose NATO’s participation in blatant war crimes.

Reason five: If this situation continues to go south, Washington may double down and push the envelope even farther in terms of covert operations. Indeed we’re seeing think tanks like The Stratfor Institute call for an all out thrust to counter Russia (specifically on the issue of Moldova) which they are very clear that covert means should be employed. Anyone who has watched the U.S. State Department at their work, knows that there are very few limits to what this may entail.

All speculation aside, it should be clear that this situation is highly volatile, and one single event could spark a chain reaction that has unimaginable consequences. As you watch this insanity unfold, always remember how this really started:

Update: I spent all day on July 17th working on this article, and right when I’m getting ready to post it the news breaks that a civilian flight was shot down over east Ukraine. This could get very, very interesting.