“The unsubsidized cost of Obamacare for two 60-year old healthy adults ($23,244 annually) for an inferior plan to what we had before exceeds the cost of rent or a mortgage for the majority of Americans. Please ponder this for a moment: buying healthcare insurance under Obamacare costs as much or more as buying a house.”

Here’s a two-word summary of why the American healthcare system is fundamentally broken and cannot be fixed with policy tweaks: perverse incentives.

If you type sickcare in the custom search box on this site, you get 10+ pages of articles. I have covered healthcare/sickcare in depth for many years. I have many correspondents within the sector (doctors and nurses), and have paid the unsubsidized costs of insurance as an employer or as a self-employed worker for 30+ years.

Here are two charts and three stories of many I’ve published over the years: 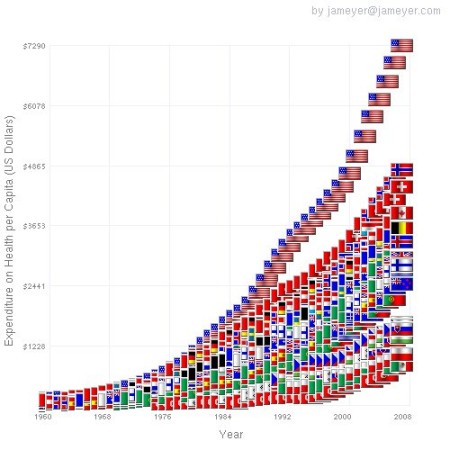 ObamaCare: The Neutron Bomb That Will Decimate the U.S. Economy (November 21, 2013)

Obamacare is a Catastrophe That Cannot Be Fixed (December 6, 2013)

The unsubsidized cost of Obamacare for two 60-year old healthy adults ($23,244 annually) for an inferior plan to what we had before exceeds the cost of rent or a mortgage for the majority of Americans. Please ponder this for a moment: buying healthcare insurance under Obamacare costs as much or more as buying a house.

Here’s a two-word summary of why the American healthcare system is fundamentally broken and cannot be fixed with policy tweaks: perverse incentives. Physician Ishabaka provides a telling example of how perverse incentives operate beneath the surface of what patients (and clueless politicos) see:

Today I saw a 16 year old boy who weighed 310 pounds – the wave of the future – will have type II diabetes by his 20’s, probably have at least one leg amputated by his 40’s.

I got home – and there was a fax in my fax machine. It was from a medical device company, promoting their new machine which is used to test for peripheral autonomic neuropathy (a disease of the nerves). There was NO MENTION of how this device would help patients.

What WAS mentioned was that insurance and Medicare pay for this test, and that no pre-authorization is required. It was stated the average Medicare reimbursement is $200. The “C.P.T. code” – the code doctors use for billing insurance – for the test was included, and a statement that the device would return its initial cost within 3 months was included – also a statement that the test takes THREE MINUTES.

Now, $200 for three minutes work is pretty sweet. In all of medicine “doing things” pays more than “thinking”. That’s why surgeons on average earn twice or more the income of primary care doctors. Surgery isn’t hard – if you can do carpentry, you can do surgery. The thinking is the hard part – but it doesn’t pay.

Now – here’s the crux of the matter – peripheral autonomic neuropathy is very common in diabetic patients – and we are having an explosion in the population of people with diabetes. Therefore there are a LOT of patients with peripheral autonomic neuropathy, and a lot more coming down the pipe. Seeing an established diabetic patient, going over their blood sugar results, other tests, diabetes medications, diet, and exercise takes 15 – 20 minutes and pays FAR LESS than $200 – but actually HELPS patients. This benefit has been scientifically proven.

As a general rule, medical tests should only be done if they are likely to HELP a patient – either due to the fact that they may guide treatment, or give the patient useful information – an example might be a test that shows a patient has incurable cancer with a life expectancy of three months (I have had to tell a guy this at least once, based on the results of my physical examination, which suggested cancer, and a CT scan, which revealed that the cancer originated in the pancreas, and had spread to the liver) the information doesn’t affect the patient’s treatment, but does help him arrange his life – i.e. that he should make sure his will is up to date, say goodbye to family and friends, etc.

Here is the deal – for 99.9% of diabetics there is NO TREATMENT for peripheral autonomic neuropathy, and NO BENEFIT for the patient to know if they have it or not. In other words, almost all the time – this test is completely and utterly useless. There are a small amount of diabetic patients with serious, treatable peripheral autonomic neuropathy – but in them, the diagnosis is best made by physical examination and symptoms – not by this test.

So there you have it – a worthless test that apparently Medicare and other health insurances WILL pay for, that I could use on a whole bunch of patients to make a LOT of money, in very little time.

In fact, Medicare pays about $50 – $60 for the established diabetic patient visit I referenced earlier – or about one quarter what I’d make from doing this worthless test. Not only could I test all my diabetic patients – if they tested negative, I could re-test them at yearly intervals, keep making my $200 a pop, all for no benefit whatever to my patients.

I thought this was the most crystal clear example of mal-investment in the health care field I’ve come across in some time. The fax is in my re-cycling bin, waiting to be picked up by the city today. I’m not buying one of the testing machines. Oh well – I’ll never own an Porsche Turbo – and I love fast cars!

In conclusion – there are plenty of doctors who jump at this kind of profit-making opportunity – I know several. One in particular does an echocardiogram on EVERY SINGLE patient he admits to the hospital – he gets paid to read the results of the echocardiogram – which takes little time, and is very lucrative. An echocardiogram CAN be a very useful test in patients with certain heart conditions, or in who certain heart conditions are suspected (can confirm or refute the clinical suspicion – which can dramatically change the patient’s treatment) – but an echocardiogram on EVERY patient is a rip-off, plain and simple.

I don’t know how he gets away with it, but he does – he’s a multimillionaire. I’m not. Sometimes I wonder who is the smarter doctor.

Meanwhile, elsewhere in the world, equivalent care is affordable. Since the advanced, developed nations of Taiwan and Japan both provide care for one-third of what the U.S. spends per person, we already know that fully 65% of what we spend on sickcare is waste, fraud, defensive medicine (i.e. medically worthless tests given to stave off future lawsuits), profiteering, racketeering and paper-shuffling.

I’ve been visiting the Philippines and came down with an ear infection. I tried to allow my immune system do the work, but after 3 days of no improvement my wife dragged me to the hospital, Makati Medical Center (MMC). MMC is one of two-or-three hospitals that the well-to-do go to when the need arises. Just as modern as the average US city-hospital. I have no health insurance in The Philippines.

The doctor spoke excellent English. The tools and technique used was pretty much as I expected (having had a history of ear infections in life). The US dollar cash price (after the exchange rate) I paid was $18.44 for the office visit and $30.54 for one weeks worth antibiotics, a vial of ear drops, and five pills for pain (as needed). A week later, I’m OK; no infection, no pain.

The US medical cartel has a racket, eh? But we know that.

I have direct experience of similar costs in Thailand and China for care that was as good or better than in the U.S. (i.e. minimal waiting and paperwork, caregivers were polite, care was efficient, test machines of the exact same type and brand as in the U.S., etc.).

Correspondent M. submitted this report on the change in U.S. healthcare from a non-profit community-based hospital system to a centralized profit machine:

I reviewed this same topic with 3 different MD practitioners in recent months and ALL said the same thing!… namely, that medical care transitioned from local community MD non-profit run, into psychopath MBA profit run (at the hospital level) starting in the 1970s. They emphasized or gave examples of how the effective local non-profit MD run community hospital was taken over by for profit MBAism, typically with huge buyouts of the previous MD non-profit operators. Medical care became just another avenue for system wide racketeering via transition from local to larger system (i.e. racketeering).

The solution as you say: return to local community.

Large-scale rackets like sickcare cannot survive without a Central State that collects taxes and funnels the proceeds to the racketeers, who of course have bought political influence with their plundered profits. This is a self-reinforcing system that cannot be reformed in any meaningful way. It will bankrupt the nation and then we’ll have a chance to start over with an affordable, efficient, fair system that is focused on prevention and health rather than profiting from disease, fraud and lawsuits