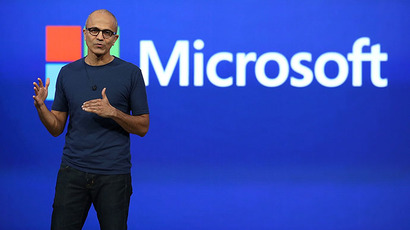 While the news was reported earlier this week, it is perhaps notable that what was once considered the leading US tech company has also succumbed to the great “jobless” US recovery (in which the US economy is somehow adding 200K+ jobs every month even as it is firing millions). Furthermore, what was supposed to be 6,000 layoffs has just tripled to 18,000, which also happens to be the largest round of layoffs in MSFT history, surpassing the previous record of 5,800 set back in 2009.

Microsoft Corp. today announced a restructuring plan to simplify its operations and align the recently acquired Nokia Devices and Services business with the company’s overall strategy.

These steps will result in the elimination of up to 18,000 positions over the next year. Of the total, about 12,500 professional and factory positions will be eliminated through synergies and strategic alignment of the Nokia Devices and Services business acquired by Microsoft on April 25.

The actions associated with the plan are expected to be substantially complete by Dec. 31, 2014, and fully completed by June 30, 2015.

If only Tim Geithner had qualified his “Welcome to the Recovery” August 2010, NYT oped a little bit better, none of this would have been a surprise. Actually, it isn’t a surprise at all. And now, back to MSFT stock which surges on the news and lifts the market to recorder highs even as thousands more end up on the street, which has largely been the whole story of the “recovery” to date.