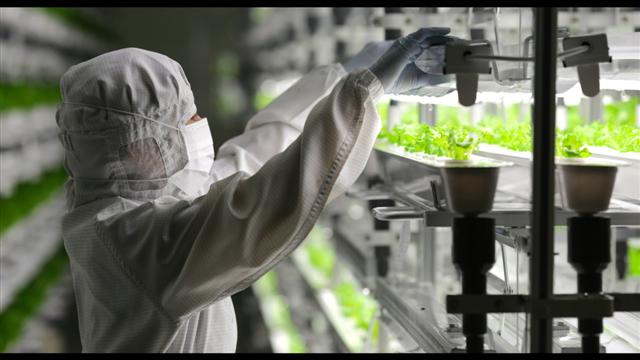 Struggling to Compete with Rivals in South Korea or China, Fujitsu, Toshiba and Others Try Selling Vegetables, Too

AIZU-WAKAMATSU, Japan—Haruyasu Miyabe used to oversee a computer-chip production line at a Fujitsu Ltd. 6702.TO -0.52% plant here. One day last year, the plant manager told Mr. Miyabe to prepare for a career change.

“Starting tomorrow, you are going to make lettuce,” he recalls being told.

Amid troubled times in the Japanese electronics industry, Fujitsu shut one of the three chip-making lines at the plant in 2009. Now, in a sterile, dust-free clean room that once built the brains of high-tech gadgets, Mr. Miyabe and a staff of about 30 tend heads of lettuce.

“We thought about a data center or a call center, but it was difficult to get approval,” says Mr. Miyabe, who takes a proprietary pride in the new product. “I kind of feel attached to the lettuce as it grows. It’s cute.”

Mr. Miyabe and Fujitsu aren’t alone in this circuit-boards-to-plowshares transition. Struggling to compete with rivals in South Korea or China in businesses like televisions and smartphones, a range of Japanese electronics giants are converting idled factories to agriculture.

Last month, as Fujitsu began selling lettuce from the Aizu-Wakamatsu plant, Toshiba Corp. 6502.TO -1.06% said it would begin growing vegetables inside a floppy disk factory near Tokyo that hasn’t been used for two decades. Later this year, Panasonic Corp. 6752.TO -0.65% will start selling computer-program controlled greenhouses to grow spinach and other vegetables. And Sharp Corp. 6753.TO -1.54% last year began laboratory tests to grow strawberries at an indoor site in Dubai using its lighting and air-purifying technologies.

The government of Prime Minister Shinzo Abe is encouraging the development. Previous administrations merely propped up unprofitable businesses, but Mr. Abe wants them to turn over a new leaf. He also wants to restructure Japanese agriculture, which is dominated by aging family farmers working tiny plots of land, a system that results in high food costs. If big companies move into farming, Mr. Abe reckons, prices will fall.

Fujitsu initially got aid for its Aizu-Wakamatsu project, in the Fukushima prefecture, from a project helping the Fukushima region rebuild after the 2011 earthquake and tsunami. Fukushima is one of the biggest agricultural regions in Japan. The project is more than 60 miles from the nuclear plant damaged in that disaster.

More recently, the government has expanded subsidies nationwide for advanced agriculture, and the number of plants like Fujitsu’s using high-tech methods has quadrupled over the past three years to more than 380, according to government figures.

At the Fujitsu plant, workers dress in lab coats and face masks to preserve the sterile environment in which the lettuce is grown. Instead of soil, the plants mature in water that is drip-fed with fertilizer and nutrients.

Growing the lettuce in this way lets Fujitsu reduce the level of potassium, making it palatable to the growing number of elderly Japanese who have kidney ailments that prevent them from processing the metal, Fujitsu says.

Because the lettuce is grown in a bacteria-free space, it keeps much longer than ordinary produce—up to two months if refrigerated, the company says.

“Because it stays fresh for so long, this will give us a competitive edge when we ship it for export,” says Akihiko Sato, a manager at the plant, showing that an economic model honed during the days of the transistor radio, when overseas sales fueled growth, retains its appeal.

But high-tech lettuce comes at a price. At a supermarket near Tokyo, a small bag of Fujitsu lettuce was selling for $3, about $1 more than a whole head of ordinary lettuce.

Toshiba says it needs production scale to make a profit in the business. It will aim to grow three million heads of lettuce a year and annual sales are estimated at $2.9 million by fiscal 2015. It plans to expand the business to other parts of Asia and the Middle East where climate volatility and poor water quality make it hard to produce vegetables.

Fujitsu is starting modestly, with production of 3,500 heads of lettuce a day, but says that if all goes well, it intends to produce about $4 million worth by the 2016 fiscal year, up from a goal of $1.5 million this year.

Not everyone is convinced that high-tech agriculture is the way forward. Yukihiro Kato, a farmer in Yokohama who sells a range of produce in the local market, says demand for his vegetables, some of them grown organically, is rising.

Panasonic is trying to find the right mix between high-tech and traditional farming know-how. At its smart greenhouses, farmers prepare the soil and plant seeds the usual way. As the plants grow, sensors measure temperature and moisture levels. If it is too hot, Panasonic’s system automatically closes the curtains to block sunlight and opens windows to let a breeze in, and vice versa if it is too cold.

For Takayoshi Tanizawa, a 40-year-old Panasonic employee, the turning point in his career came three years ago when he switched from making massage chairs to growing spinach.

Adding to his delight, he found vegetables aren’t as persnickety as, say, people are when they try out a massage chair. “Massage chairs are difficult. One person may say it feels good while the other may say the complete opposite,” Mr. Tanizawa said. “Plants don’t complain. They’re so obedient and good.”