Following the catalysts of broken down US-sponsored peace-talks and the teenager deaths on both sides Hamas (admitting its responsibility for the first time) unleashed more than 240 rockets into Israel in the past four weeks (including 100 since yesterday), Israel has drawn the line. As Bloomberg reports, Israel struck more than 90 targets in the Hamas-controlled Gaza strip from air and sea and PM Netanyahu suggested the option of a ground incursion was on the table. This is heaviest barrage since November 2012 and is set to worsen as Defense minister Ya’alon warned, this “will not end in just a few days,” adding that Israel “is prepared to expand the campaign by every means at our disposal.” In preparation for escalation, Israel has called up 40,000 reservists today as news hits that Tel Aviv airport has been closed due to shelling as “Operation Protective Edge” expands.

More than 240 rockets have struck Israel in the past four weeks, including more than 100 since yesterday, the military said.

[Here the Iron Dome intercepts a barrage of rockets into Israel…]

Israel struck more than 90 targets in the Hamas-controlled Gaza Strip from air and sea and called up more reservists for a possible ground operation to quell a barrage of Palestinian rockets into its territory.

“There are continuous air strikes on our people, an open war on innocent civilians, women and children,” he said on Hamas’s Al-Aqsa television. “Israel wants to turn things around and hide the truth.”

Among the targets hit today were command centers, rocket launchers, training bases and at least four homes of Palestinian militants, according to an e-mailed statement from the army. The military has also been given approval to mobilize more reservists in case a ground incursion is ordered, spokesman Lieutenant-Colonel Peter Lerner said by phone.

Prime Minister Benjamin Netanyahu met with top security officials at military headquarters in Tel Aviv and directed them to conduct an extensive and lengthy offensive that includes the option of a ground incursion according to an official who spoke anonymously because he wasn’t authorized to comment on record. The campaign is Israel’s biggest in Gaza since November 2012 and follows weeks of rocket fire and retaliatory air strikes.

“We are preparing a campaign against Hamas that will not end in just a few days,” Defense Minister Moshe Ya’alon said in an e-mailed statement. “We will not tolerate rocket fire at Israeli communities and we are prepared to expand the campaign by every means at our disposal.”

Residents of Israeli communities within a 25-mile radius of Gaza have been instructed not to congregate in large groups, and kindergartens and summer camps in that area have been told to cancel sessions, Lerner said. 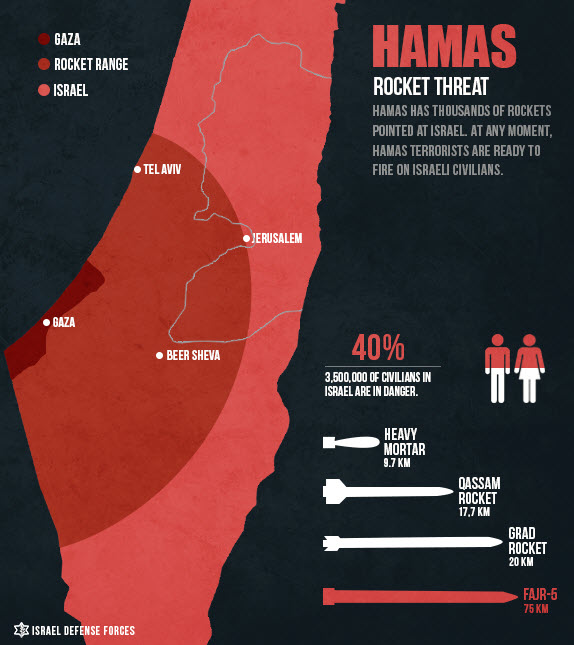 Still the US is shockingly quiet…

Abbas spokesman Nabi Abu Rudeina, in a statement posted by the official Palestinian news agency Wafa, said the president denounced the escalation. “The silence of the international community, especially the U.S. administration, will push the Palestinian leadership to make fateful decisions in defense of our people,” the statement cited Abbas as saying.

But there are concerns…

Some Israeli officials raised concerns about possible implications from the military campaign.

“Hamas is weaker than ever,” Israeli Finance Minister Yair Lapid said today on Army Radio. “Hamas is so weak that we also have to examine all the possible scenarios if Hamas collapses, and who will take over in the vacuum that will be created.”

But things are escalating fast…