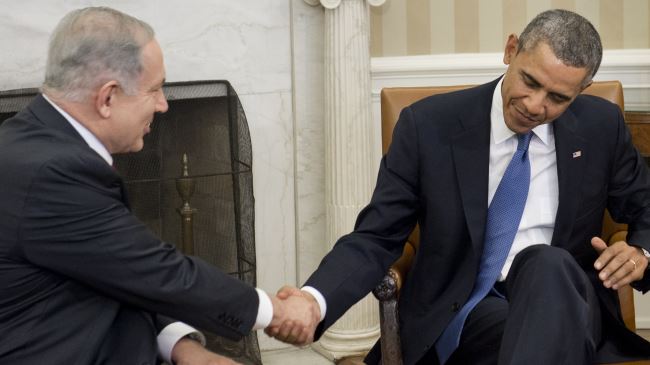 – US should declare independence from Middle East (PressTV, July 4, 2014):

Today is Independence Day in America.

Every July 4th, Americans grill hamburgers and set off fireworks in honor of the Founding Fathers’ war of independence against British monarch King George III.

With every passing day, more and more Americans want to break their chains and declare independence. But this time, instead of breaking free of Great Britain, they wish to declare their independence from the Middle East.

The US is trapped in a ruinous web of dependency with the Middle East. Since 2003 America has annihilated what was left of its economy pursuing Mideast wars that are not in its interest. Economist Joseph Stiglitz wrote in 2008 that the Iraq war had cost at least $3 trillion, and would likely exceed $5 trillion. Such sums represent multiples of the US gross domestic product (GDP). This enormous expenditure on pure folly is responsible for the immiseration that has afflicted the American people since Goldman Sachs pulled the plug on the global financial system on September 11th, 2008.

President Obama wants to tighten the noose of dependence by giving another $500 million to the so-called Syrian rebels. In reality, this money is unofficially earmarked for ISIL, the Takfiri terrorist group that is decimating Syria and Iraq. It seems that America is paying extremists to destroy the very countries we always claimed we were trying to save.

The US relationship with the Middle East is marked by features of what psychologists call codependency. Wikipedia explains:

“Codependency is defined as a psychological condition or a relationship in which a person is controlled or manipulated by another who is affected with a pathological condition (typically narcissism or drug addiction); and in broader terms, it refers to the dependence on the needs of, or control by, another. It also often involves placing a lower priority on one’s own needs, while being excessively preoccupied with the needs of others.”

The US and certain Middle Eastern countries are trapped in what might be called a mutually codependent relationship. On the one hand, the US is the narcissistic oil addict that insists on manipulating and controlling the Middle East. But from another perspective, key Middle Eastern nations Israel and Saudi Arabia are the narcissistic dollar addicts that insist on manipulating and controlling the US.

By constantly intervening in the Mideast to prop up the Israeli and Saudi regimes, the US is “excessively preoccupied with the needs of others” to the point of clinical insanity. The US has put such a low priority on its own needs that its roads, bridges, drinking water systems, mass transit systems, schools, and energy delivery systems are falling apart. Meanwhile it is shoveling endless trillions of dollars into the voracious black holes of Tel Aviv and Riyadh.

Fortunately, America’s codependent relationship with the Middle East may be ending. This doomed, twisted love affair began on Valentine’s Day – February 14, 1945, when U.S. President Franklin D. Roosevelt met with King Abdul Aziz of Saudi Arabia aboard the USS Quincy. It ought to end on the Fourth of July – today – with an official American declaration of independence from the Saudi oil sheikhs.

The US doesn’t need Saudi oil any more. As recently as 2006, the US was importing 13 billion barrels of oil per day. (Even then, Saudi Arabia provided less than 10% of the total.) Today, US oil imports have fallen below 5 billion barrels per day, and Saudi Arabia’s contribution is negligible. So why are we propping up the brutal, medieval Ibn Saud regime, which sponsors the too-extreme-for-al-Qaeda ISIL terrorists? If the US pulls the plug, the Saudi regime will collapse in five minutes or less. Such a move is long overdue.

The US should also declare its independence from Israel. So far Israel has cost the United States over two trillion dollars, not counting the war-for-Israel in Iraq. The US treasury literally hands Israel – a wealthy country – billions of dollars every year. Why? Because Israel and its supporters dominate the American media and the White House, and own Congress outright. In effect, the US has been colonized by Israel.

As this article goes to press, the USA officially supports the unity of Iraq, while Israel and Saudi Arabia are trying to smash that country into three separate states. So why is the US training ISIL terrorists in Jordan and throwing money and arms in their direction? Why won’t the US deliver the fighter planes purchased by Baghdad? It seems that American official policy is being undermined by so-called allies in Tel Aviv and Riyadh, who have their own agenda.

The US needs to cut loose from those alleged allies. Israel and Saudi Arabia represent the worst aspects of the past: a medieval despotism that sponsors terrorists and extremists on the one hand, and an apartheid ethnic-superiority state on the other. These two regimes belong in the proverbial dustbin of history.

Can Obama defeat the power of the Saudi petrodollar lobby and end America’s codependent relationship with Riyadh? Can he overcome the even greater power of the Israel lobby and terminate America’s sick enslavement to the monsters in Tel Aviv?

July 4th would be a good day to cut the ties that bind America to two of the worst governments in the region. Obama should immediately end all US aid to Saudi Arabia and Israel. He should also stop sending billions of dollars to the Zionist thug al-Sisi in Cairo, and let that vicious regime crumble to dust.

In short, America needs a new Declaration of Independence. It could begin with the immortal words: “When, in the course of human events, it becomes necessary for one people to dissolve the political bonds which have connected them with another…”

It has become necessary for the USA to dissolve the bonds connecting it to real Middle Eastern axis of evil – the rogue regimes in Israel and Saudi Arabia.