A leaked memo attributed to RAND corporation think tank suggests the Ukrainian govt should engage in an all-out war in the east, including shutting down all communications, putting citizens in internment camps and killing all who resist such actions.

In the shocking letter, which has been leaked to online media, the advice offers a step by step brutal guide in how to deal with the population in eastern Ukraine. The authenticity of the document which bears the RAND corporation logo, however, could not be independently verified.

The RAND Corporation is non-profit global think tank which offers research and analysis to the US armed forces.

In the first line the memorandum notes that the peace plan outlined by new president Poroshenko is likely to fail. However, it soothes, the political and material downsides of the operation will be “outweighed” by the gains.

The chilling letter then lists the advantages that a full scale military onslaught against the two breakaway eastern Ukrainian regions would have.

Instead of upholding the region’s coal supplies as a source of future employment, it says the decimation of the coal industry in the fighting would mean they would be quickly shut down, thereby relieving the Ukraine of burdensome subsidy costs.

Shutting down the Donbass industries would also mean a reduction in Russian gas consumption and the destruction of the local oligarch Rinat Akhmetov’s clan and his political and economic clout.

The shocking memorandum then lists a three stage military campaign to guarantee victory. Stage one, called the total isolation of the rebel regions, presuming that all civilians who have stayed behind are “complicit in the unrest or supportive of it.”

It proposes martial law should be imposed in the area with a strict curfew between 20:00 and 06:00, while all local authorities would have their competencies terminated and Constitution be suspended in the area.

The regions should then be encircled with troops with special attention being given to areas which border on Russia.

As regards the media it recommends that all broadcasting services, telephone and mobile communications and internet services in the region should be shut down and that the international media should be “subject to a special procedure.”

Stage 2: Internment camps for male adults, those who resist to be killed on the spot

Then begins Stage Two of the operation, called mop-up, which involves a gradual tightening of the circle of troops round the region, followed by airstrikes and then artillery and mortar assaults against the “enemy’s” strategic facilities.

Without any apparent regard for human life the RAND authors then advise that the use of non-conventional arms should not be ruled out “to ensure smaller casualties among our own personnel”.

The authors, who seemingly have little or no knowledge of the situation in eastern Ukraine, then say that settlements should be liberated one by one with armor going in first, followed by infantry who should shoot to kill anyone bearing arms.

In what appears to be advising ethnic cleansing, all male adults should be removed to internment camps, while anyone who attempts to resist should be executed; children under 13 and people over the age of 60 should be moved to specially equipped facilities in other areas.

In a bizarre piece of advice that appears at best unrealistic and at worst deranged RAND then says that anyone with bruises, scuff marks, traces of gun powder or gun oil on their clothes should be tried in court for separatism and terrorism. Any lucky residents who don’t fall into these categories would be allowed to return home after a period of two months “of internment” and would then be slapped under surveillance by the security services.

Stage 3: Property of convicted and displaced to be nationalized

Stage Three, which is risibly called ‘Back to Normal’, says that all refugees “from the warzone” should then be allowed to return home. This is presuming that in the first place they would have a home to return to and in the second place they would want to return home to a region now so divided along Ukrainian and Russian ethnicities.

However men aged 18-60 shall be “checked” in internment camps, while the property of convicted and displaced resident of Donetsk and Lugansk regions shall be nationalized.

The area of the punitive operation shall be made “off limits” to foreign media, the memorandum concludes. 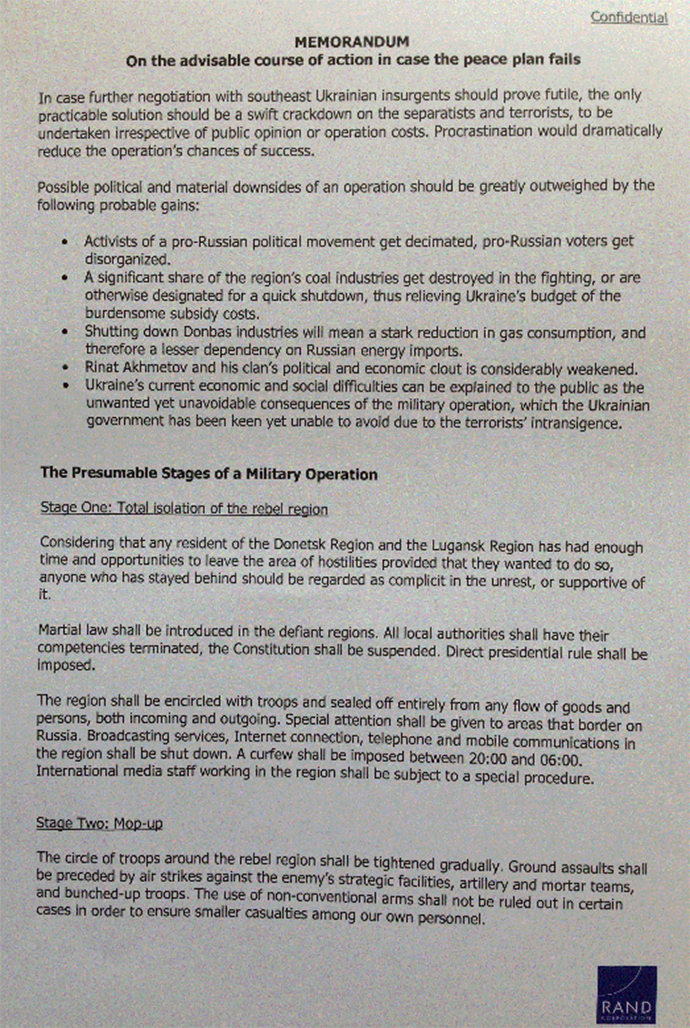 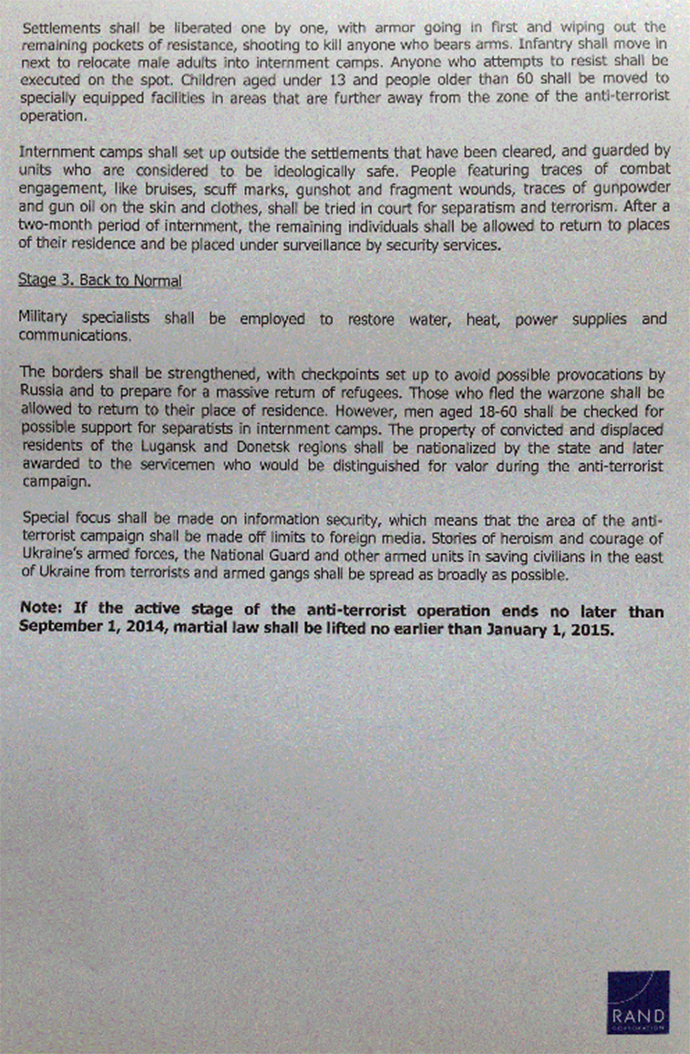