– ISIS Is Hiring Judges, Doctors And Engineers As Al-Qaeda Prepares For War Against Caliphate (ZeroHedge, July 2, 2014):

As we reported earlier, in what was perhaps the first official action by the jihadists with the glossy year end brochures, the newly crated ISIS Caliphate which stretches from Syria to Iraq (and which is not longer ISIS, just IS, or Islamic State) made a global call urging the Muslim proletariat to immigrate to the newly created territory in a clear example of what in the US would be called “porous” immigration policy. Judging the by the expansive proposed borders, the terrorist organization, which in the past has received occasional training and support by the US and with a penchant for cannibalism will have a while to wait before its removes all the slack from its incipient economy, more or less like the Fed. 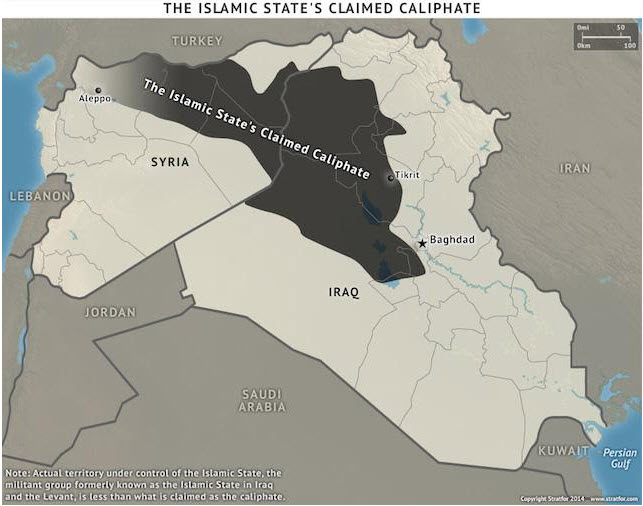 But perhaps more curious is that the leader of the self-proclaimed al-Qaeda spin off nation, Abu Bakr al-Baghdadi, in addition to a broad religious call to arms, so to speak, also beckoned workers with a specific skillset to present themselves for duty: namely those with military, medical and managerial skills were urged to flock to the newly-declared state in an audio recording released Tuesday.

As Al Arabiya reports, the newly named “caliph” said the appeal especially applied to “judges and those who have military and managerial and service skills, and doctors and engineers in all fields.”

It goes without saying that IS is also in need to fighters (not to mention suicide bombers, although compensation arrangements there could be problematic): Baghdadi also addressed the group’s fighters, saying that “your brothers in all the world are waiting” to be rescued by them.

“Terrify the enemies of Allah and seek death in the places where you expect to find it,” he said. “Your brothers, on every piece of this earth, are waiting for you to rescue them.”

Furthermore, since the caliphate is now wealthier than its ideological competitor Al Qaeda ever was, it just may be the case that Europe (and/or the US) may suddenly experience a major skilled worker brain drain as the best doctors, managers and engineers rush to get paid by terrorists, with the occasional virgin thrown in as a Christmas bonus.

Perhaps ironically, the biggest question now is not whether or not IS(IS) will continue its jihad against Baghdad and seek to branch out by, say, crossing the Atlantic – that much is guaranteed – but what happens with the abovementioned Al Qaeda itself, which will hardly stand idly by and watch as it is upstaged by its formerly smaller, and (formerly) far more irrelevant spin off.

According to AFP, the declaration of an Islamic caliphate in parts of Iraq and Syria is a direct challenge to Al-Qaeda and could set off a dangerous contest for the leadership of the global jihadist movement, experts say.

Paradoxically, it would be the west that suffers the most:

Desperate to retain its preeminent role, the movement behind September 11 may be driven to carry out fresh attacks on Western targets to prove it remains relevant.

“This competition between jihadists could be very dangerous,” said Shashank Joshi of the London-based Royal United Services Institute, warning that Al-Qaeda may look to make a “spectacular” show of force.

The Islamic State of Iraq and the Levant (ISIL) announced on Sunday it was establishing a caliphate in parts of Iraq and Syria where it has seized control. A form of government last seen under the Ottoman Empire, a caliphate has been a long-held dream of radical jihadists who want to impose their version of Islamic sharia law.

Renaming itself simply the Islamic State (IS), the group also daringly declared its chief Abu Bakr al-Baghdadi as caliph and “leader for Muslims everywhere”.

Here is where it gets interesting: Al-Qaeda can hardly ignore what is essentially a declaration of war from an upstart that has scored a string of successes, said Magnus Ranstorp, an expert on radical Islamic movements at the Swedish National Defence College.

“The competition has already started,” he said. “Al-Baghdadi already refused to pledge allegiance to (Al-Qaeda leader Ayman) al-Zawahiri and now he can say: ‘Look what we have accomplished… You are just somewhere, we don’t know where, talking on the Internet.'”

For a new, younger generation of radical Islamic militants, Al-Qaeda with its grey-bearded 63-year-old leader is no longer the draw it was under Osama bin Laden.

Believed to be holed up in the Afghanistan-Pakistan border region, Zawahiri in their eyes seems to have done little in recent years beyond issuing statements and videos.

Finally, in what could be the coup de grace in its recruitment efforts, the Islamic State is allowing its cannibal terrorists to use FaceBook and Twitter. In other words, the original Al Qaeda will have to blow up some really big and really symbolic buildings to regain its coolness factor from its much younger and much hipper Islamic State terrorist competition.

– ISIS IN BRITAIN! Up To 300 Returning ISIS Jihadi’s In UK & Ready To Attack (Video)