An odd thing has been happening in the last few months. Since the Chinese government began to crackdown on ‘junkets’ and ‘corruption’, Macau – the hub for Chinese billionaires to smuggle their money out of China – has seen revenues disappointing. So much in fact that, as Reuters reports, gambling revenue in Macau fell 3.7% in June on an annual basis, the first decline in more than four years. It could be coincidence, however, that as Macau has seen growth collapse, Las Vegas has seen Baccarat (the preferred game of China’s rich) surge. In May, as Macau growth slumped, Las Vegas Baccarat surged over 85%. While slots (the staple indicator of the 99% in America) continues to decline (-4.4% in May), it seems rich foreigners are finding creative new ways to wash their money out of China.

“You don’t actually buy anything,” said Lai, standing near a half-empty display case containing a messy spread of watches and jewellery. “We just help people get money out of China so they can gamble more.”

But as Reuters reports,

Gambling revenue in Macau fell 3.7 percent in June on an annual basis, the first decline in more than four years…

The southern Chinese territory of Macau, a special administrative region, like neighbouring Hong Kong, is the only place in the country casino gambling is legal.

Gambling revenue from Macau’s 35 casinos fell to 27.2 billion patacas in June ($3.4 billion) from 28.3 billion patacas a year earlier according to data released by the Macau government on Tuesday.

And coincidence or not, at the same time, Las Vegas sees a massive spike in Baccarat business (the preferred game of China’s wealthy)… 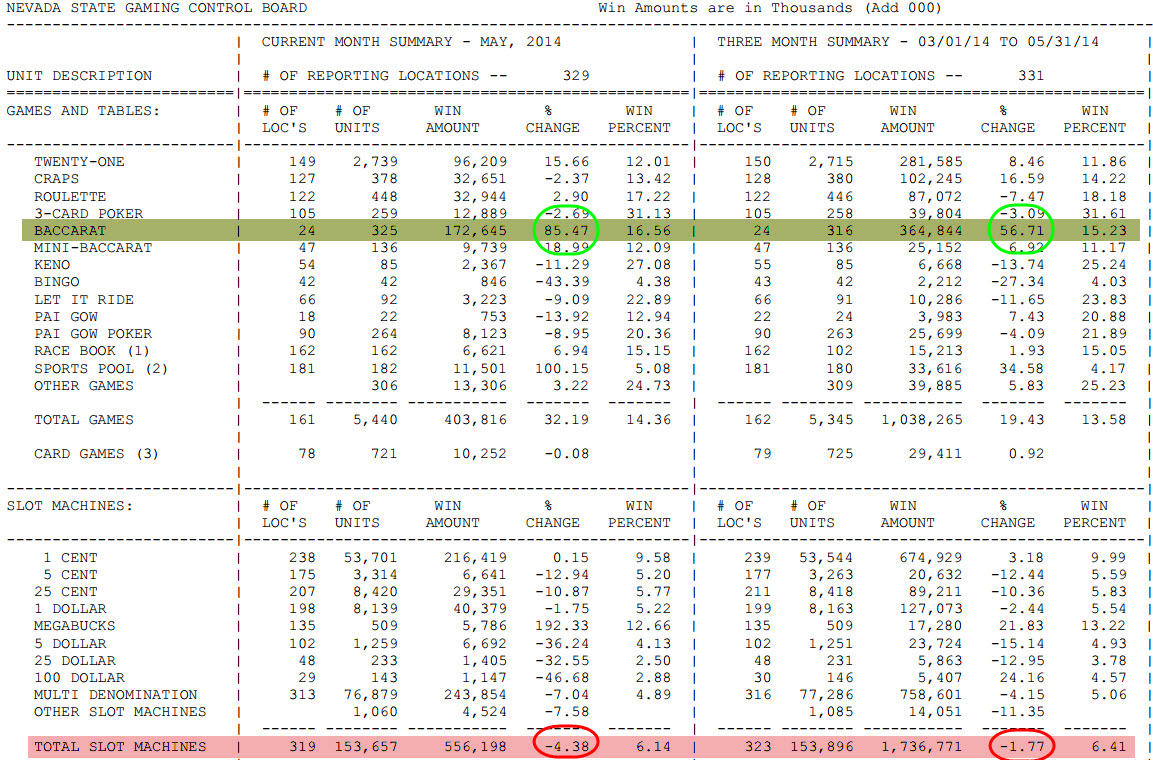 Of course – correlation is not causation – but we can’t help but wonder if the Chinese have found a new way to get their cash out of China.

*  *  *
On a separate note, a glance at the table above also shows the tumble in slots revenue (the staple of joe sixapck and 99%) – not exactly reflective of the animal spirits associated with all-time high stock markets.