– This Has Never Happened Without The US Falling Into Recession (ZeroHedge, June 26, 2014):

With all eyes firmly focused on yesterday’s disastrous GDP report (and ultimately dismissing it as ‘weather’ and one-off exogenous factors), we thought Bloomberg Brief’s Rich Yamarone’s analysis of a lesser-known (yet just as key) indicator of the state of US economic health was intriguing. As he notes, according to the latest data from the Bureau of Economic analysis, there has never been a time in history that year-over-year gross domestic income has been at its current pace (2.6 percent) without the U.S. economy ultimately falling into recession. That’s more than 50 years of history, which is about as good as one could ever hope for in an economic indicator. 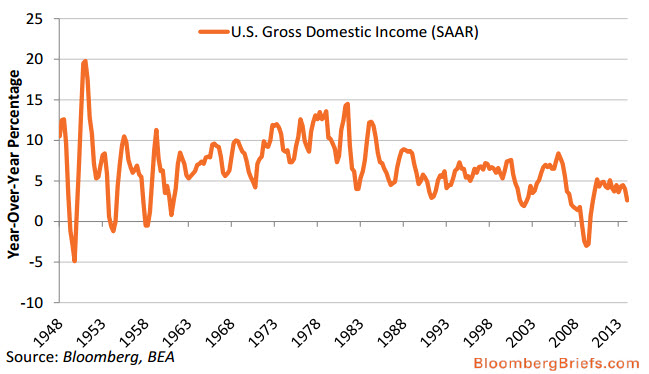