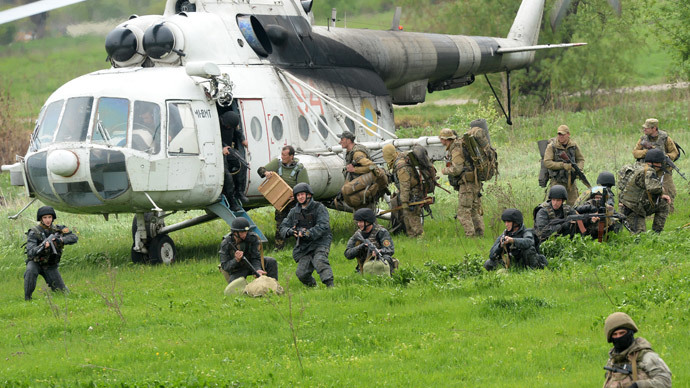 Nine people are feared dead after self-defense forces in the Donetsk region shot down a Ukrainian army helicopter, which was used for transporting military cargo, a Kiev spokesman said.The Mi-8 helicopter was downed “at about 5 pm local time at Karachun Mountain near Slavyansk by a rocket fired from a portable air defense system,” eastern Ukraine military operation spokesman, Vladislav Seleznyov, wrote on his Facebook page.

“There were nine people aboard the helicopter. According to preliminary information, all those aboard died in the crash,” he said, adding that the helicopter was returning to a Ukrainian checkpoint after a cargo delivery mission.

The self-defense troops, who fired the missile, escaped to the nearby village of Bylbasovka, Seleznyov wrote.

The Ukraine’s National Guard fighters told the Ukrainskaya Pravda newspaper that the Mi-8 helicopter was downed during takeoff from Karachun Mountain (a strategic high point near Slavyansk where the Ukrainian army’s artillery is deployed).

In a rather stunning step for the West’s propaganda machine, ‘devil-incarnate’ Putin has asked the Russian parliament to revoke the right of military intervention in Ukraine. As The BBC reports, Vladimir Putin’s move was aimed at “normalising the situation” in the conflict-torn eastern regions of Ukraine, his press-secretary said. Ukraine added that this move was a “first practical step” towards settling the crisis in the east. Presidential spokesman Peskov said the move was linked to Monday’s launch of talks between Kiev and separatist leaders in the east (with the case-fire deadline ending Friday). One can only wonder, why now? for Putin’s gesture of peace? Cold showers enough in Kiev? Or is it that oil prices are high enough to help thanks to the Iraq situation and his Syrian ‘aid’ is needed as Ukraine festers?

Russia’s president has asked parliament to revoke the right of military intervention in Ukraine, where rebels have been fighting government troops.

Vladimir Putin’s move was aimed at “normalising the situation” in the conflict-torn eastern regions of Ukraine, his press-secretary said.

The parliament authorised Mr Putin to use force in Ukraine on 1 March.

Ukraine said Mr Putin’s latest move was a “first practical step” towards settling the crisis in the east.

In a statement, Ukrainian President Petro Poroshenko stressed that this came after Mr Putin had officially supported Kiev’s peace plan, which involved a ceasefire.

On Tuesday, presidential spokesman Dmitry Peskov said Mr Putin had sent a letter to the upper house of parliament, the Federation Council, asking to revoke the right of military intervention in Ukraine.

Mr Peskov said the move was linked to Monday’s launch of talks between Kiev and separatist leaders in the east.

So we have until Friday (when the cease-fire ends) to see whether this lifting of military force will stay and to figure out Putin’s sudden ‘Mr. Nice Guy’ game plan. This may be problematic considering moments ago this happened:

A Ukrainian helicopter used for carrying military cargo was brought down by rebel fire near the town of Slaviansk in eastern Ukraine on Tuesday and nine people were feared dead, a government forces spokesman said.

Asked about reports that a helicopter had been shot down, the spokesman, Vladyslav Seleznyov, said: “Yes. It was brought down”.

Asked about dead, he replied: “There was a three-man crew, in all nine people (on board).”

Dmytro Tymchuk, a military analyst known to have good sources in the armed forces, said the helicopter had been brought down by a missile fired from a shoulder-held launcher.

He confirmed 9 people had been killed, according to preliminary information.

One can’t help but wonder at the timing and theater of it all… Who stands to benefit from ending the cease-fire in such a gratuitous manner?