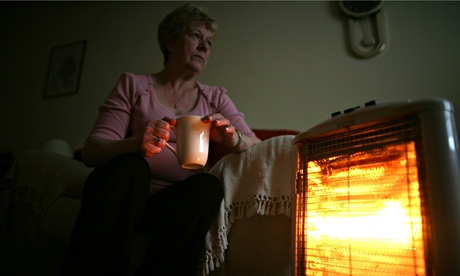 – Poverty In The UK Doubles Over the Past 30 Years, Despite Robust “Economic Growth” (Liberty Blitzkrieg, June 19, 2014):

One of my favorite lines about the current oligarch theft continuing to occur throughout the world is courtesy of the “Artist Taxi Driver,” who likes to state:

“This is not a recession its a robbery.”

Truer words were never said, but this theft goes back a lot further than the latest economic catastrophe. As we all know by now, real median wages haven’t increased in the U.S. for the past 45 years, while at the same time, so-called economic growth according to traditional metrics has exploded higher. As yesterday’s article from the Guardian below demonstrates, this is not just an American problem. It is pervasive throughout the Western world.

So what happened? I think it’s best to put things in terms of Middle Age feudalism, since the majority of the Western world has indeed entered a modern type neo-serfdom. Essentially, think about this in terms of a king in 1085 who just doubled the land under his control. At the same time, his serfs are likely still tilling the same plots, and in order to consolidate his holdings, the king might demand increased tribute from his peasants. So the economy of the kingdom has doubled, but the serf is worse off than before. This is more or less what has happened to the West over the past several decades.

So what has allowed this tragedy to happen in modern times. My answer is clear: Financialization. It’s no coincidence that median real wages stopped increasing at the exact same time as Richard Nixon defaulted on the gold standard in 1971. This is not to say I think the “gold standard” is the answer. I don’t. Yet, it is important to understand that rampant fiat money manipulation by the Fed and its owners on Wall Street is at the very core of everything that has gone wrong.

Now, from the Guardian:

The number of British households falling below minimum living standards has more than doubled in the past 30 years, despite the size of the economy increasing twofold, a study on poverty and deprivation in the UK claims .

According to the study, 33% of households endure below-par living standards – defined as going without three or more “basic necessities of life”, such as being able to adequately feed and clothe themselves and their children, and to heat and insure their homes. In the early 1980s, the comparable figure was 14%.

The research, billed as the most detailed study ever of poverty in the UK, claims that almost 18 million Britons live in inadequate housing conditions and that 12 million are too poor to take part in all the basic social activities – such as entertaining friends or attending all the family occasions they would wish to. It suggests that one in three people cannot afford to heat their homes properly, while 4 million adults and children are not able to eat healthily.

Their findings will be seized on by opponents of the coalition, who argue that good news about the economy does not mean living standards are improving for most people. This will be a key Labour message in the run-up to next year’s election.

Oh right, the Labour Party. The folks who brought you war criminal, banker puppet and man-child Tony Blair. Why no mention of the UKIP I wonder…

Other figures being published include the claims that 5.5 million adults go without essential clothing; that 2.5 million children live in damp homes; that 1.5 million children live in households that cannot afford to heat them; that one in four adults have incomes below what they themselves consider is needed to avoid poverty, and that more than one in five adults have to borrow to pay for day-to-day needs.

Led by the University of Bristol and funded by the Economic and Social Research Council, the PSE project’s research will be presented to the conference and published in full this week. Gordon said he had been shocked by some of the findings. “In the early 1980s we assumed life was going to get better. For many it has, for many it hasn’t.”

2 thoughts on “Number Of British Households Falling Below Minimum Living Standards Doubles Over Past 30 Years, Despite ‘Economy Increasing Twofold’”