– This Is Not Going As Planned: Iraq Prime Minister Defies US, Accuses Saudi Arabia Of “Genocide” (ZeroHedge, June 17, 2014):

Shortly after the US revealed that, in addition to aircraft carriers and amphibious assault ships it was also sending a few hundred “special forces” on the ground in Iraq, contrary to what Obama had stated previously, Washington made quite clear it wants Prime Minister Nuri al-Maliki to embrace Sunni politicians as a condition of U.S. support to fight a lightning advance by forces from the Islamic State of Iraq and the Levant. Then something unexpected happened: Iraq’s Shi’ite rulers defied Western calls on Tuesday to reach out to Sunnis to defuse the uprising in the north of the country, declaring a boycott of Iraq’s main Sunni political bloc and accusing Sunni power Saudi Arabia of promoting “genocide.”

In fact, as Reuters reported moments ago, the Shi’ite prime minister has moved in the opposite direction of Obama’s demands, announcing a crackdown on politicians and officers he considers “traitors” and lashing out at neighbouring Sunni countries for stoking militancy.

Not only did Iraq defy the US, but it also called out America’s BFF (or at least formerly so until the arrival of Iran, which the US is aggressively, and inexplicably, rushing to make its new key partner in the region) for being the real aggressor behind the scenes? How dare Maliki point out the truth – doesn’t he know that those US troops in Iraq can just as easily be used to depose the current regime as “fight” the Al Qaeda Jihadists the US itself armed in the first place?

Apparently not, and instead of seeking a broad coalition with Sunnis as the US ordered, the latest target of his government’s fury was Saudi Arabia, the main Sunni power in the Gulf, which funds Sunni militants in neighbouring Syria but denies it is behind ISIL.

“We hold them responsible for supporting these groups financially and morally, and for the outcome of that – which includes crimes that may qualify as genocide: the spilling of Iraqi blood, the destruction of Iraqi state institutions and historic and religious sites,” the Iraqi government said of Riyadh in a statement.

As Reuters notes, Maliki has blamed Saudi Arabia for supporting militants in the past, but the severe language was unprecedented.

And just to show it won’t take being exposed for the whole world to see sitting down, on Monday Riyadh blamed sectarianism in Baghdad for fueling the violence.

The rest of the story is largely known: Iraq is slowly sinking into sectarian violence which is exposing age-old rifts, and even forcing leaders to speak out of place, in the process revealing very undiplomatic truths:

ISIL fighters who aim to build a Caliphate based on mediaeval Sunni precepts across the Iraqi-Syrian frontier launched their revolt by seizing the north’s main city, Mosul, last week and swept through the Tigris valley towards Baghdad. The fighters, who consider all Shi’ites to be heretics deserving death, pride themselves on their brutality and have boasted of massacring hundreds of troops who surrendered.

Most Iraqi Sunnis abhor such violence, but nevertheless the ISIL-led uprising has been joined by other Sunni factions, including former members of ousted dictator Saddam Hussein’s Baath Party and tribal figures, who share widespread anger at perceived oppression by Maliki’s government.

Western countries, including the United States, have urged Maliki to reach out to Sunnis to rebuild national unity as the only way of preventing the disintegration of Iraq.

“There is a real risk of further sectarian violence on a massive scale, within Iraq and beyond its borders,” U.N. Secretary-General Ban Ki-moon said on Tuesday. “I have been urging Iraqi government leaders including Prime Minister al-Maliki to reach out for an inclusive dialogue and solution of this issue.”

But the long-serving prime minister, who won an election two months ago, seems instead to be relying more heavily than ever on his own sect, who form the majority in Iraq. Hassan Suneid, a close Maliki ally, said on Tuesday the governing Shi’ite National Alliance should boycott all work with the largest Sunni political bloc, Mutahidoon.

In the meantime, until the solution to Iraq violence is found, alliances in the mid-east are changing at a ferocious pace and pitting such one time enemies as Saudi Arabia and Iran (not to mention the US) on the same side, forced to fight an extremist Jihadist movement that the US itself was funding. “Iran, the leading Shi’ite power, has close ties to Maliki and the Shi’ite parties that have held power in Baghdad since U.S. forces toppled Saddam Hussein in 2003. But although both Washington and Tehran are close allies of Baghdad, they have not cooperated in the past.”

Domestically, the chaos is just as bad, if not worse:

Tens of thousands of Shi’ites have rallied at volunteer centres in recent days, answering a call by the top Shi’ite cleric to defend the nation. Many recruits have gone off to train at Iraqi military bases.

But with the million-strong regular army abandoning ground despite being armed and trained by the United States at a cost of $25 billion, the government is increasingly relying on extra-legal Shi’ite militia to fight on its behalf, re-establishing groups that fought during the 2006-2007 bloodletting.

According to one Shi’ite Islamist working in the government, well-trained fighters from the Shi’ite organisations Asaib Ahl Haq, Khetaeb Hezbollah and the Badr Organisation are now being deployed as the main combat force, while new civilian volunteers will be used to hold ground after it is taken.

The Sunni militants have moved at lightning speed since seizing Mosul last Tuesday, slicing through northern and central Iraq, capturing the towns of Hawija and Tikrit in the north before facing resistance in southern Salahuddin province, where there is a large Shi’ite population.

The battle lines are now formalising, with the insurgents held at bay about an hour’s drive north of Baghdad and just on the capital’s outskirts to the west.

Meanwhile to the north, as we reported previously, the town of Kirkuk has been taken by forces from the autonomous Kurdish region. In a further sign of ethnic and sectarian polarisation, Maliki allies have accused the Kurds of colluding with Sunnis to dislodge government forces in the north.

That, however, is hardly the case, at least for now. As Fox reports, ISIS is so far mostly bent on taking their march south toward Baghdad, and not into the autonomous zone of Kurdistan, where hardened fighters are prepared to defend their oil-rich turf. This northern front is one of the few places where ISIS have encountered resistance — for unlike the Iraqi Army, the cohesive Kurdish force has held them back.

The Kurds, of course, were lucky to seize the long-disputed oil rich lands in the north – they did so with the help of ISIS whose arrival promptly scattered the Iraq army.

Whatever the reason, the army here fled —  and into the vacuum came the Peshmerga — the Kurdish Army that has for decades been fighting for freedom in this mountainous land, and who are now taking advantage of the chaos below them.

Today on the front lines in Kirkuk, Kurdish forces were digging in, excavating trenches and building defenses. This is becoming a permanent boundary.

As to the question of whether these impressive Peshmerga troops might help reclaim Mosul, Nechervan Idris Barzani, the prime minister of Iraqi Kurdistan, was clear. Until a political solution is embarked upon, they will not help. To do so would be foolish without the support of other Sunni tribes in the area.

Perhaps the best summary of all the unfolding confusion comes from the following just released update chart from the Institute for the Study of War. 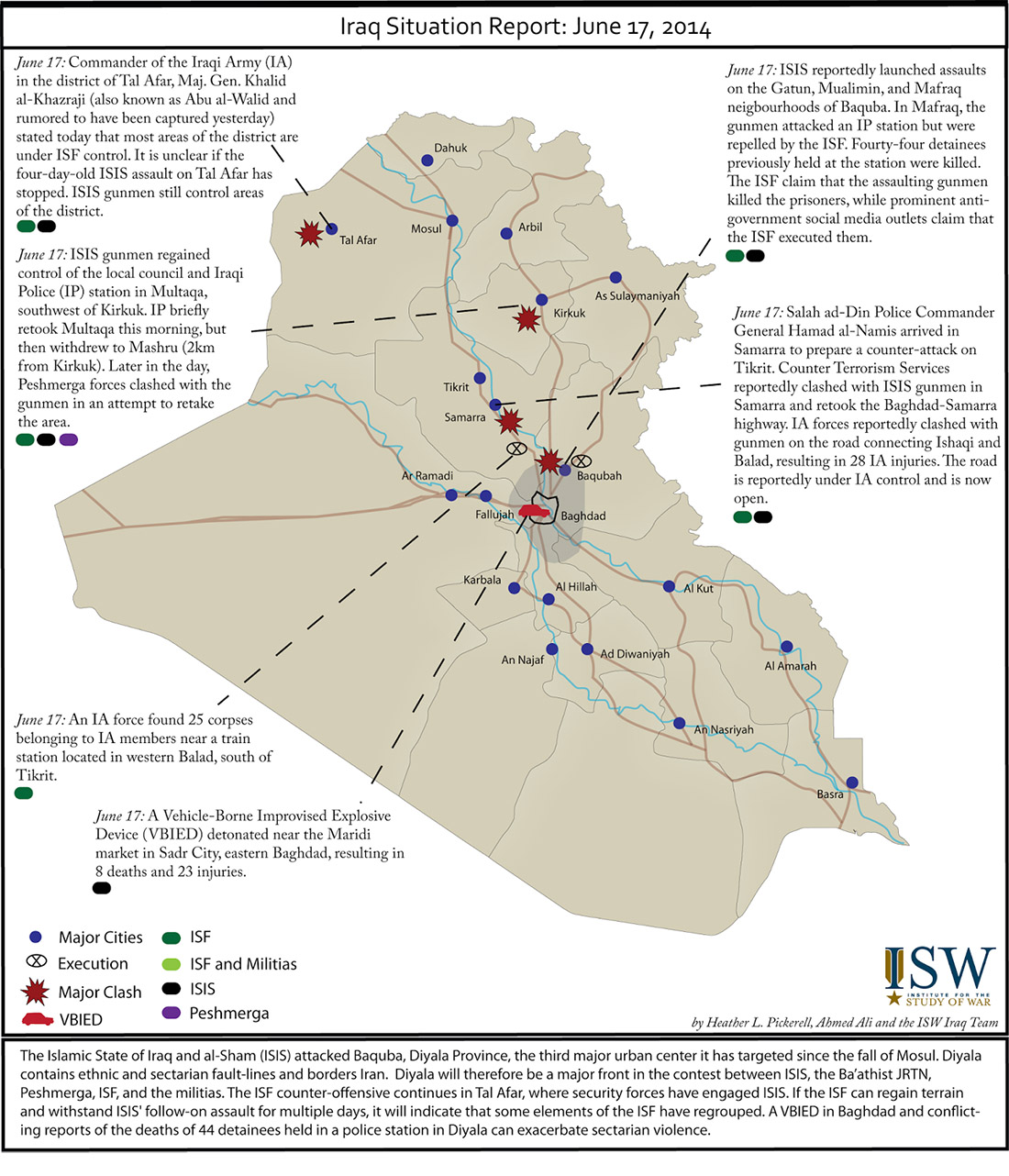 But where it would get most messy – literally – is if as the previously reported shuttering of Iraq’s largest refinery leads to electricity blackouts for Baghdad. Because nothing gets people in a murderous rage quite as 115 degrees and no air conditioning. 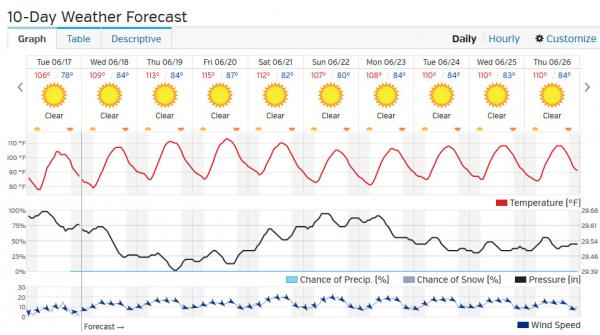