Yesterday, when we presented the latest US naval update, focusing on the distribution of US aircraft carriers around the world and particularly in the middle east, we summarized that “America, which historically has had a far greater naval presence in the middle east, is quite unprepared for the recent dramatic resurgence of Al Qaeda splinter groups. Expect at least one more aircraft carrier to depart in direction Iraq shortly.” 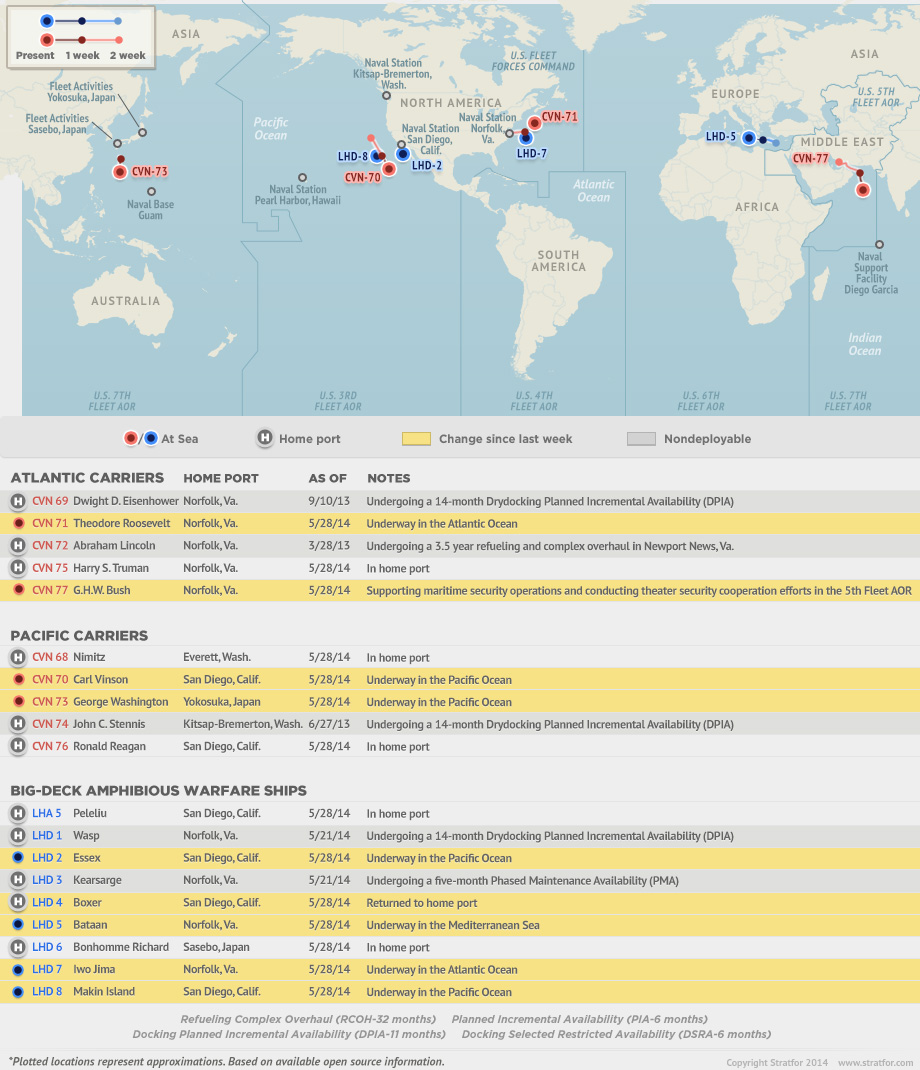 Turns out “shortly” meant less than one day. Per IBT:

Iraq is in turmoil after an al Qaeda offshoot, the Islamic State of Iraq and Syria, made advances this week in the north and north-central portions of the country, including the seizure of Mosul, Iraq’s second-largest city.

On Thursday, Obama said he was mulling all options on Iraq, saying, “I don’t rule anything out.” His spokesman, Jay Carney, later clarified, saying the president is not considering putting troops on the ground.

Here is “George H.W. Bush”, aka CVN-77 – note, this is not the president who just celebrated his 90th birthday by jumping out of a plane. 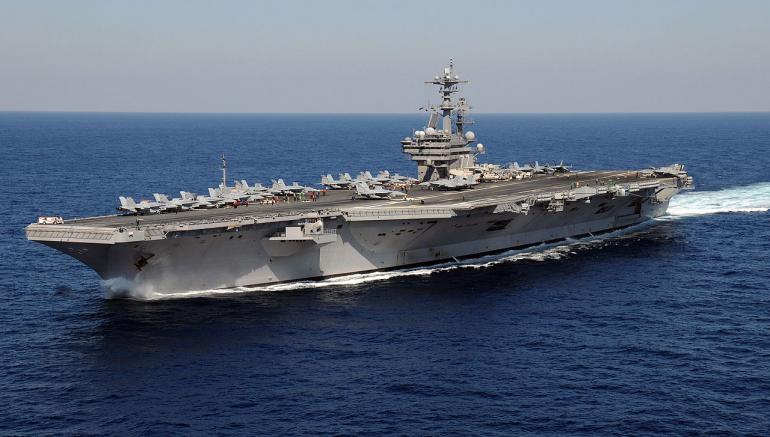 It won’t be enough: we expect at least CVN-71 Teddy Roosevelt to start making its way toward Iraq in the next few days.

Why is the US scrambling to dispatch aircraft carriers toward Iraq? Because as the Daily Beast reports, if Obama changes his mind, U.S. jets could be flying over Iraq in less than a day.

U.S. air bases, housing dozens of American fighters and bombers, are well within striking distance of Iraq. High-flying spy drones like the Global Hawk can just as easily fly over Iraq as Afghanistan or any other conflict zone in the region. The aircraft carrier U.S.S. George H.W. Bush is a few days’ sail away, in the North Arabian Sea. And it boasts dozens more fighters on board.

That’s why a number of retired high-ranking U.S. Air Force officers, including Lt. Gen. David Deptula, who served as the Air Force’s first deputy chief of staff for intelligence, say any strikes, if ordered, could begin almost immediately.

“If you can provide me with the appropriate intelligence we can start doing (air strikes) within 24 hours,” he told The Daily Beast. “There are a variety of means do this, whether you are talking about long-range, high-payload aircraft or smaller aircraft. With the requisite intelligence information you can start again in 24 hours.”

“No question we could strike anytime,” added a second senior retired Air Force officer, who asked not to be quoted by name. He saw no “tech or logistical” reasons why air assets couldn’t be diverted from Afghanistan to Iraq.

Deptula said—but would not specify—that the Air Force was capable of launching air strikes into Iraq from bases it uses in neighboring countries. Those bases include an airbase in Incirlik, Turkey, the hub of U.S. air operations in the 1990s that patrolled the air space of northern Iraq. After U.S. troops left Iraq in 2011, many of the drones, sensors and other surveillance and reconnaissance aircraft used in Iraqi bases were transferred to Incirlik.

Another air base that could be used for these operations is Al-Udeid, west of Doha, Qatar. Al-Udeid served as the center for the air campaigns during the height of the Iraq and Afghan wars. The base is still used for some of air missions over Afghanistan and houses B1-bombers, a long range aircraft that can deliver up to 48,000 pounds of bombs in a single sortie.

So yes, if the US wanted to launch a destructive assault against the extremist branch of Al Qaeda, it could, and probably would wipe out the bulk of its armed force in short notice.

However, that assumes the US actually wanted to wipe out ISIS/ISIL: after all it has been arming this particular group of jihadists operating in Syria for a long time, which begs the question: just what is ISIS’ carefully cultivated (by the CIA and US State Department) strategic long-term role when it comes to Iraq in particular and the middle east in general.

2 thoughts on “Irony: George H. W. Bush Is Heading Toward Iraq … The Aircraft Carrier, That Is”