– McDonalds Has Longest Stretch Without Rising US Sales In History (ZeroHedge, June 9, 2014):

Back in April when McDonalds reported its fifth consecutive decline in US comp store sales, the longest in decades, maybe ever, the excuses came fast and furious: ‘The U.S. has been difficult for them,” Jack Russo, an analyst at Edward Jones & Co. in St. Louis, said in an interview. “The weather has played a role, and I think the competition is a little bit sharper. We’ve seen better results out of Burger King and Wendy’s.” “Harsh winter weather and “challenging industry dynamics” weighed on U.S. results, McDonald’s added. So only MCD was impacted by weather, not the comps? Mmmk. But more importantly, there was hope so one could just ignore the present and past:“The month of April is going to be slightly improved so there are some positives out there” according to Russo.

Then April came and went, and the much awaited rebounds failed to materialize as McDonalds US sales posted an unchanged month. Perhaps it was the weather’s fault too?

However, what McDonalds will have a tough time explaining is why after almost hitting ‘escape velocity’ and nearly posting positive annual comps in the US, McDonalds just reported that May US comps once again dipped, declining by 1.0%, on expectations of a tiny 0.1% increase, thus cementing the longest period in our records database, a total of 7 months, in which McDonalds has gone without posting a single month of increasing US sales! We can’t wait for the company to blame the blamy balmy, spring weather as the reason why nobody could afford a 99 cent meal. 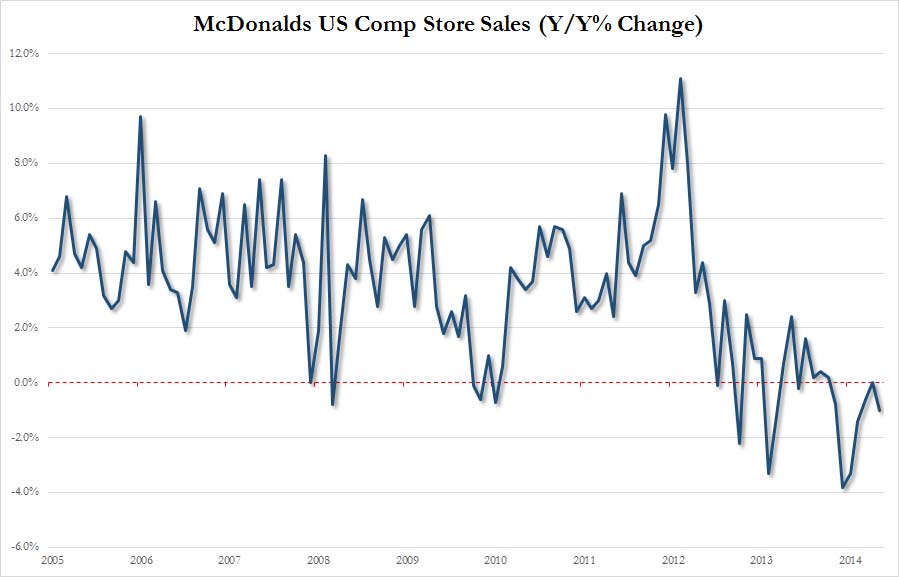