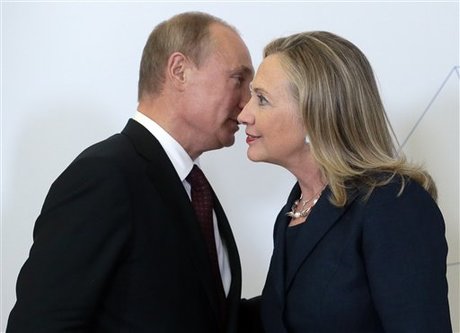 Earlier today, Russia’s Vladimir Putin, absent from the latest G-7 soiree (where he is so sorely missed everyone spoke about him), made waves of his own during an interview which was taken on June 3 in Sochi with anchors from Radio Europe 1 and the TF1 TV channel. It was, in a word, hilariously accurate, concise and without the usual prevarications and lies we are so used to when listening to US politicians. Here are some of the excerpts:

QUESTION (via interpreter): Mr President, it is very convenient that you are meeting with Mr Obama on June 6. Perhaps, it would be worse if you were meeting with Hillary Clinton. Only a few days ago, she said that what Russia is doing in Eastern Europe resembles what Hitler was doing in the 1930s.

VLADIMIR PUTIN:It’s better not to argue with women. But Ms Clinton has never been too graceful in her statements. Still, we always met afterwards and had cordial conversations at various international events. I think even in this case we could reach an agreement. When people push boundaries too far, it’s not because they are strong but because they are weak. But maybe weakness is not the worst quality for a woman.

Lucky for him, he has that option. Some more on Hillary and US bases around the globe:

QUESTION (via interpreter): Women must be respected, of course, and I’m sure you respect them. Do you think she went too far? There is a lot of mockery and cartoons in the media – including those showing you. What was your first reaction? Were you angry? Did you want to get back at her or laugh? We have never seen you laugh.

VLADIMIR PUTIN: Someday I will indulge myself and we will laugh together at some good joke. But when I hear such extreme statements, to me it only means that they don’t have any valid arguments. Speaking of US policy, it’s clear that the United States is pursuing the most aggressive and toughest policy to defend their own interests – at least, this is how the American leaders see it – and they do it persistently.

There are basically no Russian troops abroad while US troops are everywhere. There are US military bases everywhere around the world and they are always involved in the fates of other countries even though they are thousands of kilometres away from US borders. So it is ironic that our US partners accuse us of breaching some of these rules.

On his presence at the D-Day Anniversary Commemoration:

QUESTION: On Thursday evening you will meet with President Francois Hollande in the Elysee Palace, and the next day you will attend the D-Day 70th Anniversary Commemoration. This will be your first trip to the beaches of Normandy, and you will be the first Russian President to attend the ceremony. What do you as a Russian citizen think about being invited to this exceptional ceremony?

VLADIMIR PUTIN: This will be an important event for Europe and the rest of the world. We will pay tribute to those who prevented Nazism from enslaving Europe, and I believe that Russia’s attendance is a momentous event. The thing is that Russia and the anti-Hitler coalition countries, including France, were allies in that struggle for freedom, and my country played a vital and maybe even the decisive role in defeating Nazism. But we’ll never forget the French Resistance fighters and the French soldiers who fought side by side with us on the Soviet-German front, which is also called the Eastern front. I believe that this should not only remind us about our history, but also help to promote our relations now and in the future.

QUESTION: [A]re you saying that we are on the verge of another Cold War?

VLADIMIR PUTIN: I hope we are not on the verge of any war. Second, I insist that people – wherever they live – have their rights and they must be able to fight for them. That’s the point.

QUESTION: Is there any risk of a war? Now, as we see tanks on their way from Kiev, many people in France are asking this question. Were you tempted to send troops to eastern Ukraine?

VLADIMIR PUTIN: This is an interview, which implies short questions and short answers. But if you have patience and give me a minute, I will tell you how we see it. Here’s our position. What actually happened there? There was a conflict and that conflict arose because the former Ukrainian president refused to sign an association agreement with the EU. Russia had a certain stance on this issue. We believed it was indeed unreasonable to sign that agreement because it would have a grave impact on the economy, including the Russian economy. We have 390 economic agreements with Ukraine and Ukraine is a member of the free trade zone within the CIS. And we wouldn’t be able to continue this economic relationship with Ukraine as a member of the free trade zone. We discussed this with our European partners. Instead of continuing the debates by legitimate and diplomatic means, our European friends and our friends from the United States supported the anti-constitutional armed coup. This is what happened. We did not cause this crisis to happen. We were against this course of events…

On what constitutes “proof”:

QUESTION: But, Mr President, the United States and the White House claim they have evidence that Russia intervened in the conflict, sent its troops and supplied weapons. They claim they have proof. Do you believe that?

VLADIMIR PUTIN: Proof? Why don’t they show it? The entire world remembers the US Secretary of State demonstrating the evidence of Iraq’s weapons of mass destruction, waving around some test tube with washing powder in the UN Security Council. Eventually, the US troops invaded Iraq, Saddam Hussein was hanged and later it turned out there had never been any weapons of mass destruction in Iraq. You know, it’s one thing to say things and another to actually have evidence. I will tell you again:  no Russian troops…

QUESTION (via interpreter): Are you saying the US is lying?

VLADIMIR PUTIN: There are no armed forces, no Russian ‘instructors’ in southeastern Ukraine. And there never were any.

QUESTION (via interpreter): Do you recognise Ukraine’s sovereignty and its neutral stance with respect to relations between Russia and the West?

VLADIMIR PUTIN: Yes, we recognise its sovereignty. Moreover, we’d like Ukraine to act as a sovereign state. Joining any military bloc or any other rigid integration alliance amounts to a partial loss of sovereignty. But if a country opts for this and wants to cede part of its sovereignty, it’s free to do so. Regarding Ukraine and military blocs, this is what worries us, because if Ukraine joins, say, NATO, NATO’s infrastructure will move directly towards the Russian border, which cannot leave us indifferent.

On Russia’s plans about the French-built ampnigious assault ship:

QUESTION (via interpreter): You are talking about trust-based relations – both in defence and the economy. You have paid over a billion euros for two Mistral-class amphibious assault ships, and Russian naval officials are to visit Saint-Nazaire in a few days. Have you given them special permission to go to France?

VLADIMIR PUTIN: I believe we are living in a civilised world and we will all continue to fulfil our obligations and contractual commitments. I’ve heard a lot of talk about these ships going to Russia and some people believe that Russia shouldn’t get them. You know, here in Russia we had a lot of opposition to this contract. France is entitled to decide against selling the ships, but in that case we should get out money back. This would mean that out countries won’t have an opportunity to develop ties in the defence sector – but overall we are ready to expand our cooperation and even to place new orders, if our French partners are interested.

QUESTION (via interpreter): Don’t you think the United States is trying to surround Russia, to make you weaker as a leader and perhaps isolate you from the world? You are being very diplomatic now but you know the facts.

VLADIMIR PUTIN: Facts? You’ve said it yourself: Russia is the biggest country in the world. It would be very difficult to surround it, and the world is changing so fast that it would basically be impossible, even in theory.

Of course, we can see attempts by the United States to pressure their allies by employing their obvious leadership in the Western community, in order to influence Russia’s policy.

Russia’s policy is based solely on its national interests. Of course, we take the opinions of our partners into account but we are guided by the interests of the Russian people.

And so on. There is much more in the full interview linked here.

18 thoughts on “Putin On Hillary: ‘It’s Better Not To Argue With Women’”