Western media alarmism has spiked this month after NASA ‘revealed’ that a large section of the Antarctic shell was breaking off and will soon make sea levels rise to cover us all. The year of mid-term elections seems to be the year of hyped politics as NASA and the U.S. government continues to spread the lies about man-made global warming.

In the most recent example of how out of proportion statements help scare people, NASA used cherry-picked data and speculation to say that a ‘gigantic’ piece of West Antarctica  is now melting and falling into the sea. NASA did not mention anything about the state of the whole Antarctic & South Hemisphere, mainly because it does not fit the narrative and scare tactics of the climate change alarmists. One entity that has gone the extra mile to explain the reality of ice caps in the Antarctica was the most-respected National Snow and Ice Data Center.

In the graph below, the organization shows that, at least for the last 35 years, ice has been accumulating, not melting in the Southern Hemisphere. 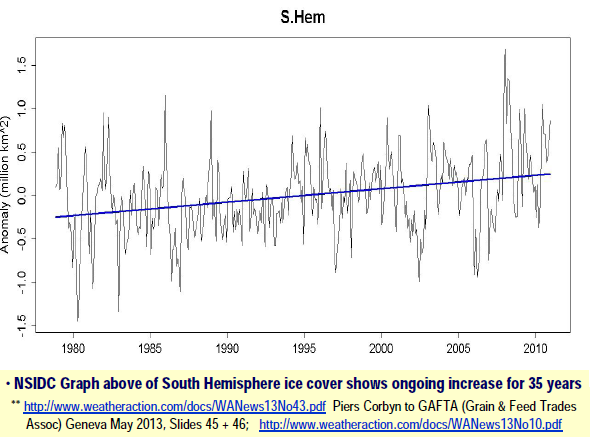 Different from solid evidence, what NASA has shown is the result of one of its ill conceived computer models, similar to the ones used by the IPCC to drive its anti=human agenda and to make us believe that we must pay carbon credits to Al Gore.

Another detail that NASA forgot to mentioned is that historically, large portions of ice have melted in the past anytime CO2 was less abundant in our environment. “Antarctic ice AS A WHOLE is increasing which reduces water in the sea. The NASA assertion is as brain-dead as saying a storm that blows down a load of trees means the end of trees,”says Piers Corbyn. According to Corbyn, the hysteria created by the media after the release of NASA’s doomsday scenario, is part of a brainwashing campaign carried out on the public which seeks to increase the level of “stupidity” to then treat them as stupid people.

Mr. Corbyn goes further to say that NASA’s story is “a desperate attempt to shore-up the failed, discredited CO2-‘Global Warming’, tax and energy price-hike scam which is easily dismissed by proper science in 2 short points”, which Corbyn explains in his report titled “UN Climate IPCC Renamed “Panel for Science Denial”

Ice Break-up has happened: During the last Mini Ice Age!

Piers Corbyn points out that the BBC issued similar alarmist statements about the Arctic in 2012. “This regional melting like that part-Arctic melting is caused by wild changes in Ocean currents which are apparent in recent years (and will continue for decades) of related wild jet stream meanders above – which gave the offset polar vortex of tremendous cold in vast sections of the USA Winter and Spring 2013-14″.

Mr. Corbyn goes on to say that “both the atmospheric Jet-Stream and ocean current wild behaviors are part of the Mini-Ice-Age Circulation the world has entered and are largely predictable”. He adds that this trends are similar to the ones seen during the Little-Ice-Age, between 1815-1816, when the sun experienced a decline in activity.

“The part-Arctic melting in 1815 and 1816 – which was also the British harvest trashing ‘Year without a summer’, was a passing event which soon reversed, as did the part-Arctic event 2012 and as will this part-Antarctic event as the Mini-Ice-Age grips tighter in both hemispheres and puts the CO2 warmist science deniers and tax-grabbers out of business,” said Corbyn.