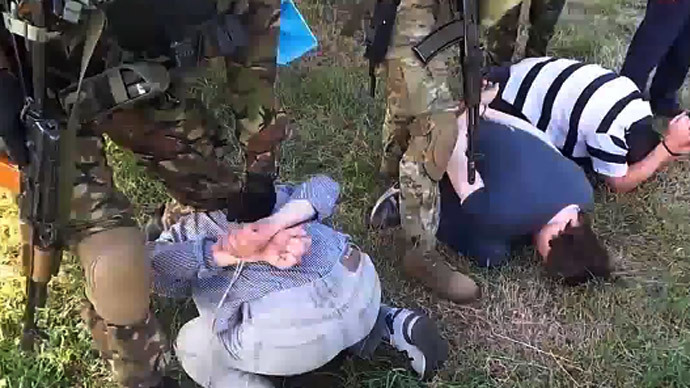 The Russian detained journalists are being investigated on the charges of “aiding the terrorist groups”. Screenshot from YouTube

The Organization for Security and Co-operation in Europe (OSCE) has urged Kiev authorities to release the Russian journalists captured in eastern Ukraine, saying that intimidation and obstruction of media working in the country is “unacceptable.”

The OSCE’s representative on freedom of the media, Dunja Mijatovic, has addressed the coup-imposed acting Ukrainian Interior Minister Arsen Avakov in a letter, urging to release the LifeNews journalists detained by Kiev forces on Sunday and thoroughly investigate the incident, Itar-Tass reports.

Mijatovic has condemned the harassment of journalists in Ukraine, noting that on May 15-16 a host of Russian journalists from Channel One, NTV, TVC and Zvezda channels were denied entrance at the country’s border despite “all of them have been accredited by the Ukrainian authorities for covering the presidential elections.”

In the letter, the OSCE representative has urged to “stop intimidating and threatening members of the media,” stressing that journalists must be allowed to do their jobs without fearing for their security.

The political powers in Ukraine “must fully realize that obstruction of the freedom of media is unacceptable,” Mijatovic said.

The detained journalists, Oleg Sidyakin and Marat Saichenko, are being investigated on the charges of “aiding the terrorist groups,” deputy secretary of Ukraine’s National Security and Defense Council (SNBO), Victoria Sumar, wrote on her Facebook page.

She added that there is “direct video evidence” of her claims, pointing at footage released on Monday showing Ukrainian troops rudely forcing a group of handcuffed people to get down on their knees and looking through belongings that appeared to have belonged to them.

Along with a close-up of the documents of two LifeNews journalists, the video showed some journalistic equipment, a pile of Ukrainian hrivnyas and Russian rubles, and a MANPAD with inscriptions in Polish. The third man shown kneeling on the ground was not identified.