German Foreign Minister Frank-Walter Steinmeier has called for restraint in imposing new sanctions on Russia, as politicians, businesses and the general public in Germany grow ever more skeptical of putting more pressure on Moscow.

Steinmeier defended the already imposed sanctions against Russia, but said that he still preferred “cooperation instead of confrontation” with Moscow, according to a Saturday interview with Thüringische Landeszeitung.

“We must avoid falling into an automatic [sanctions] mode, which leads only to a dead end and leaves no more policy options,” Steinmeier said.
The comment was made the same day Ukraine’s acting Foreign Minister Andriy Deshchytsia appealed for toughening sanctions, including imposing “preventive” ones, against Russia in an interview to another German newspaper, Die Welt.

The idea of slapping Moscow with any further restrictions appears to be lacking popular support in Germany. That was felt earlier this week in Berlin when Chancellor Angela Merkel, attending her party’s campaign event, was booed by a rally of protesters holding signs, which read ‘Europe is strong only with Russia‘ or ‘Stop the Nazis in Ukraine.’

German business is also unhappy with the attempts to hit Moscow hard with the sanctions. A confidential letter to the German government from the German-Russian chamber of foreign trade, which was leaked to Reuters by an official in Berlin warns of the boomerang effect the sanctions would have on the European economy.

“Deeper economic sanctions would lead to a situation where contracts would increasingly be given to domestic firms, projects would be suspended or delayed by the Russian side, and Russian industry and politicians would turn to Asia, in particular China,” the letter reads.

The plea to the government also says the loss of market share for German and European firms, resulting from sanctions, would be “long-term and sustained“, causing “irreparable damage” to Germany’s competitive position. 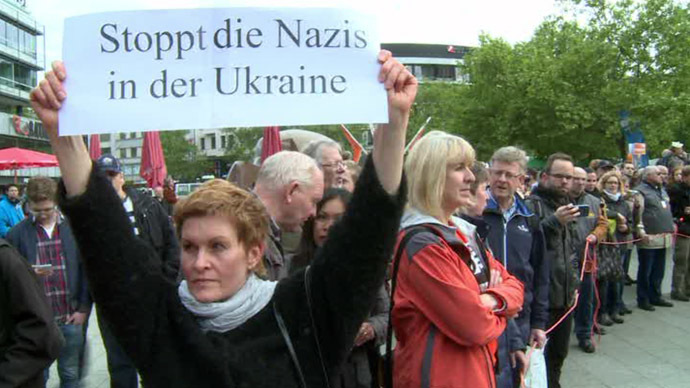 Still from Ruptly video: “Stop the Nazis in Ukraine”

More than 6,000 German firms are doing business in Russia and trade between the two countries accounts for 300,000 jobs in Germany.

The economic risks have so far not stopped Merkel from threatening Russia with more sanctions. She has been criticized for this by her predecessors, ex-chancellors Gerhard Schroeder and Helmut Schmidt.

Schmidt slammed the EU bureaucrats on Friday, accusing them of “megalomania” and attempts at “annexing Ukraine.” He told the Bild Daily that “the officials and bureaucrats in Brussels … are confronting Ukraine with the apparent necessity of having to choose between West and East.”

German Economy Minister and Vice Chancellor Sigmar Gabriel shared the opinion on Wednesday. While the politician laid the major portion of blame for the Ukraine crisis on Russia, he also admitted flaws in the EU’s policy. 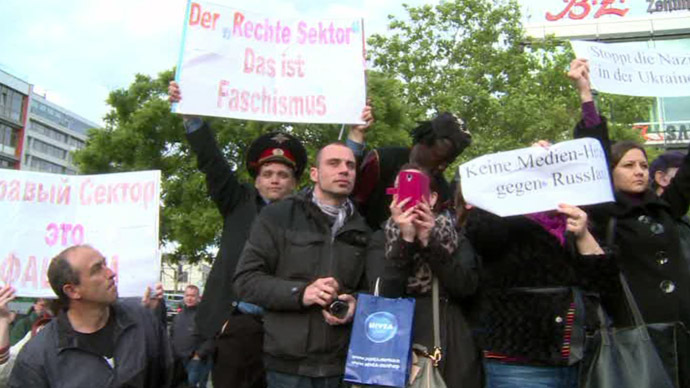 “It was certainly not smart to create the impression in Ukraine that it had to decide between Russia and the EU,” Gabriel said, as cited by Reuters.

They might be multiplying, but voices of discontent over EU’s policy on Russia are so far unlikely to stop Brussels’ sanctions rhetoric, according to director of a Paris-based think tank, the Institute of Democracy and Cooperation, John Laughland.

“The West is engaged in all-out ideological and geopolitical struggle with Russia, which it intends to win,” Laughland told RT. “There are all sorts of things Europe can do. It can ratchet up what it’s already done. It can publish longer lists of people who are subject to personal sanctions. It will definitely abandon the visa liberalization program, which Russia has been requesting for nearly a decade now. And it can even reduce economic exchanges. Russia should not be under any illusions – the European elites are prepared to cut off their nose to spite their face. In other words, they are prepared to undergo or make other people undergo severe economic pain in order to justify and entrench their ideological hostility to Russia.”