Massive climate changes are happening right now on planet earth for a multitude of reasons and this is not the place, nor do I have the time, to discuss all of them here.

I do NOT deny that the melting of Antarctic ice sheet will happen and is already happening.

However, I do Not believe that this is due to global warming.

If the elitists are indeed successful with their global warming propaganda they will earn an awful lot of money.

Even an elite puppet like Al Gore would make billions:

Why would we trust the same people that rip us off all of the time, just because they are now pretending that they really do care for the planet?

“I believe it is appropriate to have an over-representation of… how dangerous it is.”
– Al Gore

“It doesn’t matter what is true, it only matters what people believe is true.”
– Paul Watson, Greenpeace

“We have to offer up scary scenarios… each of us has to decide the right balance between being effective and being honest.”
– Stephen Schneider, lead ipcc author, 1989

“Unless we announce disasters no one will listen.”
– Sir John Houghton, first chairman of the IPCC

“The only way to get our society to truly change is to frighten people with the possibility of a catastrophe.”
– Daniel Botkin, ex Chair of Enironmental Studies, UCSB

But these clowns seem to get away with everything:

And Al Gore really is ‘brilliant’:

– Al Gore: ‘The Interior Of The earth Is Extremely Hot – Several Million Degrees!’

So here is what I believe to be the real reason behind the melting of the Antarctic ice sheet:

Volcanoes all over the planet are going crazy ….

– Volcanoes All Over The Ring Of Fire Are Erupting Right Now – Is The U.S. Next?

… and there are volcanoes under the ice …

A newly discovered volcano found buried beneath a thick layer of ice in Antarctica could speed up ice loss and raise global sea levels when it erupts, scientists say.

… and scientists have found “big variations in the temperature in the mantle across parts of Antarctica”:

“We do see these big variations in the temperature in the mantle across parts of Antarctica that will have a big effect on the ice sheet,” Wiens said.

So for me it is volcanic activity that melts the Antarctic ice sheet.

And then there is this:

– Magnetic North Pole Now Racing Nearly A Mile A Day! … The Shift Is On (Video)

Now that in and of itself should cause climate change all over the planet, or not?

And how about the Arctic ice?

How come the Artic ice sheets are rapidly expanding?

And then there is the sun, which is and has been the only engine behind global warming and cooling: 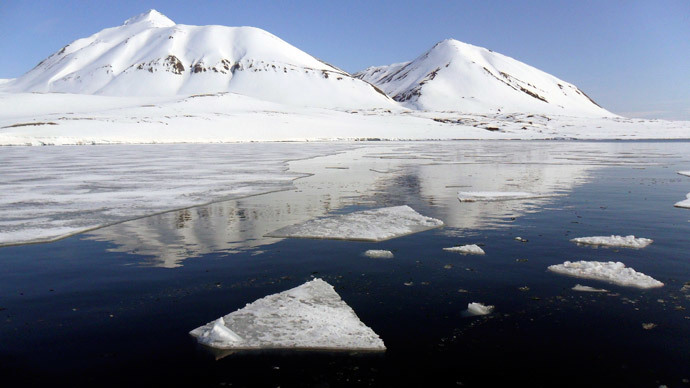 Massive regions of the ice sheet that makes up West Antarctica have begun collapsing in a process that scientists have worried about for decades and fear is likely unstoppable.

Researchers warned that the accelerated pace of disintegration is expected to remain relatively slow over the next 100 years, although after that point it will speed up so fast that it could become a major issue for seaside cities. Ocean levels could rise by at least three meters, according to two papers scheduled for publication this week in the Science and Geophysical Research Letters.

“This is really happening,” Thomas P. Wagner, chief of the NASA program on polar ice, told the New York Times Monday. “There’s nothing to stop it now. But you are still limited by the physics of how fast the ice can flow.”

The authors of both papers conclude that the cause of the melting is warm water swelling up from the depths of the ocean and warming the ice sheet from below. The disintegration is not being caused by slowly-warming air temperatures, although intensifying winds are contributing to the problems by pushing the warm water through West Antarctica.

Scientists believe the winds have been made stronger, and thus more damaging, by global warming. The problem is worsened by West Antarctica’s location, as the ice sheet sits level in a bowl-shaped depression in the earth.

The dire forecast confirmed Monday was first predicted by Ohio State University glaciologist John H. Mercer in 1978. Mercer, according to the Times’ Justin Gillis and Kenneth Chang, warned that the ice located at the edge of the bowl will melt then move into deeper water, creating more instability.

Even if the melting were to suddenly stop and revert to earlier levels, Ian Joughlin, University of Washington glaciologist and lead author of a paper in Science, said it would still be “too little, too late to stabilize the ice sheet…There’s no stabilization mechanism.”

Climate change is one topic the normally contentious scientific community agrees upon almost universally. Dating back to Mercer’s initial prediction in 1978, studies have consistently indicated that human influence on the Antarctic ice is imminent.

“The scarcity of the observations in the Antarctic makes it harder to identify and attribute temperature trends, but it does not make it impossible,” climatologist Nathan Gillett of Environment Canada told the science journal Nature in 2008. “Warming in both polar regions has many potential impacts – for example on ice-sheet melting, sea level and on polar ecosystems.”

The abstract of a study published in Nature Geoscience four years later, in December 2012, was less circumspect.

“There is clear evidence that the West Antarctic ice sheet is contributing to sea-level rise,” the authors wrote. “We confirm previous reports of West Antarctic warming, in annual average and in austral spring and winter, but find substantially larger temperature increases.

“In contrast to previous studies, we report statistically significant warming during austral summer, particularly in December-January, the peak of the melting season. A continued rise in summer temperatures could lead to more frequent and extensive periods of surface melting of the West Antarctic ice sheet.”

While the studies slated for publication this week estimated that the problem won’t become more severe for another 100 years, previous scientists have been less generous. A 2013 study published in the Proceedings of the National Academy of Sciences warned that without a drastic curb in greenhouse gas emissions at least 80 US cities and towns could be at least partly underwater by 2100. 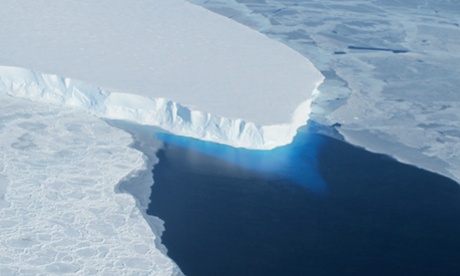 Two separate studies confirm loss of ice sheet is inevitable, and will cause up to 4m of additional sea-level rise

The collapse of the Western Antarctica ice sheet is already under way and is unstoppable, two separate teams of scientists said on Monday.

The glaciers’ retreat is being driven by climate change and is already causing sea-level rise at a much faster rate than scientists had anticipated.

The loss of the entire western Antarctica ice sheet could eventually cause up to 4 metres (13ft) of sea-level rise, devastating low-lying and coastal areas around the world. But the researchers said that even though such a rise could not be stopped, it is still several centuries off, and potentially up to 1,000 years away.

The two studies, by Nasa and the University of Washington, looked at the ice sheets of western Antarctica over different periods of time.

The Nasa researchers focused on melting over the last 20 years, while the scientists at the University of Washington used computer modelling to look into the future of the western Antarctic ice sheet.

But both studies came to broadly similar conclusions – that the thinning and melting of the Antarctic ice sheet has begun and cannot be halted, even with drastic action to cut the greenhouse gas emissions that cause climate change.

They also suggest that recent accumulation of ice in Antarctica was temporary.

“A large sector of the western Antarctic ice sheet has gone into a state of irreversible retreat. It has passed the point of no return,” Eric Rignot, a glaciologist at Nasa and the University of California, Irvine, told a conference call. “This retreat will have major consequences for sea level rise worldwide.”

The two studies between them suggest sea-level rise will be far greater than envisaged by the United Nations’ IPCC report earlier this year. The IPCC forecast on sea-level rise did not factor in the melting of the western Antarctica ice sheet.

The Nasa study, to be published in Geophysical Research Letters, studied the retreat of six glaciers in western Antarctica that are already the major drivers of global sea-level rise.

One of those glaciers, Pine Island, retreated 31km at its centre from 1992-2011. Rignot said all six glaciers together contained enough ice to add an additional 1.2m (4ft) to sea levels around the world.

In the University of Washington study, which will be published in the journal Science, researchers used detailed topography maps, airborne radar and computer modelling to reach greater certainty about the projected timeline of the ice sheet collapse.

The University of Washington researchers said that the fast-moving Thwaites glacier could be lost in a matter of centuries. The loss of that glacier alone would raise global sea level by nearly 2ft.

Thwaites also acts as a dam that holds back the rest of the ice sheet. Once Thwaites goes, researchers said, the remaining ice in the sheet could cause another 10 to 13ft (3-4m) of global sea-level rise.

“The thinning we are seeing is not just some temporary trend. It is really the beginning of a larger scale collapse that is likely to play out over a two to 10-century range,” Ian Joughin, a University of Washington glaciologist, told The Guardian.

He said the retreat would begin slowly, resulting in sea-level rise of less than 1mm a year for a couple of hundred years. But “then boom, it just starts to really go,” Joughin said.

Even under the worst-case scenario currently envisaged, the collapse of the entire ice sheet is about 200 years off – and the collapse could be as far away as 1,000 years, depending on future warming.

But collapse is inevitable, the scientists said. Joughin put the most likely timeframe at between 200 and 500 years.

The two teams of scientists used airborne radar and satellites to map the layers of ice down to the sea bed, and to study the rate of glacier movement. The Nasa team also drew on observations stretching back 40 years.

Even so, Rignot said he was taken aback at how fast change was occurring.

“This system, whether Greenland or Antarctica, is changing on a faster time scale than we anticipated. We are discovering that every day,” Rignot said.

Scientists are also finding that the causes of the ice loss are highly complex – and that it is not just due to warmer temperatures causing surface melting of the ice.

Both papers said the contact between the glaciers and the relatively warmer water at the ocean depths was the main driver of the slow-motion collapse.

Rignot said that even drastic action to cut greenhouse gas emissions that cause climate change could not prevent the collapse.

“We feel this is at the point where even if the ocean is not warming up, is not providing additional ocean heat, the system is in a sort of chain reaction that is unstoppable,” he told reporters on a conference call.

The only thing that could hold the glaciers back would be a large hill or big mountain that could block the retreat, Rignot said. But there is none, he said, “So we think it is not going to be stoppable.”