While Asia in general may be slowing now that China’s epic debt creation machine is starting to break down, when it comes to trends within Asia not everyone is equal. And nowhere is this more visible than when comparing Japan, that dynamo of Asia in the 1980s and 1990s, and China, that other “New Normal” dynamo which carried the world across the Great Depression chasm. For the best representation of Japan’s epic fall from economic relevance and, inversely, China’s superpower ascendancy, here is one chart showing how vastly more relevant to Asia China now is compared to Japan just under 20 years ago. 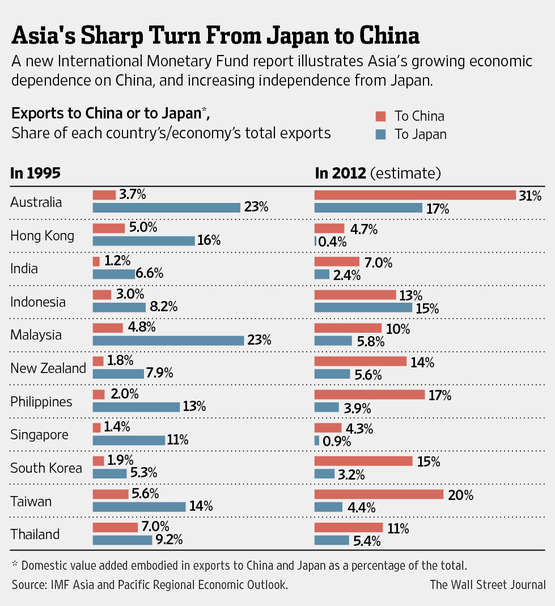 In the latest Regional Economic Outlook for Asia and Pacific, the IMF compared how much 11 export-dependent Asian economies depended on Japan and China, first in 1995 and then in 2012. In the mid-90s, all 11 relied more on Japan than China as an export market. Less than two decades later, 10 of those countries were more dependent on China, most by wide margins. The one exception: Indonesia, which still sold somewhat more to Japan.

The numbers reflect both Japan’s dramatic decline in importance over nearly 20 years of stagnation, and China’s rapid rise.

The data was part of a broader study looking at how economies in the region are becoming more integrated . “China is at the core of this, both as an assembly hub, and, increasingly, as a source of final demand,” said Romaine Duval, an IMF economist specializing in Asia, in an interview. “By contrast, Japan’s role, which was very crucial in the 1990s, is declining very rapidly.”

The data are a reminder of the constraints on U.S.-Japan efforts to contain China’s influence, and to build an Asian economic bloc that may exclude China, notably through the Trans-Pacific Partnership trade pact currently under negotiation.

As for Japan’s resulting inferiority complex:

Japanese officials say that regional influence goes beyond the size of a country’s economy. They argue that Japan — in partnership with the U.S. — offers a model of free-market democracy that other countries in the region aspire to emulate. China offers money, but no model, they assert. And China’s territorial ambitions give Japan shared cause with smaller neighbors.