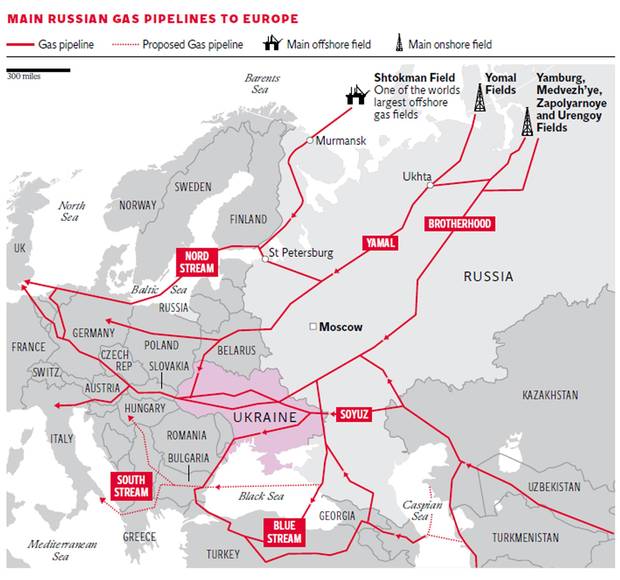 Exclusive: G7 leaders are expected to sign off on an ’emergency response plan’ to assist Ukraine this winter if its neighbour restricts gas supplies

– Ukraine crisis EXCLUSIVE: US and Europe planning to ‘cut off’ Russia’s gas supply (Independent, May 10, 2014):

Britain is drawing up plans with the US and other European countries to “disarm” the threat of President Vladimir Putin using Russian gas and oil supplies as “a weapon” against Ukraine and its Eastern European neighbours.

Next month, David Cameron and other G7 leaders are expected to sign off on an “emergency response plan” to assist Ukraine this winter if Russia restricts gas supplies.

At the same time, G7 energy ministers this week agreed a plan to eliminate Europe’s reliance on Russian oil and gas over the longer term and prevent energy security being used as political bargaining chip by the Kremlin.

Russia currently supplies around 30 per cent of all gas consumed within Europe and more than 50 per cent of the gas used by Ukraine.

In 2006, when the Russian state-controlled energy producer Gazprom turned off supplies through its Ukrainian pipeline Austria, France, Germany, Hungary, Italy and Poland reported gas pressure in their pipelines fell by 30 per cent.

While only a small fraction of gas used by the UK comes from Russia, any restriction in supply has a dramatic impact on prices.

Under the G7 proposals, support would be given to build several new liquefied natural gas (LNG) terminals across Europe, while the US would lift restrictions on the export of shale gas.

At the same time, the EU will invest in new pipelines to move gas from West to East and increase supply routes from North Africa.

Japan is also understood to be prepared to re-start some of its nuclear plants that were mothballed in the wake of the Fukushima disaster. Japan is now one of the largest importers of LNG, which has pushed up prices to record levels.

Senior Government sources said the ongoing crisis had “concentrated minds”, particularly in Europe, over the energy threat and said there was for the first time a “clear consensus” to take action.

Next month, David Cameron and other G7 leaders are expected to sign off on an “emergency response plan” to assist Ukraine this winter if Russia restricts gas supplies (Getty Images) “The diversification of sources and routes for fossil fuels is essential,” the G7 communique stated.

“No country should depend totally on one supplier. Nor should energy be used as a means of political coercion or a threat to security.”

Ed Davey, the Energy and Climate Change Secretary who represented Britain at the G7 talks in Rome, told The Independent that unless action was taken now Russia would “undoubtedly continue to use energy as a weapon”.

“It is completely unacceptable for President Putin to use Russia’s gas and oil supplies as a weapon to exert control and power over Ukraine – or any other country,” he said.

“But this is not the first time he has done this, so we have to take a stand this time, or he will undoubtedly continue to use energy as a weapon.”

Mr Davey said that the G7 had agreed a process that, over the longer term, would “disarm the threat”. But he added that in the short term there would be a plan in place within the next few weeks to support Ukraine’s energy needs this winter if there is a Russia switch-off of gas.

“We will be drawing up an emergency winter response if Russia threatens its gas supplies, which will be discussed again at the G7 Heads of State meeting next month.”

A Downing Street source confirmed that Mr Cameron “fully backed” the strategy, adding that it was possible that the G7 leader summit in Brussels could “go further”.

“We will be examining the full range of options available,” they added.

3 thoughts on “Ukraine Crisis: US And Europe Planning To ‘Cut Off’ Russia’s Gas Supply”