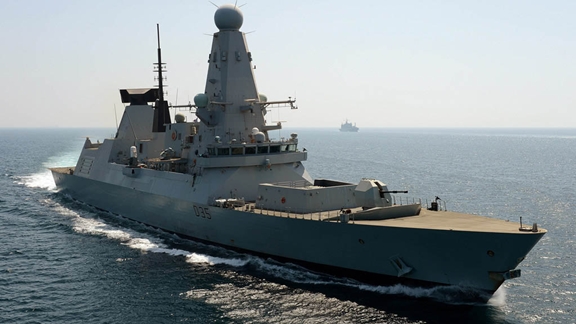 In case US destroyers operating in the Black Sea was not sufficiently clear of the western approach to containing Russia, the latest naval news will hardly boost the de-escalation theme. Reuters reports that earlier today Britain had deployed a destroyer to track a Russian aircraft carrier sailing close to its coastal waters, “the latest in a series of such incidents and a reminder of underlying tensions between London and Moscow.”

The reason the Russian navy is suddenly a concern to Britain is because the Admiral Kuznetsov, which is capable of carrying up to 26 fixed-wing fighters and 24 helicopters, had completed a deployment as part of Moscow’s naval force in the Mediterranean “and was on its way back to its base of Severomorsk in north-west Russia.” As part of this return, the carrier is to pass in proximity to the British isles, so just in case it gets any ideas, the UK is preparing a welcome party.

A spokesman from Britain’s Ministry of Defense said HMS Dragon had been “activated” on Wednesday in response to the approach of a Russian task force including the Admiral Kuznetsov, Russia’s only aircraft carrier.

“It was activated yesterday to meet the Admiral Kuznetsov task force,” the spokesman told Reuters.

This is not the first time Britain has deployed warships to keep Russia at bad:

HMS Dragon, a modern air-Defense destroyer, was deployed in similar circumstances just last month to shadow another Russian warship, the Vice-Admiral Kulakov, as it sailed past Britain.

And in other news, the VIX is sliding on the prospect that central planning is once again firmly in control, which alongside the now traditional post-open USDJPY ramp, has sent the S&P500 well on its way to new all time highs.