– Gerald Celente: Economic Collapse By The End Of The Second Quarter 2014 (Video)

– The Last Two Times This Happened, The Stock Market Crashed (Testosterone Pit, May 2, 2014)

The last two times when margin debt reversed and fell after a record-breaking spike, all hell broke loose. In 2000, it was simultaneous. In 2007, it was delayed by a few months. Today, on the surface, everything is still hunky-dory. The Dow is just fractions below its all-time high that it set on Wednesday. But beneath the surface, parts of the stock market are already coming unglued, and holders of momentum stocks have been eviscerated.

The Nasdaq Biotech Index had beautifully shot up along an exponential curve. Then the hot air hissed out of it, and it swooned 21% in six weeks. The index includes big players, like Biogen, not just startups with big dreams and no drugs. After some buying on the dip, the index closed on Thursday down “only” 15%. But that hasn’t saved smaller momentum stocks: Exelixis is down 58% from its 52-week high and 92% from its all-time high shortly after its IPO in early 2000; Halozyme is down 60% from its high in early January. And so on.

In the social media space, the bloodletting has been ugly. The Social Media ETF SOCL is down 23%, but stronger stocks like Facebook (down 16% from its high a month ago) paper over individual fiascos, like Twitter, which has plummeted 48% from its peak last year to below its IPO price.

Other momentum stocks are getting annihilated: Amazon down 25% since January, Netflix down 27% in just two months. From their peaks, Pandora crashed 39%, Gogo 63%, and Imperva, a Big Data security outfit, 65%.

Then there’s the “Cloud,” the single most hyped miracle-sector last year. Escalator up, elevator down. Workday, which sells cloud-based corporate software, went public in late 2012 and soared. Two months ago, it sprung a leak and the hot air hissed out of it. It’s down 36%. Veeve, which sells cloud-based healthcare software, has crashed 60% from its November high, shortly after it had gone public. Salesforce is down 22%. ServiceNow lost 30% over the past two weeks. LinkedIn reported a loss after hours on Thursday and got hammered. It’s now down 40% from its peak last September. Jive Software is down 71% from its high in 2012.

They aren’t just outliers. They’re included in the index of 37 publicly traded cloud companies that VC firm Bessemer Venture Partners put together and updates on a weekly basis. From the beginning of the data series in January 2012 to February 27, 2014, the index had soared 129%. But in the two months since then, the index gave up more than half of its gains and lost $58 billion in market cap!

Dizzying hype, smoke, and mirrors allowed Wall Street and Silicon Valley to slap crazy blue-sky valuations on startups that are all now trying to go public, 34 of which, at last count, have valuation of $1 billion or more. Airbnb, a bed-and-breakfast site, and Dropbox, a cloud software company, top the list with valuations of $10 billion. CIA startup Palantir [read…. Surveillance Society: If You Drive, You Get Tracked] has a valuation of $9 billion.

By comparison, Box’s $2-billion valuation doesn’t seem like a lot. But it’s a tiny money-losing outfit offering cloud-storage and collaboration software – a glorified online file cabinet – in a crowded sector with low barriers to entry, dominated by huge companies such as Google and Microsoft, and populated by startups such as Dropbox. Not exactly promising. In 9 rounds of funding, it raised a total of $399 million. One thing it does really well: burning cash. Last year, it burned $92 million. As of January 31, it had $109 million left. People are already projecting the out-of-money date. So it would be helpful if this thing could be dumped before then into the lap of a blindly adoring public.

But that blindly adoring public has evaporated apparently. And so Box decided to delay its IPO until June or later, the Wall Street Journal reported. “Since filing, we’ve planned on going public when it makes the most sense for the market,” a spokeswoman explained. And apparently, Box’s $2-billion valuation in this crashing cloud market doesn’t make enough sense.

There may be another option for it. Surely if Facebook forked over $19 billion for WhatsApp which has negligible revenues and 50-some employees, or if Google blew $3.2 billion on Nest, which is trying to market a home thermostat, why not blow some megabucks on Box. But what if the big players are seeing what everyone else is seeing, which is a crash back to reality? They might not feel like propping it up singlehandedly.

Just then, the one thing that wasn’t supposed to happen happened. Margin debtdeclined.

Margin debt, after it has been spiking for months, has a nerve-racking habit of peaking right around the time stocks crash. In the last fifteen years, it had three majestic spikes, each greater than the prior one.

It began to spike in September 2006 to max out in July 2007 at $381.4 billion, or 2.60% of GDP. In August, it declined. In November, the fetid air started hissing out of the market. Momentum stocks got killed first, and as they plunged, margin calls went out, and forced selling set in, and the selloff turned into a rout.

In August 2012, margin debt spiked again, and this time, it turned into a phenomenal spike that set a new record in July 2013 and continued going for the stars. In February, it hit $465.7 billion, 22% above the prior all-time record. And 2.73% of GDP. The highest ratio ever! 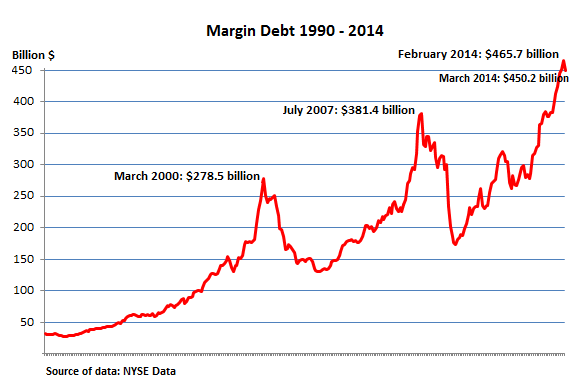 It isn’t the spike per se that matters, but when the spike reverses. So in March – the New York Stock Exchange released the numbers Wednesday evening – margin debt declined by over $15 billion. Instead of plowing $15 billion in barrowed money into stocks, as they might have during the upward momentum of the spike, investors yanked out $15 billion – for a difference of $30 billion compared to prior months. And that moolah they yanked out doesn’t sit on the sidelines. It dissipated into thin air by being used to pay off debt. The last two times that reversal happened, the whole construct came tumbling down.

Parts of the market have already tumbled. Momentum stock traders have taken a drubbing, and some of those who trade on margin received margin calls and were forced to sell, and others dumped their positions to avoid getting wiped out. It’s bloody out there, in momentum stocks. They’re the ones that go first. And the last two times, they didn’t go solo.

That’s how it always starts: with a deadly mix. Home sales are collapsing while inventories are soaring in six housing markets that had been white-hot just a few months ago. Read…. Implosion of Housing Bubble 2 Hits Six Cities in the West

1 thought on “The Last Two Times This Happened, The Stock Market Crashed”