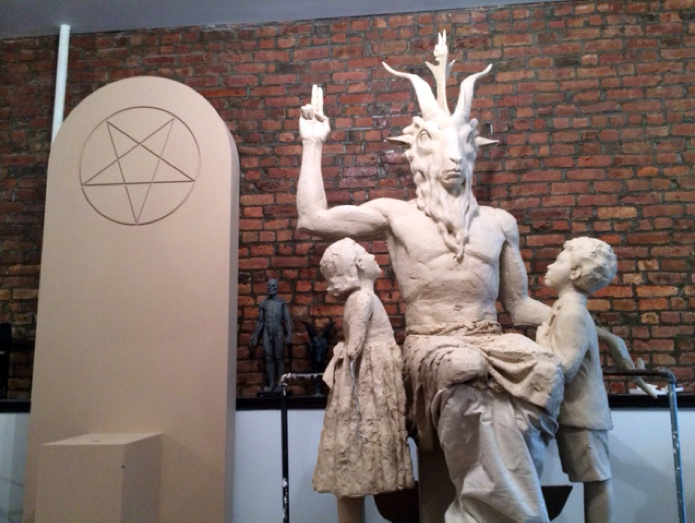 Praise be to Satan. All photos by the author, who has a shitty camera phone

– Here’s the First Look at the New Satanic Monument Being Built for Oklahoma’s Statehouse (Vice, May 1, 2014):

In January the Satanic Temple announced plans to erect a monument glorifying the Dark Lord on the front lawn of the Oklahoma Statehouse. An Indiegogo campaign was launched with what seemed like a somewhat lofty goal of $20,000, but by the time donations ended almost $30,000 had been raised. Now an artist trained in classical sculpture is toiling away in New York, crafting a Baphomet figure sitting beneath an inverted pentagram and flanked by two children gazing upward in loyalty. When it is finished, it will be cast in bronze and, the Satanists hope, eventually displayed in Oklahoma.

The statue is a direct response to the state’s installation of a Ten Commandments monument outside the Capitol in 2012. State Representative Mike Ritze paid for the controversial statue with his own money, and therefore it was considered a donation and OK to place on government property. Following that line of reasoning, the Satanic Temple submitted a formal application for their monument.

As Trait Thompson of the Oklahoma Capitol Preservation Commission told CNN last December, “Individuals and groups are free to apply to place a monument or statue or artwork.” The applications are then approved or rejected by the Commission. Unfortunately, the state has placed a halt on issuing permits for any other monuments until a lawsuit filed by the ACLU against Ritze’s Commandments monument is settled.

Nonetheless, the Satanists are building this thing, and I was offered an early peek at the work in progress by Temple spokesperson Lucien Greaves. Greaves told me he has received numerous threats from people who want to attack the sculpture, but that he “wouldn’t expect these outraged and nearly insensible reactionaries to actually know how to assault a bronze monument without severely hurting themselves in the process.” Still, he’s not taking any chances. The Temple is building a mold of the sculpture so they can pop these things out like evil, terribly expensive action figures whenever they need a new one.

“Depending on our insurance policy,” Greaves said, “we may be able to cast two from the destruction of one, expediting our arrival to the next battleground.”

The Temple estimates that the monument will be finished in a few months. Once it’s done, they plan to put it in front of the Oklahoma Statehouse regardless of the the Capitol Preservation Commission’s ongoing battle against the ACLU. They feel this should be allowed because their application was submitted before all the hullabaloo over Ritze’s monument.

The Baphomet, which will stand seven feet tall and be a testament to the glory of the Angel of the Bottomless Pit, would be placed directly beside the sculpture glorifying the laws given to Moses by the Christian God. The idea of a Satanic monument sitting on government property in Oklahoma—which is like the Bible Belt’s Bible Belt—seems a bit far-fetched, but Greaves says that “there has been quite a bit of discussion among legal scholars who recognize how difficult it would actually be for Oklahoma to turn us down… Constitutional law is quite clear on this issue: The state can’t discriminate against viewpoints. If they’ve opened the door for one, they’ve opened it for all.”

Ryan Kiesel from the Oklahoma ACLU seems to agree. He told the Libertarian Republic, “If, at the end of the day, the Ten Commandments monument is allowed to remain on the Capitol grounds with its overtly Christian message, then the Satanic Temple’s proposal can’t be rejected because it is of a different religious viewpoint.”

One popular argument being used against the Temple’s monument is that it doesn’t have “any historical significance for the State of Oklahoma,” as State Representative Paul Wesselhoft told a local news station in January. “The only reason why the Ten Commandments qualified,” he continued, “is because at the Capitol, what we do is we make laws. We are lawmakers. Well, one of the earliest laws we have are the Ten Commandments.” This, it is important to remember, was said by a current democratically elected member of the legislature.

Regardless of what happens at the statehouse, the Temple is charging ahead with the monument. And if it doesn’t end up in Oklahoma City and the Ten Commandments are forced to be removed, the Satanists will try to find a home for the Baphomet in another deserving state. Texas, for instance, has had a monument of the Ten Commandments sitting on its capitol grounds for 40 years. As Greaves put it, “There are no shortage of public locations across the US where religious monuments await a contrasting voice.”

If you would like to support the Temple’s monument, go to their website and buy some nice Satan swag. All proceeds will go toward the Baphomet.