With a diplomatic solution to the Ukraine crisis now officially out of the window as an option to de-escalate the second Cold War, and yet with both sides still leery of engaging in an overt military campaign, there is one last trump card both sides can play – natural resources. Specifically, gas for Russia, and water for Ukraine. Not surprisingly both are in play now.

Moments ago, Russia casually hinted that Ukraine should use part of the IMF aid (which has been promised in virtually all increments between $1 billion up to $18 billion, but at last check not one penny has been wired) to repay Gazprom’s debt, which is anywhere between the $2.2 billion Gazprom has said Ukraine is delinquent on for 2014 gas supplies, and an additional $11.4 billion which is what Gazprom said Ukraine’s state-owned energy firm Naftogaz owes for unused take-or-pay arrangements in 2013.

And here Russia has laid a rather unpleasant, for the interim Kiev government, covenant-trapping Easter egg. As the WSJ explained previously, the additional cash demand adds pressure on Ukraine’s already battered economy and finances, “because its ballooning debt gives Moscow the right to demand an early repayment of a loan. That could theoretically cause a domino effect on about $20 billion of Ukraine sovereign and quasi-sovereign debt.”

Specifically, Moscow provided Ukraine with a $3 billion loan in late December when it bought the country’s Eurobonds. The bond prospectus stated that the volume of total state debt and state-guaranteed debt should not at any time exceed 60% of Ukraine’s annual nominal gross domestic product.

If Ukraine fails to meet this condition, Moscow may demand an early redemption. So far the ratio is below the 60% threshold, but Russia’s finance ministry said it is monitoring the figures closely. The latest figures from Ukraine put state debt at 804 billion hryvnia ($70 billion), or 52.7% of the GDP. However, if Gazprom’s demand is met, the ratio would rise above the 60% threshold.

At that point Russia will clearly demand early payment or else hold Ukraine in default, which in turn will force the IMF to scramble to provide even more funding (more than just promises – actual wire transfers), pushing public opinion in IMF countries which certainly have expansive needs for domestic use of taxpayer funding (think Detroit) away from Ukraine and in Russia’s corner.

Which as we reported previously, is a very loud hint to Europe, that if Ukraine doesn’t pay its debt to Russia, and if the IMF doesn provide enough funding to allow the broke country to pay its debt, then Europe gas will, so very sorry, be shut off.

Sure enough, Bloomberg reported that Russia ‘hopes’ EU will soon take measures to extend financial assistance to Ukraine, including for Russian gas payments to avoid “unsanctioned gas pumping from transit volumes to Ukraine and assist in further enhancing the European energy security.”

So what does a desperate Ukraine do, realizing that all of its leverage is gone, and that its western “allies” are about to let it hang? It used the nuclear option (not very nuclear but it really doesn’t have much if any leverage), and stopped the flow of the bulk of water to now Russian Crimea. 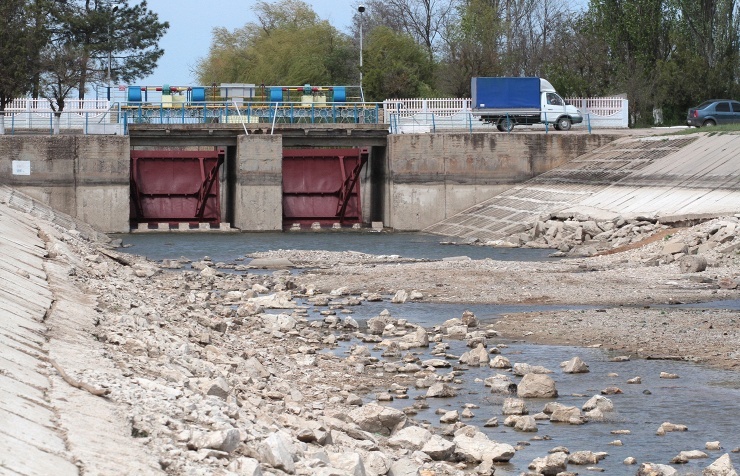 Ukraine had closed sluices of the North Crimean Canal, halting water supply from the Dnieper River to the peninsula, Ukraine’s UNIAN news agency reported on Saturday.

Crimea received 85% of fresh water through the canal, which was built in 1961-1971. It streches from the Khakhovka Reservoir to Kerch.

Alas, this plan to put Russians in Crimea in an untenable position, may have already failed. Voice of Russia reports that “Crimea will be supplied with water according to a fallback plan, there is currently no lack of fresh water in the region, the interim head of the Republic of Crimea Sergei Aksyonov wrote in his Twitter account Saturday. “Crimea will not be left without water! We have fallback plans. There are no problems with fresh water. Agricultural producers will receive compensations for the losses,” Aksyonov wrote.

Earlier the Chairman of Crimean Standing Commission of the State Council in the economic, fiscal and investment policies Vitaly Nahlupin said that republic’s authorities had offered payment in advance for the water from Dnepr, but Kiev sabotaged negotiations and only five per cent of the necessary amount of water currently comes through the North-Crimean channel. Crimea, formerly a part of Ukraine, held a referendum on reunification with Russia on March 16 in reaction to dangerous nationalist rhetoric from the new leadership in Kiev.

The Crimean authorities transfer rivers of the peninsula to the North Crimean Canal bed after Ukraine ceased completely Dnieper water supplies to Crimea, Crimean First Deputy Prime Minister Rustam Temirgaliyev said. Water supplies to Crimea via the North Crimean Canal have been stopped completely, Ukrainian mass media outlets reported on Saturday. In the past weeks the volume of water coming to Crimea via the canal was decreased significantly.

If Ukraine is hoping this move will soften Russia’s stance on gas, it is wrong – all it will do is force Russia to accelerate the implementation of infrastructure improvements in Crimea which will make it even less dependent on Ukraine. It will, however, assure that Russian exports of gas to Kiev are finished.

The only question is how much “collateral damage” Europe proper, such as Germany, suffers as a result. Ironically, such “damage” may just be the exogenous deflationary factor the ECB needs to unleash the much talked about, if very much unwanted contrary to all the jawboning, QE. After all it will be “Putin’s fault” Draghi is forced to monetize debt, in order to offset a deflationary recession that would “surely result” if and when Putin pulls the plug on European gas deliveries.

Yes – in yet another New Normal paradox, Gazpromia halting gas to Europe may be one of the most “bullish” developments (only for stocks, of course) to hit Europe in a long time.