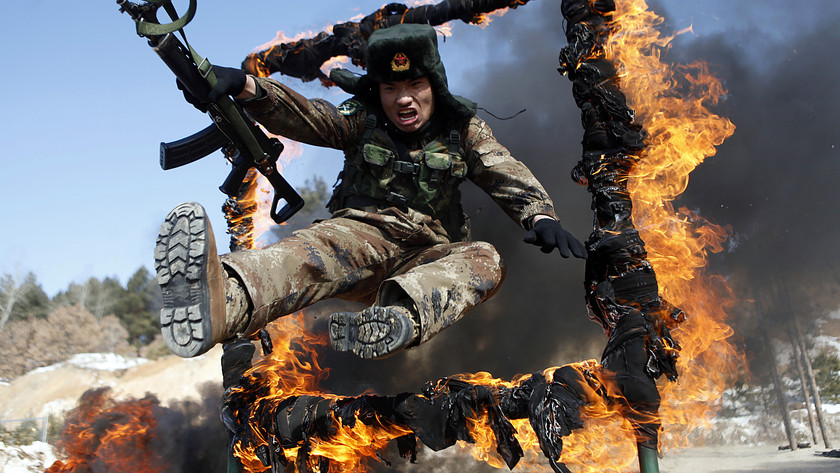 A soldier jumps over a ring of fire during a tactical training mission in Heihe, northeast China’s Heilongjiang province, on March 5, 2014

President Barack Obama’s trip to Asia this week will be dominated by a country he’s not even visiting: China.

Each of the four nations on the president’s itinerary is involved in territorial disputes with an increasingly assertive China. And years of military spending gains have boosted the capabilities of the People’s Liberation Army faster than many defense analysts expected, casting a shadow over relations between China and its neighbors and sparking doubts about long-term prospects for the U.S. presence in the Pacific.

“There are growing concerns about what China is up to in the maritime space,” said Bonnie Glaser, a China expert at the Center for Strategic and International Studies. “There’s a widely held view in the region that the U.S.-China relationship is tipping toward being much more confrontational.”

Obama arrives today in Japan, the start of a weeklong journey that also will take him to South Korea, Malaysia and the Philippines. On display throughout will be the challenge of managing the uneasy relationship with China, the U.S.’s No. 2 trading partner and an emerging rival for global influence.For almost three years, Obama has sought to reorient U.S. foreign policy toward the Asia-Pacific region after more than a decade consumed by war in Iraq and Afghanistan.

Danny Russel, assistant secretary of state for East Asia, in February labeled China’s claim to almost all of the South China Sea, hundreds of miles from its shoreline, as “inconsistent with international law.”

Admiral Harry Harris, commander of the U.S. Pacific Fleet, told an Australian audience on April 9: “I am concerned by the aggressive growth of the Chinese military, their lack of transparency, and a pattern of increasingly assertive behavior in the region.”

The statements signaled mounting U.S. alarm following China’s establishment in November of an “air defense identification zone” in the East China Sea, which overlapped with Japanese and South Korean airspace.

China’s growing strength in recent years has spawned a welter of territorial conflicts. The most serious involve uninhabited islands in the East China Sea, which Japan controls as the Senkakus and China calls Diaoyu.

Vietnam, Singapore and Malaysia are among the countries disputing China’s expansive claim to the South China Sea and its energy resources, while the Philippines last month filed a complaint against China with an international arbitration panel.

Are a Few Desert Islands Really Worth Fighting For?

Even as tensions in East Asia remain high, U.S. officials insist they can toggle between cooperation and confrontation in their dealings with the world’s second-largest economy.

“There doesn’t need to be tension and conflict,” said Ben Rhodes, deputy national security adviser. “An emerging power like China does not inherently have to come into conflict with an established power like the United States.”

Still, during his visit to Manila, Obama is scheduled to give a speech to an audience of American and Filipino service members and veterans intended to showcase “our security cooperation in the current environment in the Asia Pacific,” Rhodes said.

Earlier this month, the U.S. and the Philippines agreed on the draft of a new accord that would give American forces their broadest access to Filipino bases in more than 20 years. The deal, which doesn’t involve the permanent stationing of U.S. troops in the Philippines, is likely to be announced when Obama reaches Manila on April 28.

Ely Ratner, a former State Department China analyst, said the deal is “significant as a symbol of the degree to which the Chinese have scared the region.”

As China has prospered, it has lavished resources on the military in a manner exceeded only by the U.S., which will spend $572 billion on defense this year. In March, China said it plans to increase the PLA’s budget by 12.2 percent this year to 808.2 billion yuan, about $130 billion.

“China’s military modernization has moved more quickly than most experts had predicted,” says Ratner, now a senior fellow at the Center for a New American Security.

While China spends on its military less than one-quarter what the U.S. will devote to the Pentagon this year, China’s outlays are rising as the U.S. cuts back. This year’s Pentagon budget is less than in fiscal 2007 and is probably headed lower as Congress seeks to curb federal deficits.

Rising spending over more than a decade has transformed China’s once-primitive military into a more capable, though still limited, force. And even as China’s economic growth slows, the military expansion is likely to continue.

Though China’s rearmament has stretched from ballistic missiles to new jet fighters, the defense buildup may be having the most immediate impact at sea. The PLA navy is being transformed from a coastal defense force into a fleet increasingly able to operate in distant waters.

The U.S. Navy now regards about 65 percent of China’s destroyers and frigates as “modern” and expects that figure to increase to 85 percent by 2020, said Jesse Karotkin, senior intelligence officer for China in the Office of Naval Intelligence.

Earlier this month, U.S. Defense Secretary Chuck Hagel toured China’s first aircraft carrier, the Liaoning, the first foreign military boss to board the warship. The invitation, a nod to U.S. demands for greater transparency about the Chinese buildup, may have provided limited intelligence gains.

“The Chinese did not allow the Americans to take any photos at all,” said Glaser, a former consultant for the U.S. departments of Defense and State.

Though the refurbished Ukrainian-made vessel is a visible symbol of China’s modernization, the carrier won’t be fully operational for several years, Karotkin said.

Even then, the Liaoning will be no match for the American Nimitz-class carriers, which are longer, bigger and carry more warplanes.

For now, U.S. officials aren’t emphasizing such comparisons. The U.S. hasn’t taken sides in the disputes between China and its neighbors, saying only that conflicts should be settled peacefully. Some in China worry that Obama may use the trip to endorse the stern language his aides have used and deal a blow to Chinese hopes for a stable relationship, Glaser said.

Jeff Bader, former head of Asian affairs for Obama’s National Security Council, told reporters at an April 17 briefing that the tougher administration statements reflect a “tactical” adjustment rather than a fundamental rethinking.

For now, both the U.S. and China appear determined to keep the relationship from deteriorating. Since October, Chinese naval patrols around the disputed Senkaku/Diaoyu islands have dropped from an average of a little more than one per week to one every couple of weeks, according to an analysis of Japanese Coast Guard data.

And this summer, the Chinese for the first time are scheduled to participate in a U.S. Navy-led exercise. The PLA navy is expected to send three ships to RIMPAC 2014, the Rim of the Pacific Exercise, which occurs every two years off the Hawaiian Islands and is billed as the world’s largest naval warfare demonstration.