– US financial showdown with Russia is more dangerous than it looks, for both sides (Telegraph, April 16, 2014):

The US Treasury faces a more formidable prey with Russia, the world’s biggest producer of energy with a $2 trillion economy, superb scientists and a first-strike nuclear arsenal

The United States has constructed a financial neutron bomb. For the past 12 years an elite cell at the US Treasury has been sharpening the tools of economic warfare, designing ways to bring almost any country to its knees without firing a shot.

The strategy relies on hegemonic control over the global banking system, buttressed by a network of allies and the reluctant acquiescence of neutral states. Let us call this the Manhattan Project of the early 21st century.

“It is a new kind of war, like a creeping financial insurgency, intended to constrict our enemies’ financial lifeblood, unprecedented in its reach and effectiveness,” says Juan Zarate, the Treasury and White House official who helped spearhead policy after 9/11.

“The new geo-economic game may be more efficient and subtle than past geopolitical competitions, but it is no less ruthless and destructive,” he writes in his book Treasury’s War: the Unleashing of a New Era of Financial Warfare.

Bear this in mind as Washington tightens the noose on Vladimir Putin’s Russia, slowly shutting off market access for Russian banks, companies and state bodies with $714bn of dollar debt (Sberbank data).

The stealth weapon is a “scarlet letter”, devised under Section 311 of the US Patriot Act. Once a bank is tainted in this way – accused of money-laundering or underwriting terrorist activities, a suitably loose offence – it becomes radioactive, caught in the “boa constrictor’s lethal embrace”, as Mr Zarate puts it.

This can be a death sentence even if the lender has no operations in the US. European banks do not dare to defy US regulators. They sever all dealings with the victim.

So do the Chinese, as became clear in 2005 when the US hit Banco Delta Asia (BDA) in Macao for serving as a conduit for North Korean commercial piracy. China pulled the plug. BDA collapsed within two weeks. China also tipped off Washington when Mr Putin proposed a joint Sino-Russian attack on Fannie Mae and Freddie Mac bonds in 2008, aiming to precipitate a dollar crash.

Mr Zarate told me that the US can “go it alone” with sanctions if necessary. It therefore hardly matters whether or not the EU drags its feet over Ukraine, opting for the lowest common denominator to keep Bulgaria, Cyprus, Hungary and Luxembourg on board. Washington has the power to dictate the pace for them.

The new arsenal was first deployed against Ukraine – of all places – in December 2002. Its banks were accused of laundering funds from Russia’s organised crime rings. Kiev capitulated in short order.

Nairu, Burma, North Cyprus, Belarus and Latvia were felled one by one, all forced to comply with US demands. North Korea was then paralysed. The biggest prize yet has been Iran, finally brought to the table. “A hidden war is under way, on a very far-reaching global scale. This is a kind of war through which the enemy assumes it can defeat the Iranian nation,” said then-president Mahmoud Ahmadinejad to Iran’s Majlis. He meant it defiantly. Instead it was prescient.

The US Treasury faces a more formidable prey with Russia, the world’s biggest producer of energy with a $2 trillion economy, superb scientists and a first-strike nuclear arsenal. It is also tightly linked to the German and east European economies. The US risks endangering its own alliance system if it runs roughshod over friends. It is in much the same situation as Britain in the mid-19th century when it enforced naval supremacy, boarding alleged slave ships anywhere in the world, under any flag, ruffling everybody’s feathers.

President Putin knows exactly what the US can do with its financial weapons. Russia was brought into the loop when the two countries were for a while “allies” in the fight against Jihadi terrorism. Mr Putin appointed loyalist Viktor Zubkov – later prime minister – to handle dealings with the US Treasury.

Mr Zarate said the Obama White House has waited too long to strike in earnest, clinging to the hope that Putin would stop short of tearing up the global rule book. “They should take the gloves off. The longer the wait, the more maximalist they may have to be,” he said.

This would be a calibrated escalation, issuing the scarlet letter to Russian banks that help Syria’s regime.

He thinks it may already too late to stop Eastern Ukraine spinning out of control, but not too late to inflict a high cost. “If the US Treasury says three Russian banks are “primary money-laundering concerns”, do you think that UBS, or Standard Chartered will have anything to do with them?”

This will graduate to sanctions on Russian defence firms, mineral exports and energy – trying not to hurt BP assets in Russia too much, he adds tactfully – culminating in a squeeze on Gazprom should all else fail. Whether you are for or against such action, be under no illusion as to what it means. We would be living in a different world, and Wall Street’s S&P 500 would not be trading anywhere near 1,850.

It is true that Russia is not the power it once was, as you can see from these Sberbank charts showing relative economic size against China and Europe. 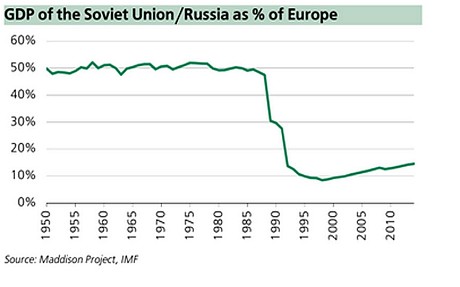 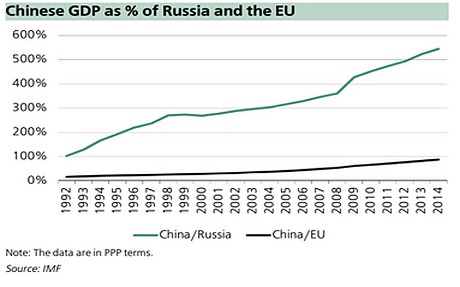 This is not a repeat of the Cold War. There is no plausible equivalence between Russia and the West, and no ideological mystique.

It has $470bn of foreign reserves but these have already fallen by $35bn since the crisis began as the central bank fights capital flight and defends the rouble. Moscow cannot easily deploy the reserves in a slump without causing the money supply to shrink, deepening a recession that is almost certainly under way. Finance minister Anton Siluanov says growth may be zero this year. The World Bank fears -1.8pc, while Danske Banks says it could be -4pc.

Putin cannot count on global allies to carry him through. Only Venezuela, Bolivia, Cuba, Nicaragua, Belarus, North Korean, Syria, Sudan, Zimbabwe and Armenia lined up behind Mr Putin at the United Nations over Crimea, a roll-call of the irrelevant.

Princeton professor Harold James sees echoes of events before the First World War when Britain and France imagined they could use financial warfare to check German power.

He says the world’s interlocking nexus means this cannot be contained. Sanctions risk setting off a chain-reaction to match the 2008 shock. “Lehman was a small institution compared with the Austrian, French and German banks that have become highly exposed to Russia’s financial system. A Russian asset freeze could be catastrophic for European – indeed, global – financial markets,” he wrote on Project Syndicate.

Chancellor George Osborne must have been let into the secret of US plans by now. Perhaps that is why he issued last week’s alert in Washington, warning City bankers to prepare for a sanctions fall-out. The City is precious, he said, “but that doesn’t mean its interests will come above the national security interests of our country”.

The greatest risk is surely an “asymmetric” riposte by the Kremlin. Russia’s cyber-warfare experts are among the best, and they had their own trial run on Estonia in 2007. A cyber shutdown of an Illinois water system was tracked to Russian sources in 2011. We don’t know whether US Homeland Security can counter a full-blown “denial-of-service” attack on electricity grids, water systems, air traffic control, or indeed the New York Stock Exchange, and nor does Washington.

“If we were in a cyberwar today, the US would lose. We’re simply the most dependent and most vulnerable,” said US spy chief Mike McConnell in 2010.

Sanctions are as old as time. So are the salutary lessons. Pericles tried to cow the city state of Megara in 432 BC by cutting off trade access to markets of the Athenian Empire. He set off the Pelopennesian Wars, bringing Sparta’s hoplite infantry crashing down on Athens. Greece’s economic system was left in ruins, at the mercy of Persia. That was a taste of asymmetry.