The US federal government might have just evoked the fury of animal right groups over their shocking treatment of cattle at the Bundy Ranch, and may soon face legal charges of severe animal abuse in Clark County, Nevada.

Federal agency’s treatment of residents at the Bundy Ranch this past week included tasering, beating, wrongful arrest, threatening residents with attack dogs, and mobilizing a federal paramilitary force whose barrels were trained on US citizens, all in all, spending at least $3 million of tax payer money in an effort to sell stolen cattle over state lines in Utah and California. A legal argument has also been made that the USDepartment of Interior’s Bureau of Land Management (BLM) is now guilty of racketeering under the federal RIC) statute (Racketeer Influenced and Corruption Organizations). If all that wasn’t enough, evidence is now emerging regarding pattern of extreme cruelty and abuse, and suspected culling of animals from the Bundy Ranch.

Nevada Assemblywoman Michelle Fiore has released new shocking information and images which document the horrors which BLM agents have inflicted on previously happy and healthy livestock.

Graphic Photo – One of many casualties from the #BundyRanch standoff. More to follow soon. #ShameOnBLM pic.twitter.com/G96lxmRece

During a live radio broadcast of The Pete Santilli Show on GNM, Fiore reveals new details of “the BLM’s method of herding where they have slaughtered horses and cows. This time we have video of it, and pictures of it.”

“I did post the first picture of one cow who was shot in the back of the head from a helicopter (photo above).”

“I personally helped save a calf who still had an umbilical cord attached to her as she was separated from her mom (see photo via Twitter below). It is such a disgusting event (…)… they (BLM) don’t herd cattle – they slaughter cattle”, said Fiore.

At the Bundy ranch working to save this calf retrieved nearly dead from BLM pic.twitter.com/NA8qUQHHRf

According to the Bundy family, in total, 27 baby calves have been rescued thus far, but farmers are still having trouble matching them up with their mothers.

“If you look at the stewardship of land, and herding of cattle, first of all these particular cattle that were grazing on 600,000 acres – understand that when the Bundy family would herd their own cattle, there would be water taps to where the cattle would go down to the water and herd them humbly and softly – no cruelty, no abuse, herding them to where the cattle could get injured”.

“We now have an evidenced-based argument now with how the BLM cannot take care of that cattle. We have cows giving birth (in the federal pen) where baby calves have been stepped on and killed.”

“This is the BLM’s practice. They herd animals with helicopters, ATV’s, and shotguns… If any cows get out of line – they get a bullet in the back of the head”.

“Near their compound, right off the highway, they were digging holes (…)… They tried to bury some cows on the compound, but I guess they didn’t dig the hole deep enough, so throw a cow in and they dirt over him and you have cows legs cows’ legs sticking up out of the dirt”. 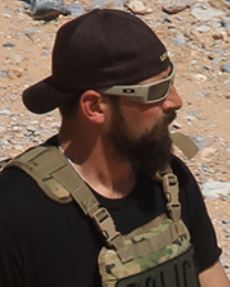 Earlier this week GMN revealed a secret recording of the BLM Special Agent in Charge, Daniel P. Love (photo, left), who had stated that the BLM have not killed any cattle. Fiore’s reply to Love’s claim:

It was confirmed by ranchers and observers last week of how the BLM and their “contract cowboy” had deployed aggressive practices whilst rustling the Bundy’s herd, using tactical helicopters (image, below) forcing cattle to removal zones, often times driving cows uphill in 90F heat – a lethal practice known to cause tremendous stress and exhaustion to the animals, causing sickness and even premature death. 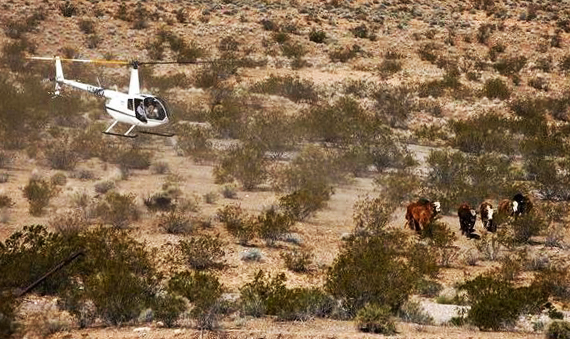 Last week, farmers suspected that BLM agents were also scooping up the dead animals with heavy equipment like Backhoe diggers, and either burying carcasses somewhere on the 600,000 acre public grazing land, or disposing of them somewhere off site.

In addition, reports by observers confirmed that spring heifers who were subject to abusive BLM tactics were forced to abandon some calves behind to hide in the desert bush (a common practice by mothers who are being rustled, who later can backtrack to retrieve their young) putting the calves at risk of death.

Critics now believe the BLM and Clark County Sheriff’s Office could be facing a strong legal challenge for their reckless handling of the ill-fated operation underlined by a litany of both human and animal rights abuses. 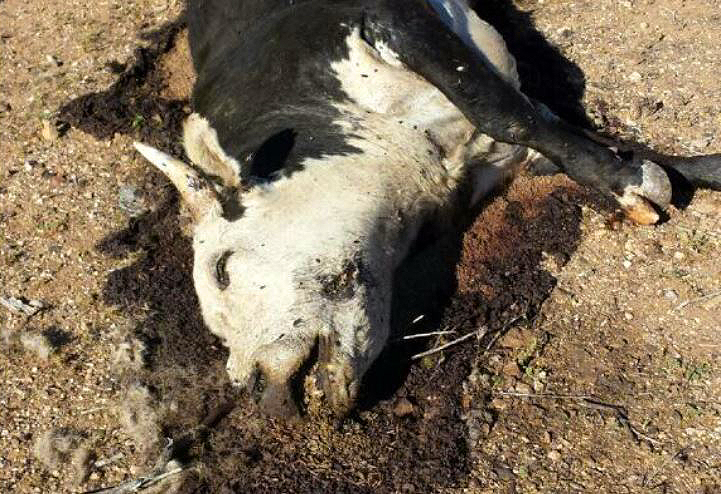 The federal agency that backed down over the weekend in a tense standoff with a Nevada rancher is being accused of leaving a trail of wreckage behind.

“They had total control of this land for one week, and look at the destruction they did in one week,” said Corey Houston, friend of rancher Cliven Bundy and his family. “So why would you trust somebody like that? And how does that show that they’re a better steward?”

The BLM and other law enforcement officials backed down on Saturday in their effort to seize Bundy’s cattle, after hundreds of protesters, some armed, arrived to show support for the Bundy family. In the end, BLM officials left the scene amid concerns about safety, and no shots were fired.

The dispute between the feds and the Bundy family has been going on for years; they say he owes more than $1.1 million in unpaid grazing fees — and long ago revoked his grazing rights over concern for a federally protected tortoise. They sent officials to round up his livestock following a pair of federal court orders last year giving the U.S. government the authority to impound the cattle.

The feds, though, are being accused of taking the court orders way too far.

On a Friday night conference call, BLM officials told reporters that “illegal structures” on Bundy’s ranch — water tanks, water lines and corrals — had to be removed to “restore” the land to its natural state and prevent the rancher from restarting his illegal cattle operation.

However, the court order used to justify the operation appears only to give the agency the authority to “seize and impound” Bundy’s cattle.

“Nowhere in the court order that I saw does it say that they can destroy infrastructure, destroy corrals, tanks … desert environment, shoot cattle,” Houston said.

Bundy’s friends say the BLM wranglers told them the bulls were shot because they were dangerous and could gore their horses. One bull was shot five times.

But Houston said the pen holding the bull wasn’t even bent. “It’s not like the bull was smashing this pen and trying tackle people or anything,” he said. “The pen is sitting here. It hasn’t moved. No damage whatsoever. Where was the danger with that bull?”

Plus he said BLM vehicles appear to have crushed a tortoise burrow near the damaged water tank. “How’s that conservation?” he asked.

The BLM has not yet responded to a request for comment on these allegations.

Bundy has refused to pay the grazing fees or remove his cattle, and doesn’t even acknowledge the federal government’s authority to assess or collect damages.

The bureau has said if Bundy wasn’t willing to pay, then they would sell his cattle.

However, there was a problem with that plan — few in Nevada would touch Bundy’s cattle for fear of being blacklisted.

“The sale yards are very nervous about taking what in the past has been basically stolen cattle from the federal government,” Nevada Agriculture Commissioner Ramona Morrison said.

Documents show the BLM paid a Utah cattle wrangler $966,000 to collect Bundy’s cattle and a Utah auctioneer to sell them. However, Utah Gov. Gary Herbert refused to let Bundy cattle cross state lines, saying in a letter: “As Governor of Utah, I urgently request that a herd of cattle seized by the Bureau of Land Management from Mr. Cliven Bundy of Bunkerville, Nevada, not be sent to Utah. There are serious concerns about human safety and animal health and well-being, if these animals are shipped to and sold in Utah.”

That letter was sent three days before the BLM round-up, which is why the cattle were still being held Saturday in temporary pens just a few miles from Bundy’s ranch. Morrison says BLM was sitting on cattle because it had no way to get rid of them — setting up a potential tragedy as orphaned calves were not getting any milk and feed costs were about to skyrocket.

The showdown is far from over. The BLM says it will “continue to work to resolve the matter administratively and judicially,” though Bundy still doesn’t recognize federal authority over the federal lands that he continues to use in violation of a court order. The federal judge who issued that decision says Bundy’s claims “are without merit.”

That order from October 2013 says Bundy owes $200 per day per head for every day he fails to move his cattle. That amounts to roughly $640 million in damages owed to the federal government for illegally grazing his cattle.