If you listen carefully, you can hear the stampede of politicians distancing themselves from their once best-friend – Hotel magnate Sant Singh Chatwal – as AP reports, he plead guilty Thursday to charges he secretly funneled more than $180,000 in illegal campaign contributions to three unnamed candidates and coached someone to lie about it.

Without the contributions “nobody will even talk to you,” Chatwal said. “That’s the only way to buy them, get into the system.”

Welcome to the ugly truth of American politik. 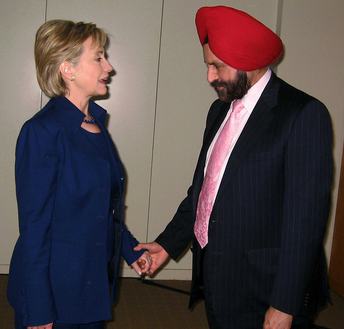 The FT details that Sant Singh Chatwal, chairman of Hampshire Hotels Management, pleaded guilty on Thursday to making more than $180,000 in illegal federal campaign donations to three candidates through “straw donors” who were reimbursed, the DoJ said in a statement.

He raised at least $100,000 for Hillary Clinton in her 2008 presidential campaign against Barack Obama.

The justice department did not comment on whether Mrs Clinton was one of the three candidates, but it said there was no allegation that candidates took part in or were aware of Mr Chatwal’s scheme.

As AP explains the fraud was extensive…

Court papers allege that between 2007 and 2011, Chatwal used his employees, business associates and contractors who worked on his hotels to collect contributions from straw donors in Queens, Long Island and elsewhere. He then arranged to pay the donors back, a violation of the election laws.

As part the scheme, an unnamed business associate submitted a bill to Chatwal for $104,745 in 2011 for purported work done for one of Chatwal’s companies. Prosecutors allege that $69,000 of the total actually was reimbursement for money the associate had raised via straw donors.

In a conversation recorded in 2012, Chatwal instructed the associate that if he were asked if Chatwal gave him the money back, he should respond, “Never.”

Chatwal directly backed several Democratic candidates with his own money — at least $31,200 since 2004, according to Federal Election Commission records.

And leaves the ugly truth of American politics behind…

An informant caught Sant Singh Chatwal on tape in 2010 explaining that he believed his illegal fundraising bought him access to people in power.

Without the contributions “nobody will even talk to you,” Chatwal said. “That’s the only way to buy them, get into the system.”