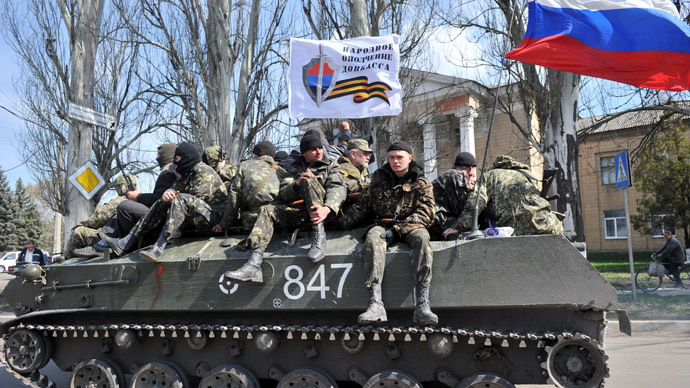 Men wearing military fatigues sit by a Russian flag and a white flag reading “People’s volunteer corps of Donetsk” as they ride on an armoured personnel carrier (APC) in the eastern Ukrainian city of Slavyansk on April 16, 2014. (AFP Photo)

According to Interfax, citing local self-defense activists, some 300 Ukrainian troops agreed to lay down their weapons and “go home” following negotiations in Slavyansk.

“We managed to negotiate with them. About 300 military – only some of those who closed around the city – decided to lay down their arms and go home,” a self-defense activist was quoted as saying.

Conflicting reports are emerging about whether the activists would or would not allow the troops to keep their weapons and APCs. According to Western media journalists present at the scene, the locals would not allow them to take back the APCs surrendered earlier, but the soldiers were allowed to march away with their rifles.

The people cheered the troops as they started leaving Slavyansk.

Meanwhile, the anti-government activists guarding the armored vehicles have said that they did not “seize” them as the media claimed, and that the troops “switched sides” peacefully. “They were not seized by the self-defense forces. In fact, the Ukrainian troops arrived here flying a Russian flag. In this way, they have taken the side of the people,” a Slavyansk activist told Russia-24 TV. Photos from the scene now show women and children climbing onto the APCs and taking photos with the armed men in camouflage with St. George ribbons. 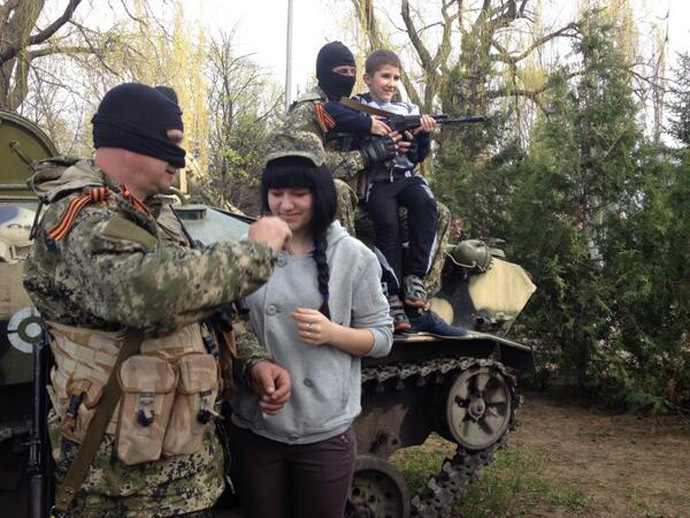 Similar developments were also seen in another Donetsk region city, Kromatorsk, where Ukrainian troops began entering Tuesday after taking a nearby airfield by force, captured a day earlier by armed self-defense activists.

As Ukrainian armored vehicles rolled into the city’s center Wednesday, they were surrounded by locals and surrendered. Some of the APCs were filmed flying Russian flags in support of the locals. Kiev eventually confirmed that six APCs were taken away in Kromatorsk but claimed that they were “captured by the extremists.” Earlier, coup-imposed Kiev officials dismissed the news as “fake” and even claimed that by raising Russian flags the troops “infiltrated” the areas “controlled by Russian Army units and separatists.”

In the village of Pchyolkino, south of Kromatorsk, locals blocked part of a large convoy of armored vehicles. The people are demanding that the troops turn back their vehicles and leave for Dnepropetrovsk, where they are stationed.

Pchyolkino residents negotiated with the blocked troops peacefully and also brought drinks and food to the “exhausted” soldiers, vp.donetsk.ua reported from the scene.

“They’ve had us running around for about two months now. We’re being sent to one city, then to the next. We cannot even wash, or eat normally or rest,” one of the troops was quoted as saying.

RT’s Ruptly agency also spoke with Ukrainian soldiers in Kramatorsk. According to Ruptly’s Monika Kalinowska, the soldiers blamed the media for giving “fake information” and “creating unnecessary tension.” One of the soldiers told Kalinowska that he found “no aggression” coming from the eastern Ukrainians, except for cases of few “drunks” approaching them with questions.

Soldier just told me it’s a war in media, not here in Kramatorsk. #ukraine @ruptly