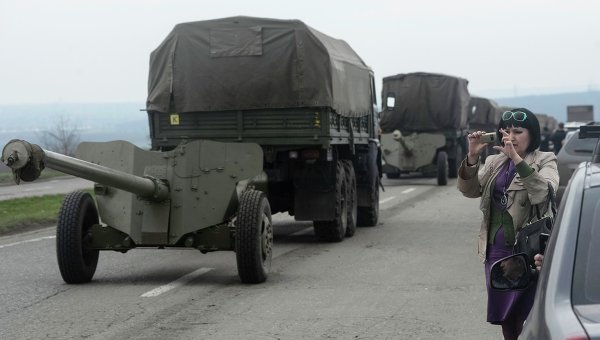 Military vehicles of the Ukrainian Army near Donetsk (Archive)

KIEV, April 15 (RIA Novosti) – Ukraine’s parliamentary speaker and interim President Olexander Turchynov has announced the start of a military operation in the north of Donetsk Region, where demonstrations by pro-federalization protesters are ongoing.

“It will be conducted gradually, in a responsible and balanced [manner]. The main goal is the protection of people,” Turchynov said, commenting on the operation during a session of parliament on Tuesday.

On Monday, Turchynov announced that the National Security and Defense Council had made a decision to start the security operation in eastern Ukraine, involving the armed forces, in a bid to avoid the Crimean scenario in the region.

He later suggested that a UN peacekeeping force could enter eastern Ukraine to resolve the crisis. Russian Foreign Minister Sergei Lavrov said the proposal was “over the top,” adding that the Kiev authorities were “inventing fables” to justify their “aggressive intentions.”

On Monday, Lavrov criticized the United States and European countries for attempting to blame Moscow for events in Ukraine. He also justified the right of the pro-federalization protesters in the country to rally amid the failure of the coup-imposed Kiev government to ensure their interests.

Residents of the country’s east, which has a large proportion of Russian speakers, fear the rise of ultranationalist forces in the country’s central government and have demanded greater autonomy, including on the issue of language.

The rallies of pro-federalization activists began last month in eastern Ukraine, with protesters in Donetsk, Luhansk and Kharkiv calling for a referendum on the autonomy of their respective regions.

On Saturday, the protests spread to several more cities of Donetsk region, including Slaviansk, Mariupol, Yenakievo, Kramatorsk and a number of small towns, where protesters seized government buildings. Last Monday, pro-federalization activists declared the formation of the independent People’s Republic of Kharkiv and Donetsk People’s Republic.

On Sunday, Ukrainian security forces launched an operation in Slaviansk, Donetsk Region, to quash unrest by demonstrators who had seized local government buildings. At least one person was killed and nine injured in the clashes, according to local health officials. Activists said at least three people died.

Crimea, a predominantly ethnic Russian region, rejected the legitimacy of the new self-proclaimed Western-backed government, and moved to rejoin Russia last month after the government in Kiev introduced measures aimed against Russian-speakers in the country.