Following last night’s protest in front of the Kiev parliament by Maidan faithful and others who had gotten sick and tired by their government doing absolutely nothing to preserve the cohesion of the Ukraine – both west and east – this morning acting president Turchynov, realizing he is between a rock and a hard place and suddenly his position is quite precarious, finally announced that he had issued an order to the country’s military to begin operations to retake government buildings seized by pro-Russia separatists in eastern areas.  Oleksandr Turchynov, also the parliament speaker, said the deployment had begun in the Donetsk region, where many of the approximately 10 towns affected by the protests are located. 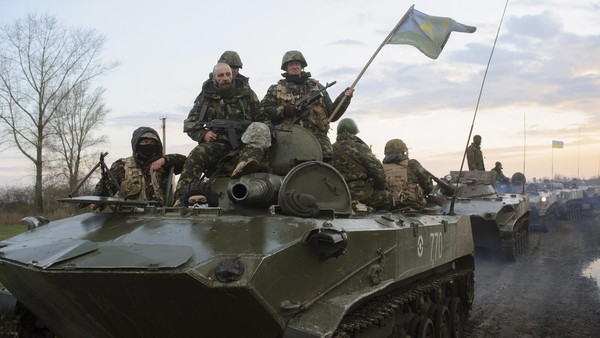 “Overnight, an antiterrorist operation began in the north of Donetsk,” Mr Turchynov said in parliament, one day after his deadline for the demonstrators to surrender passed. “But it will be phased, responsible and balanced. The purpose of the actions, I stress once again, is to protect the citizens of Ukraine.”

Hours later Ihor Dyomin, a Donetsk region interior ministry spokesman, said that pro-Russia protesters who seized a police building in the town of Kramatorsk earlier this week had left voluntarily. It is not clear how many protesters there were or if they were armed.

Video posted on the internet on Tuesday morning showed pro-Russian activists blocking a Ukrainian army tank on the outskirts of Slavyansk, one of the cities and towns where law enforcement and regional government buildings had been seized by pro-Russian separatists.

Nela Stepa, mayor of the city where at the weekend separatists seized a regional law enforcement building, appeared on television saying that armed men dressed in camouflage “that don’t hide that they are from Crimea . . . from Russia” had also seized the city council building.

“I don’t know who or what this is,” she said in reference to a new mayor the grouping claims to have appointed for the city.

Kiev has also said it is open to dialogue with pro-Russia groups in the east, a move Sergei Lavrov, Russia’s foreign minister, said on Tuesday was “certainly a step in the right direction, albeit very belated”.

It remains to be seen if Russia’s response is also phased, responsible and balanced. For now, all signs point to no:

Dmitry Medvedev, Russia’s prime minister, was much more pessimistic, responding on his Facebook page to the deaths of two people in Slavyansk on Sunday.

“Blood has once again been spilled in Ukraine,” he wrote. “The country is anticipating civil war.”

To be sure, Ukraine is sticking to its narrative, most likely dictated to its by CIA director Brennan who as it was revealed “secretly” visited Kiev over the weekend, which is that it is all Russia’s fault for destabilizing the region:

Kiev’s SBU state security service said on Tuesday it had identified a Russian special forces officer, Ihor Stryelkov, as leader of a “diversion group which is terrorising the local population, seizing administrative buildings and destabilising the social-political situation in eastern regions of Ukraine”.

Pro-Russia separatists detained by the SBU in recent days “recognised” Mr Stryelkov’s voice, the SBU claimed, as the person “giving them instructions to seize administrative buildings in Kharkiv”, the largest city in eastern Ukraine.

Mr Stryelkov, according to the SBU, arrived in Crimea last month to co-ordinate “the activities of Russian military personnel and special forces there seizing Ukrainian armed services posts there and regional government”.

Still, the day following Putin’s explicit and latest warning to Obama that only he can now stop bloodshed in Ukraine, we can’t help but feel that the situation in east Ukraine is about to truly spiral out of control… which of course should send stocks soaring in this bizarro, centrally-planned world in which nothing makes sense any more.