And what would we do without the internet and the Second Amendment? 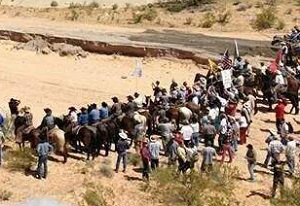 This has just been confirmed by the Bundy family on their Facebook page. Also, here’s a breaking video showing the cattle being released.

A tense standoff had taken place for several hours, where armed citizens of the United States of America — many on horseback — drew a literal line in the sand and refused to back down until BLM released the cattle.

The photo below — one of the most iconic photos of recent American history — shows armed American citizens in a standoff with BLM thugs (in the white SUVs) who engaged in the felony theft of the Bundy family cattle and committed numerous felony assaults on American citizens.

As you can see in the photo, a brigade of armed Americans — many waving American flags — blockaded the road at a strategic roadway point. BLM, a tyrannical police state gang conducting illegal, illegitimate operations, earlier ordered the FAA to ban all civilian flights over the region in an effort to enforce a media blackout (possibly in preparation for an armed assault on the protesters).

Government thugs had inflamed the situation by ordering attack dogs to attack innocent bystanders and saying, on the record, that they “hoped the protesters were ready to die.”

Outraged by the lawless aggression of an out-of-control government, American citizens banded together to stand up to tyranny, even at the risk of being killed in the process. 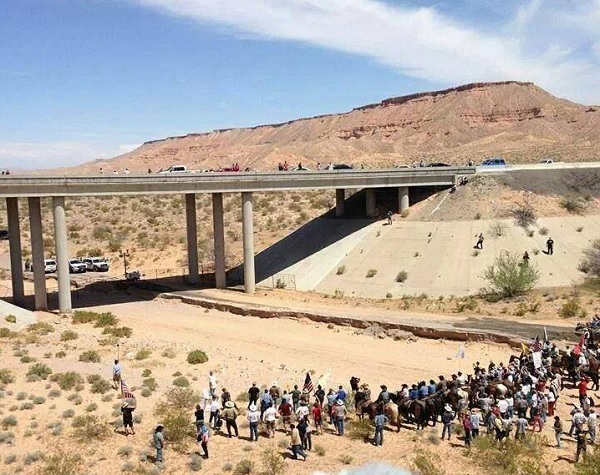 This video by Next News Network carries more details of the intense standoff.

• No shots have been fired at this point. (Apparently BLM is wise enough not to cause themselves to be slaughtered.)

• Cell phone service has reportedly been restored to the area (it was previously reported as being cut off by the government).

• The FAA’s flight restrictions have still NOT been lifted.

• The lamestream, anti-American media continues to utterly ignore this historical moment in U.S. history, pretending it isn’t happening. The ignoring of this story is a total indictment of the controlled, propaganda-spewing mainstream media which has willfully abandoned America and now represents only anti-American interests that are attempting to destroy this nation.

• More armed U.S. citizens are still on their way after joining the call to defend the Bundy Ranch against the tyranny of oppressive government.

Here’s another photo of the standoff, taken at an unknown time: 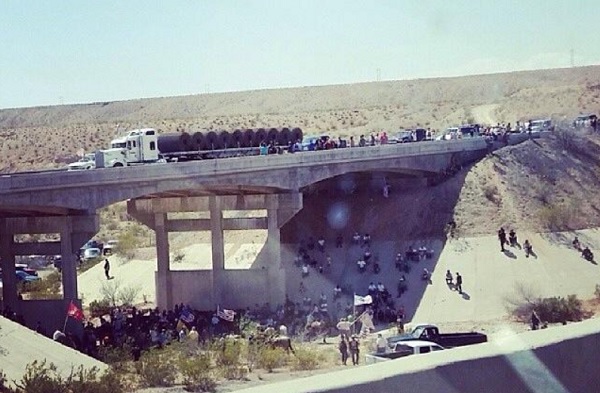 2 thoughts on “The People Vs. BLM: Liberty Defeats Govt. Tyranny As Feds Release All Cattle At Bundy Ranch”