– One Killed, Many Wounded After Shooting Breaks Out Between Ukraine Special Forces And Pro-Russia Separatists (ZeroHedge, April 13, 2014):

“Ball is in Kiev’s court.” That is how we concluded our article yesterday reporting that Moscow won’t accept force against demonstrators after Kiev warned it would use special forces to quell ongoing “terrorist” uprisings across cities in east Ukraine.

Predictably, Ukraine couldn’t wait to shoot the ball right back at Russia and re-escalate (in hope that the west will finally stand up and side along the acting government in what continues to be a very foolish gambit) and early this morning local time, units of the Ukraine special forces started an anti-terrorist operation in eastern town of Slavyansk, where police station was seized yesterday by separatist protesters, as reported by the Interior Minister Arsen Avakov posts on Facebook, who also warned local residents to stay inside, saying separatist protesters have opened fire in direction of approaching special police units.

Moments later the operation turned deadly after at least one member of the special forces was killed and as many as 9 wounded, as well as an unknown number of casualties on the “separatist” side. But most importantly, Russia now has a pretext to step in and “defend” its ethnic population just as it warned it would do. 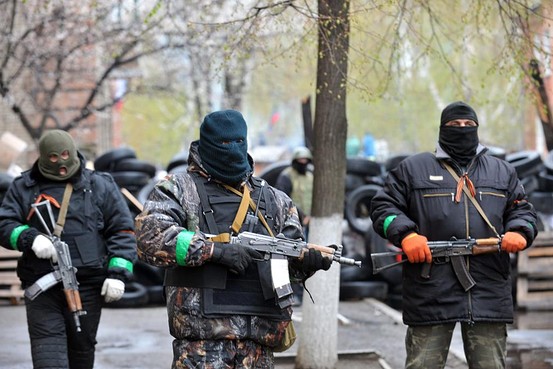 A Ukrainian special forces officer was killed and five others wounded Sunday in a gunbattle with heavily armed pro-Russian forces who had commandeered a police station in the eastern city of Slavyansk, Ukraine’s top police official said.

The firefight erupted early Sunday as Ukrainian forces moved to clear the building where approximately 20 men dressed in camouflage had seized control the day before. Interior Minister Arsen Avakov said an unspecified number of the pro-Russian activists had been wounded in the exchange.

This wasn’t the only casualty as other firefights broke out in close proximity to the first one.

In addition to the dead and wounded at the police station, Russia’s Interfax news agency reported one person was killed and four others wounded in a gunfight at a checkpoint along the road leading from Slavyansk to the regional capital of Donetsk. The Slavyansk operation, dubbed an “antiterrorist action,” involved Ukraine’s state security service and military and police units from across the country, Mr. Avakov said. “May God be with them,” Mr. Avakov wrote on his Facebook page early Sunday, announcing the operation had begun.

A short time later, he said that the men holed up inside the building had begun firing at the Ukrainian forces and urged residents in the center of the eastern Ukrainian city to remain indoors and away from their windows.

Residents reported seeing armored personnel carriers approaching the city and helicopters flying overhead. Russian television station Rossiya 24 reported that tires that had been used as a barricade in front of the building had been set on fire and black smoke could be seen above the city center.

So now that Ukraine has had its official warning by Lavrov, which it openly ignored, and commenced a crack down on the separatist forces, who may well have been camouflaged Russian army units just like in the Crimea scenario, Kremlin now sees itself fully in its right to cross the border and “defend” people in the east. To be sure, NATO and the west will hardly share Russia’s interpretation of events which only means that the situation will further escalate some more.

And if not in Slavyansk, there are more than enough other cities that allow both sides to escalate into lethal gunfights. Reuters reports:

Separatist protesters on Sunday seized control of the mayor’s office in the town of Mariupol, eastern Ukraine, on the Azov Sea, local media said.

The protesters entered the building following a rally involving about 1,000 people demonstrating in favor of the creation of a separate republic in eastern Ukraine, a local journalist for the newspaper Priazovsky Worker said.

Police did not try to stop them. They entered the offices, took down the Ukrainian flag and were erecting barricades outside the building, the journalist said.

A photo from Mariupol:

As we said earlier, if this is merely a gambit by Kiev to provoke western nations into action, it will likely fail. Poland PM Tusk explained why earlier when speaking on Polish radio Zet on events in the Ukraine, when he said that he’s “concerned” there is “relatively little will” in EU, other countries to “strongly support Ukraine. Nobody accepts Crimea annexation, but nobody wants to head for sharp conflict. Which also means Poland itself is isolated in a potential expansion next: Tusk said it’s important Russia doesn’t threaten Poland’s security “we need to know how to mobilize international community.” Hopefully it will have more success than Ukraine.

Sure enough, the best the west can mobilize was and continues to be nothing more than harsh language.

Something Putin knows too well and continues to capitalize on.

1 thought on “One Killed, Many Wounded After Shooting Breaks Out Between Ukraine Special Forces And Pro-Russia Separatists”