Ever since Goldman’s anti-HFT Op-Ed less than a month ago, and since the even more recent full-hearted support by Goldman of Michael Lewis’ most recent entry into the anti-HFT crusade (one promoting the Goldman-supported IEX exchange), one thing has been clear: the days of market structure in its current format are numbered. This was further confirmed after Goldman exited both its legacy Spear Leeds & Kellogg designated market making post at the NYSE, and is said to be winding down its market-dominating dark pool, Sigma X.

It also means that our 5 year crusade against HFT – not because we want it replaced with a different, Goldman-backed exchange but because HFTs inherently destabilize the market (see May 2010 and the now daily flash crash in individual stocks and/or exchanges) – and specifically those most profitable but also most parasitic and predatory HFT strategies… 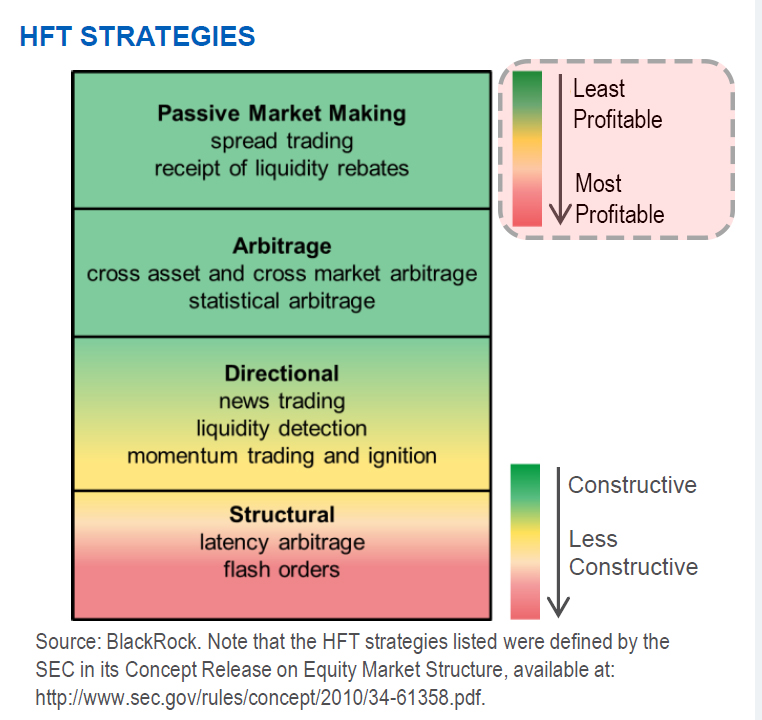 … is coming to an end, with both the DOJ, FBI and SEC finally paying attention.

Sure enough, Post reports that just three weeks after the Gary Cohn Op-Ed, the SEC is “preparing to remove some high-frequency trading firms.”

In a purge of computerized markets, prompted by public outrage unleashed by Michael Lewis’ “Flash Boys,” the SEC’s campaign will see numerous enforcement actions, new rules and new business practices — a sweeping overhaul that could benefit the beleaguered New York Stock Exchange, The Post has learned.

“You’ll probably see the commission coalesce around those enforcement cases and then bring new rules on high-frequency trading,” a source with knowledge of the SEC’s thinking told The Post. “There’s a lot of pressure on the SEC to act.”

More importantly, the broken maker/taker model, i.e., in which HFTs are paid rebates for “liquidity providing” limit orders, even if these are merely frontrunning of large block orders, is about to be overhauled:

Intense lobbying by the NYSE’s owners, IntercontinentalExchange Group (ICE), for reform of the controversial “maker-taker” rebate rule for buying or selling shares is likely to get more sympathy. The rule’s abolition or amendment, seen as increasingly likely, would help reverse NYSE’s losses to rivals who have taken volume with their better pricing.

“Back in the day, we used to call it pay to play (now it is called maker-taker), and we used to vigorously fight against it,” said NYSE floor trading vet Doreen Mogavero. “You know, the practice was originally devised by Bernard Madoff — need I say more?”

The source familiar with SEC thinking says the NYSE could get a boost as regulators force out dodgy players among the market’s 45 secretive dark pools, 200 “internalizers” and 13 public exchanges. But it might also be a mixed blessing.

“Yes, some high-frequency guys are going to be taken out of the game, but the NYSE might get rules they don’t care for,” the source said. “The ability of exchanges to develop and [profit] from special-order types is going to be stopped — and this exchange business of selling direct data feeds is going by the wayside.”

It’s not just HFTs, bur dark pools are about to fall under the spotlight:

The SEC is also mulling a trial run for a so-called trade-at rule, requiring brokerages and dark pools to send their orders to the NYSE, Nasdaq and other public exchanges unless better stock prices occur elsewhere, sources say.

The confirms what Reuters reported several days ago when it said that “U.S. securities regulators are considering testing a proposed reform that could drive business to major stock exchanges and away from alternative trading venues such as “dark pools” that critics say may be hurting investors by reducing the quality of pricing.”

The proposal, which has so far only been discussed among staff involved in policymaking at the U.S. Securities and Exchange Commission, could limit how much trading occurs inside brokerages and in dark pools, according to people familiar with the matter.

The measure aims to address a concern among some regulators and academics about the increasing level of trading that happens outside of exchanges.

They say that the amount of trading being done in the “dark” means that publicly quoted prices for stocks on exchanges may no longer properly reflect where the market is, meaning that investors may not be getting the best prices for their trades.

One can keep reading here, or merely glance the graphic below to see how much trading has moved from lit exchanges ever since Reg NMS to dark venues. In short: unlit has lost a stunning 40% of volume as increasingly more traders seek to avoid being frontrun by the HFT parasites.

Why is all this happening? Because as everyone should know by now, what Goldman wants, Goldman gets. And Goldman wants a complete overhaul of a market that is systematically broken. Our only question is can this overhaul take place without an epic market rout as the HFTs suddenly all go into “Off” mode as their 25 year old math PhD operators look for greener pastures (and to get the hell out of Dodge before the subpoenas come flying in).