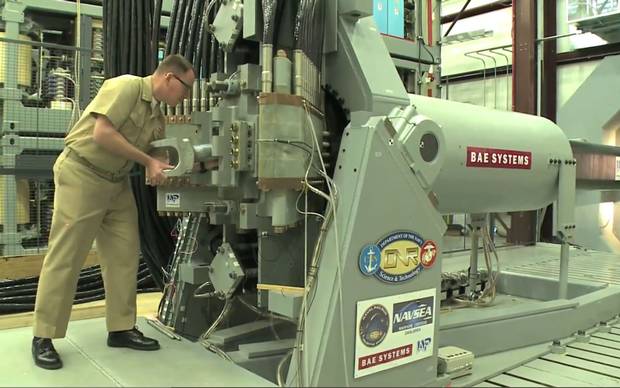 The Navy has said that weapon represents “the future of naval combat” with current prototypes capable of punching through the hull of ship “like a freight train” due to be installed and tested on ships by 2016. 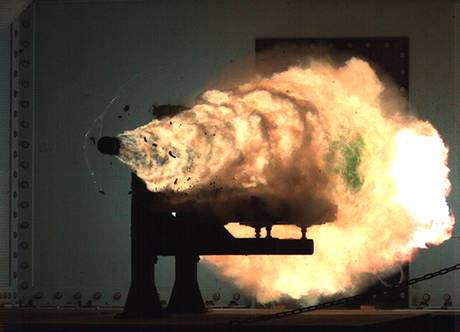 A still of the weapon test firing at the Naval Surface Warfare Center in Jaunary 2008.

“Frankly, we think it might be the right time for them to know what we’ve been doing behind closed doors in a Star Wars fashion,” he said. “It’s now reality. It’s not science fiction. It’s real and you can look at it.”

Because railguns do not require any explosive shells, the price of firing the weapon is massively reduced, with a 10kg projectile costing just $25,000 -1/100th the cost of a conventional missile.

“I really think it will give our adversaries a huge moment of pause to go, ‘Do I even want to go engage a naval ship?’ Because you are going to lose. You can throw anything at us, and the fact that we can shoot a number of these rounds at very affordable costs – it’s my opinion that they don’t win,” said Klunder.

The technology for railguns was first proposed in the early 20 century but until now the cost of supplying the necessary electrical power has stopped the weapon from becoming practical.

The Navy has been developing the technology since 2005, with the team responsible adopting the latin motto of ‘Velocitas Eradico’, roughly translating as ‘I who am speed, eradicates’.