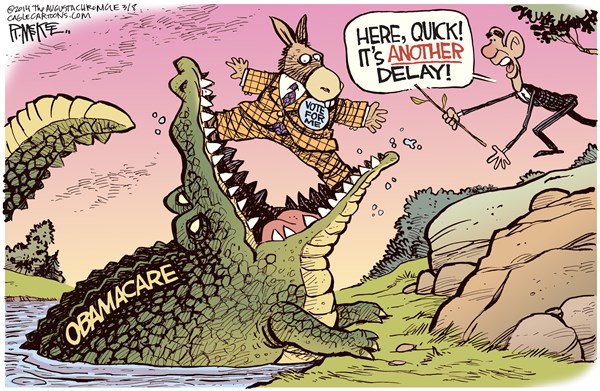 The deadline to enroll in Obamacare has been extended once again. One reason why the delay is happening is because US citizens are hesitating to sign up. In spite of recent allegations that Obamacare would not be postponed after March 31 of this year, the White House changed its mind last minute. According to a Washington Post report on March 25, the Obama Administration decided to allow for an extension on the open enrollment timeframe for two to three weeks in at least 36 states.

This brand new postponement is just another headache that has become yet another nightmare in the Patient Protection and Affordable Care Act. In the beginning, Obama gave an open enrollment period of six months to sign up for the universal healthcare act that has been coined Obamacare. Now, Americans are being given even more time to sign up, with the extension period being between two to three weeks for individuals.

For companies, the initial deadline for an employer to offer the affordable healthcare coverage to employees was given an entire year extension from January 1, 2014 until January 1, 2015. However, that has since changed. Firms that are considered mid-sized will now comply with a new cut-off date of January 1, 2016.

The setback for the individual mandate into the middle of April is being implemented due to the stagnating sales numbers in health insurance through the state-managed health insurance exchanges that are obtained through healthcare.gov. The Obama Administration holds onto hope that by putting off the deadline to a later date, this small measure will motivate procrastinators and others who have been lost in the process of joining up to finally get on the list. It is really trying to enlist as many participants as it can into the new healthcare system, though it is unclear as to whether this tactic will work to bring up the numbers.

Critics are curious to know whether past delays were entirely legal, however the Patient Protection and Affordable Care Act seems to point out that the Obama Administration has absolute control over the resetting of this sort of deadline. No language in the law specifies the length of the duration period or puts a cap on the time limits it may continue on for.

A spokesperson for the Department of Health and Human Services, Joanne Peters, told the Washington Times, “We are experiencing a surge in demand and are making sure that we will be ready to help consumers who may be in line by the deadline to complete enrollment — either online or over the phone.”

According to the Obamacare mandate, individuals, who have no insurance and are not enrolled in the universal healthcare plan by the deadline date, will be forced to pay a penalty fee that is unless they meet the exemptions requirements. For 2014, the fine is set at $95 for one adult, $47.50 for one child, and up to $285 for a family (or one percent of taxable income, whichever number is larger). The delay gives Americans a little more time to decide if they would like to sign up or not. It is still unclear if yet another delay will take place, due to the amount of enrollees.

1 thought on “Obamacare Deadline Date Extended Again, US Citizens Hesitant To Sign Up”