– J.P. Morgan imposes its own sanctions on Russia by blocking money transfer (The Daily Sheeple, April 2, 2014):

If we recall back in September of last year, the first individuals to speak to President Obama at the White House during the government shutdown were not leaders in Congress, but 15 bankCEO’s.  This highly disturbing event appears to be a pre-cursor to the power that financial institutions have over the U.S. government, and brings to mind former activities by the banking industry in helping both V.I. Lenin and Adolph Hitler achieve power over countries outside of the authority of America’s elected leaders.

Which is why an interesting course of action taken by J.P. Morgan Chase towards Russia and the Russia’s government on April 1 may once again prove to Americans just how much power the banks have over the State Department, and even the White House.

…while the headline sanctions so far have involved mostly freezing of Russian politician and oligarch assets in jurisdictions in where there were no such assets, it appears that JPM has not only escalated on its own but taken the Russian sanctions to an entirely new level: one which may quite promptly devolve into a complete monetary blockade of all of Russia.JPM may have just done is launch a preemptive strike which would have the equivalent culmination of a SWIFT blockade of Russia, the same way Iran was neutralized from the Petrodollar and was promptly forced to begin transacting in Rubles, Yuan and, of course, gold in exchange for goods and services either imported or exported.  – Zerohedge

To date, the sanctions imposed by President Obama on Russia have been little more than apaper cut, and lack any and all support from NATO and the European Union.  However, what J.P. Morgan has implied it is planning to implement would be considered a major push towards forcing Russia’s hand in cutting off the West from complete hegemony over the reserve currency, and begin a monetary war that will thrust the world into a global recession and destruction of the current monetary system. 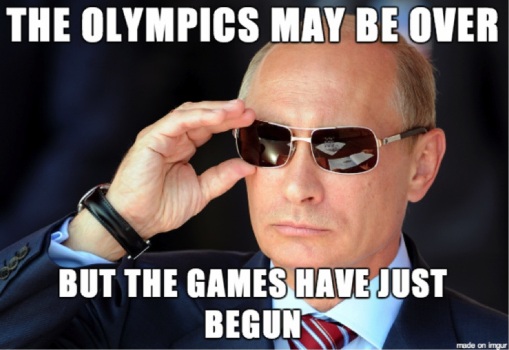 Economist Jim Willie has stated over the past month that Ukraine will be America’s Waterloo, and usher in the end of the Petro-Dollar and Western financial system.  And for a bank like J.P. Morgan Chase, who in itself is insolvent but appears to have the power to dictate economicpolicy for the government of the United States, the ramifications of its life expectancy becomes much shorter, especially considering that they had to sell their Manhattan headquarters recently to a Chinese national corporation.