With Chinese authorities increasingly looking like they are sticking to their reform promises, fighting moral hazard and allowing defaults to occur (in a completely ‘contained’ way, of course); the continued crackdown on graft and government corruption has hit a new high (or low). As Reuters reports, Chinese authorities have seized assets worth at least 90 billion yuan ($14.5 billion) from family members and associates of retired domestic security tsar Zhou Yongkang, who is at the center of China’s biggest corruption scandal in more than six decades. 71-year-old Zhou has been under house arrest since first being investigated late last year but the size and scale of the corruption is unprecedented including 300 apartments, 60 vehicles, bonds, stocks, and gold – “it’s the ugliest in the history of the New China.”

More than 300 of Zhou’s relatives, political allies, proteges and staff have also been taken into custody or questioned in the past four months, the sources, who have been briefed on the investigation, told Reuters.

The sheer size of the asset seizures and the scale of the investigations into the people around Zhou – both unreported until now – make the corruption probe unprecedented in modern China and would appear to show that President Xi Jinping is tackling graft at the highest levels.

Zhou, 71, has been under virtual house arrest since authorities began formally investigating him late last year. He is the most senior Chinese politician to be ensnared in a corruption investigation since the Communist Party swept to power in 1949.

“It’s the ugliest in the history of the New China,” said one of the sources, who has ties to the leadership, requesting anonymity to avoid repercussions for speaking to the foreign media about elite politics.

However, some suggest it’s just politics…

But it may also be driven partly by political payback after Zhou angered leaders such as Xi by opposing the ouster of former high-flying politician Bo Xilai, who was jailed for life in September for corruption and abuse of power.

“Zhou Yongkang is tough and claims its political persecution,” the source said.

But the confiscations are widespread…

The first two sources said prosecutors and the party’s anti-corruption watchdog had frozen bank accounts with deposits totaling 37 billion yuan and seized domestic and overseas bonds and stocks with a combined value of 51 billion yuan after raiding homes in Beijing, Shanghai and five provinces.

Investigators had also confiscated about 300 apartments and villas worth around 1.7 billion yuan, antiques and contemporary paintings with a market value of 1 billion yuan and more than 60 vehicles, the sources added. Other items seized included expensive liquor, gold, silver and cash in local and foreign currencies.

About 10 officials who held a rank equivalent to at least vice minister were also under investigation, the sources said.

More than 20 of Zhou’s bodyguards, secretaries and drivers had also been detained, the sources said. Many other family members and associates had been questioned.

But Xi has a problem with his next steps…

Since becoming head of the party in late 2012 and then president a year ago, Xi has vowed to go after both powerful “tigers” and lowly “flies” in an effort to crack down on the corruption he says threatens the party’s very existence.

But Xi is in a dilemma over whether to put Zhou on trial lest it further undermine public faith in the party, the three sources said, referring to the growing disillusionment in China over rampant graft and abuse of power. 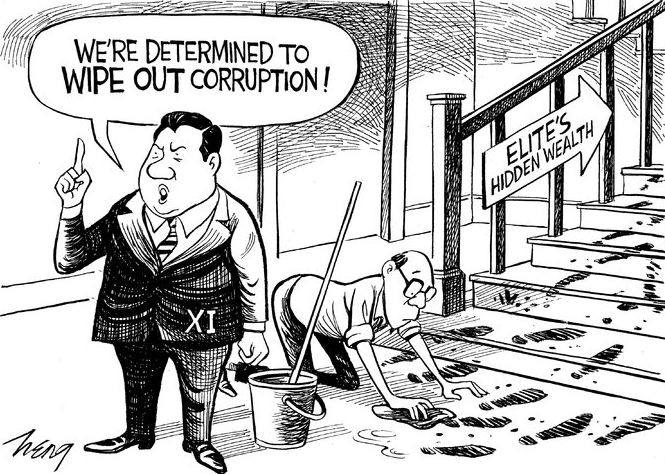 It seems with the confiscations this weekend, Xi is sending a rather loud signal to his political frenemies.