The number of people unemployed for 27 weeks or longer in the US rose by 203,000 in February to 3.8 million. As we noted previously, this is the desperate shadow hanging over the so-called recovery. What is more problematic is the stunning findings of a new study that only 11% of the long-term unemployed in any given month found full-time work a year later. 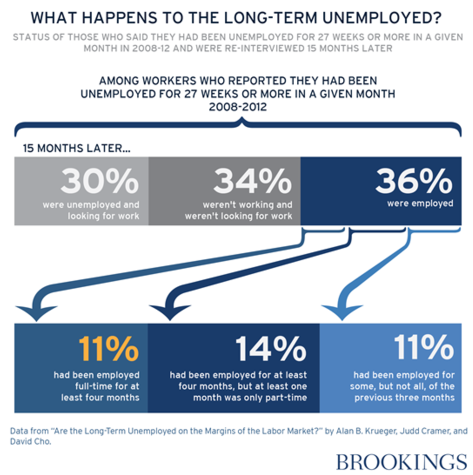 Via The LA Times,

…three Princeton economists found that only 11% of the long-term unemployed in any given month found full-time work a year later.

The economists tested the hypothesis of whether a low supply of jobs or discrimination by employers contributed to long-term unemployment.

The answer? Probably both.

“The demand-side and supply-side effects of long-term unemployment can be viewed as complementary and reinforcing of each other as opposed to competing explanations,”

The paper found that those who have been out of work for months come from all industries, but are primarily concentrated in sales, service and blue-collar jobs. The share of the long-term unemployed from sales and service jobs was 36%, and from blue-collar jobs 28%.

Even in states with booming economies, such as North Dakota, the long-term unemployed find landing a full-time job elusive.

The economists found that in 2012:

The paper concludes that “a concerted effort will be needed to raise the employment prospects of the long-term unemployed.” Otherwise, these job seekers will continue to drop out of the workforce and hold the economy back, the economists said.

This is a major problem since, as we noted previously, echoing Irving Fisher, it appears we have reached a permanently high plateau in the duration of unemployment in America…

So, 1 in 9 of the long-term unemployed (over 27 weeks) find a job again… and the mean duration of unemployment is 37 weeks! Hope and Change that!