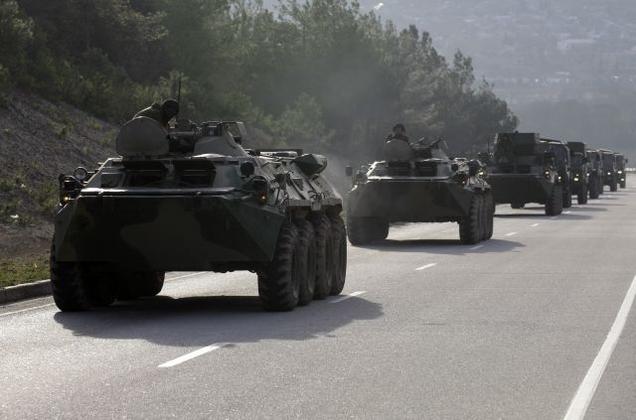 A convoy of military vehicles bearing no license plates travels on the road from Sevastopol to Simferopol, Crimea, Ukraine, on Monday. Photo:AP

The Parliament in pro-Russian Crimea declared independence from Ukraine as a first step towards joining Russia.

Lawmakers on Tuesday overwhelmingly adopted a “declaration of independence of the Autonomous Republic of Crimea” that will take effect if voters say “yes” to Crimea becoming part of Russia in a referendum set for coming Sunday.

The referendum will ask the people of Crimea to choose between joining Russia and staying with Ukraine as a self-governed autonomy.

The declaration referred to Kosovo’s secession from Serbia, which was endorsed by the United Nations International Court of Justice.

Ukraine’s Parliament in Kiev hit back threatening to dissolve the Crimean legislature unless it cancels the referendum. In a resolution passed on Tuesday Ukrainian legislators gave the Crimean parliament until Wednesday to comply.

“We are going our own way and we’re trying to do it quickly,” he told reporters in Simferopol, capital of Crimea.

The United States appears to have abandoned hope to persuade Russia to back off on Crimea. Secretary of State John Kerry declined a Russian invitation to visit Moscow this week for talks with President Vladimir Putin.

State Department Spokeswoman Jen Psaki said in a statement that Mr Kerry “would welcome further discussions… if and when we see concrete evidence that Russia is prepared to engage on [U.S.] proposals.”

Washington wants Moscow to stop the Crimea referendum and open direct talks with the new government in Kiev. Russia has refused to recognise the new authorities and insisted on rolling back the situation to February 21, when President Viktor Yanukovych signed a West-brokered peace accord with the opposition. The deal fell through the same day as armed protesters stormed government offices and Mr Yanukovych fled Kiev.

Moscow made its point again on Tuesday when Mr Yanukovych reaffirmed that he was still Ukraine’s legitimate President and that power in Kiev had been grabbed by a “band of ultra-nationalists and neo-fascists” bent on starting a “civil war.”

“I declare that presidential elections appointed for May 25 by the clique who seized power in an unconstitutional coup will be absolutely illegitimate and unlawful,” Mr Yanokovych said in a statement he read out in Rostov-on-Don a week after his first press conference in Russia, where he has found shelter.

Contrary to expectations Mr Yanukovych said nothing about the coming referendum in Crimea, apart from mentioning that Crimea was “splitting away” through the fault of the new Ukrainian authorities.

In fresh military muscle flexing Russia launched on Tuesday a second massive war drill this month. The Defence Ministry said 3,500 paratroopers will be dropped from 36 warplanes at an undisclosed location during the three-day “anti-terrorist” exercise, the first such drill in 20 years. Earlier in March Russia held snap war games involving 150,000 troops near Ukraine’s border.