As we reported yesterday, after getting permission to cross the Bosphorus, the guided-missile destroyer USS Truxtun departed the Greek port of Souda Bay on its way to the Black Sea. As of a few hours ago, it is already there. Sky News reports that the USS Truxtun passed the Dardanelles strait earlier today on its way to the Black Sea amid heightened tension over the crisis in Ukraine and reports that Russia has now 30,000 troops in Crimea. 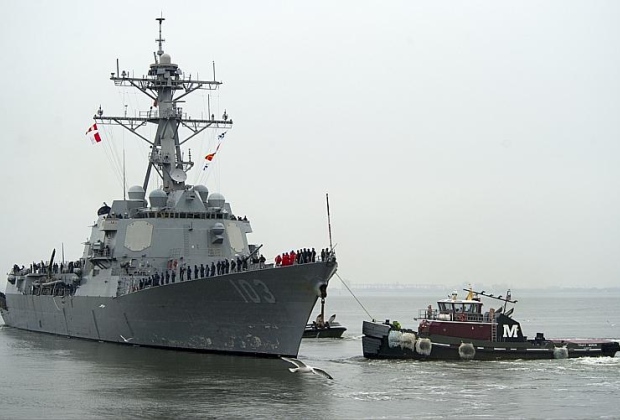 The naval escalation is not the only arms build up in proximity to the Ukraine: the Pentagon said six US F-15 fighter jets have arrived in Lithuania to bolster air patrols over the Baltics. The fighter jets and 60 US military personnel landed at Siauliai Air Base in Lithuania, adding to the four F-15s and 150 troops already there to do the air patrol mission.

As for the pretext for the Truxtun’s move, it is only 300 miles away from Sevastopol for one simple reason: naval exercises.

Joint naval exercises with Bulgarian, Romanian and US vessels are to take place in the Black Sea on March 11.

The naval forces of all three nations have stated no connection between the upcoming drill and the tensions on Ukraine’s Crimean Peninsula, where the Russian Black Sea Fleet is based, the Bulgarian National Radio has reported.

Vessels participating in the event include a Bulgarian frigate, three Romanian ships and US destroyer USS Truxtun. The US military described the joint military maneuvers as a “routine” deployment scheduled last year, long before the standoff in Ukraine.

Crimea, however, is some 500 km to the north-east of the location where the drill is to be carried out.

According to a statement by the US Navy, the Truxtun left Greece on Thursday after it was granted passage through the Black Sea Straits by Turkey, which controls their traffic.

And the Russian ICBM launch was just part of a “routine” drill too.