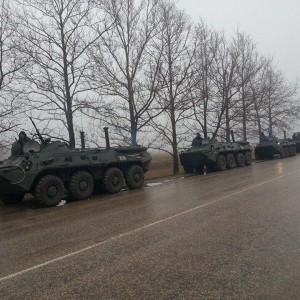 Russia will never, ever give up Crimea without a fight.  Anyone that thinks otherwise is just being delusional.  The Russian Black Sea fleet’s main base at Sevastopol is far too strategically important.  In addition, ethnic Russians make up approximately 60 percent of the population of Crimea, and most of the population is rabidly pro-Russian.  In fact, many prominent Crimean politicians are already calling for reunification with Russia.  So if you have been thinking that Russia is just going to fold up shop and go home now that pro-European protesters have violently seized power in Kiev, you can quit holding your breath.  The truth is that Russia is more than willing to fight a war over Crimea.  And considering the fact that vitally important pipelines that pump natural gas from Russia to the rest of Europe go right through Ukraine, it is not likely that Russia will just willingly hand the rest of Ukraine over to the U.S. and the EU either.  If the U.S. and the EU push too hard in Ukraine, a major regional war may erupt which could ultimately lead to something much larger.

Russia and Ukraine have very deep historical ties.  Most Americans may not think that Ukraine is very important, but the Russians consider Ukraine to be of the utmost strategic importance.

As an American, how would you feel if another nation funded and organized the violent overthrow of the democratically-elected Canadian government and replaced it with a government that was virulently anti-American?

By doing this to Ukraine, the United States and the EU are essentially sticking a pin in Russia’s eye.  Needless to say, Russia is extremely angry at this point and they are gearing up for war.

#2 Russian military vehicles have been photographed in the main square of Sevastopol.

#3 Russian military jets near the border with Ukraine have been put on combat alert.

#4 Russia has ordered “surprise military exercises” along the Ukrainian border.

#5 In connection with those “exercises”, it is being reported that Russia has deployed 150,000 troops along the border with Ukraine.

#6 Russia already has approximately 26,000 troops stationed at their naval base in Sevastopol.

Russia’s large landing ship Nikolai Filchenkov has arrived near the Russia Black Sea Fleet’s base at Sevastopol, which Russia has leased from Ukraine since the fall of the Soviet Union in 1991.

The ship is reported to be carrying as many as 200 soldiers and has joined four additional ships carrying an unknown amount of Special Forces troops. Flot.com also reported over the weekend that personnel from the 45th Airborne Special Forces unit and additional divisions had been airlifted into Anapa, a city on Russia’s Black Sea coastline.

“Measures are taken to guarantee the security of our facilities.”

Moscow earlier revealed that it would be ready to go for war over the Crimea region in order to protect the large population and army installations.

“If Ukraine breaks apart, it will trigger a war. They will lose Crimea first [because] we will go in and protect [it], just as we did in Georgia,” an unidentified Russian official told the Financial Times.

#10 Officials in Sevastopol have “installed” a Russian citizen as mayor of the city.

#11 Approximately 120 pro-Russian gunmen have seized the Crimean parliament building and have raised the Russian flag.

Viktor F. Yanukovych, the ousted president of Ukraine, declared on Thursday that he remained the lawful president of the country and appealed to Russia to “secure my personal safety from the actions of extremists.” Russian news agencies reported that he had already arrived in Russia, but officials did not immediately confirm that.

No matter what the “new government” in Kiev says, and no matter how hard the U.S. and the EU push, Russia will never give up Crimea.  The following is what a recent Debka article had to say about the matter…

There is no way that President Vladimir Putin will relinquish Russian control of the Crimean peninsula and its military bases there – or more particularly the big Black Sea naval base at Sevastopol. This military stronghold is the key to Russia’s Middle East policy. If it is imperiled, so too are Russia’s military posture in Syria and its strategic understandings with Iran.

The people of Crimea do not want Russia to leave either.  In fact, they overwhelmingly want Russia to help defend them against the “new government” in Kiev.

As you read this, militia groups are being formed in Crimea to fight back against the “nationalist invasion” that they are anticipating.  Just check out the following excerpt from a recent Time Magazine article…

Many of the people at the rally in Sevastopol were not just ready to believe. They were convinced of the imminent nationalist invasion. What scared them most were the right-wing political parties and militant groups that have played a role in Ukraine’s revolution. “What do you think they’re going to do with all those weapons they seized from police in Kiev? They’re going to come here and make war,” said Sergei Bochenko, who identified himself as the commander of a local militia group in Sevastopol called the Southern Russian Cossack Battalion.

In preparation, he said, his group of several hundred men had armed themselves with assault rifles and begun to train for battle. “There’s not a chance in hell we’re going to accept the rule of that fascist scum running around in Kiev with swastikas,” he said. That may be overstating the case. Nowhere in Ukraine has the uprising involved neo-Nazi groups, and no swastikas have appeared on the revolution’s insignia. But every one of the dozen or so people TIME spoke to in Sevastopol was certain that the revolt was run by fascists, most likely on the payroll of the U.S. State Department.

And just remember what happened back in 2008 in South Ossetia and Abkhazia.  The Russians have already shown that they are not afraid to militarily intervene in order to protect Russian citizens.

So what would the U.S. and the EU do if a war erupts between Russia and Ukraine?

Would they risk a direct military confrontation with Russia in order to help Ukraine?

I am very concerned about where all of this could be heading.